Well, here's some interesting news from the British Library:


'With something like a thrill we must record that probably the very germ and protoplasm of landscape art in Britain sprang from a king, and took form and shape in the very national heart of all the kingdom. Somewhere about the year 1550 the son and heir to King Henry VIII, afterwards King Edward VI (1537–1553), sat down in Windsor Park and drew and coloured a view of the Castle.' 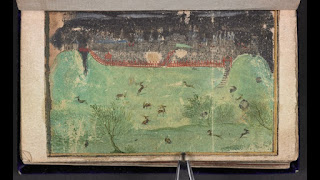 In fact this is not news but a quote from a book published over sixty years ago: Maurice Harold Grant's A Chronological History of the Old Landscape Painters (in oil), from the XVIth Century to the XIXth Century (8 vols, Leigh on Sea, 1957-1961), I, p. 31.  However, as the most recent blog post in the BL's excellent 'Picturing Places' series says, 'Grant’s suggestion that this image represents the first stirring of British landscape art has been universally ignored'.  Fred Smith has now looked again at the evidence that the sketch, pasted into the flyleaf of an edition of Myles Coverdale’s 1538 New Testament, may have been done by the future king.  For example, Edward is reported to have been proficient on the lute, but could he have also been taught how to draw?  On the landscape itself,


'Although Edward passed relatively little time at Windsor, he spent a prolonged period there on at least one occasion. Fearing unrest in the capital, Protector Somerset had conveyed the young king to Windsor for his safety in October 1549.  Having spent some days confined to the castle and its grounds, Edward reportedly likened it to a prison, complaining: ‘here be no galleries nor no gardens to walke in’.  Perhaps he took to drawing the castle to divert his attention?'

I have mentioned royal painters here before, from the Qianlong Emperor of China to Prince Eugen of Sweden, but have not been particularly interested in discussing the amateur efforts of our own royal family - Queen Victoria, for example, or Prince Charles (whose watercolours the Telegraph described as 'torpor-inducingly conventional').  This sketch though, if it is by Edward, would be fascinating as it is so early in the history of Western landscape art.  Unfortunately, there is evidence that it was not painted by the prince.  It looks as if it may have been copied from a background in Marcus Gheeraerts’s print 'Procession of the Knights of the Garter', published in 1576, after Edward's death.  Disappointing, although as Fred Smith says, such a conclusion still 'raises some intriguing questions. Where and when did the myth of Edward’s authorship originate?'  And, whoever painted it, there is something charming about those delicately sketched deer sitting, walking and jumping around on the turf, underneath the dark ramparts of the castle. 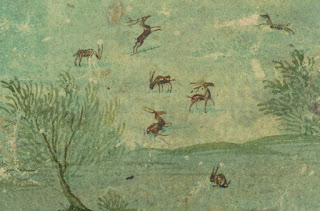