The other day I pulled out from my library the anthology Poems of Arab Andalusia that City Lights Books published back in 1989.  The translations were made by Cola Franzen (1923-2018) and she based them on an anthology that Emilio García Gómez (1905-95) published in 1930.  Those modern Spanish versions of Andalusian Arabic poetry influenced Spain's Generation of 27, in particular Lorca, whose Divan del Tamarit (unfinished when he was assasinated) uses some of their imagery.  Gómez was working from a medieval codex he acquired in 1928, Banners of the Champions and the Standards of the Distinguished, a collection put together by the great Andalusian writer and traveller Ibn Sa'id and completed on 21 June 1243.  There is frustratingly little information to be found in the anthology or online about the actual poets.  Of Muhammad ibn Ghalib al-Rusafi, for example, who wrote a lovely little poem called 'Blue River', we are just told that he died in 1177 and came from Ruzafa, now part of Valencia (a 'hip district', I see from Google, noted for its indie clothing boutiques and organic food shops). 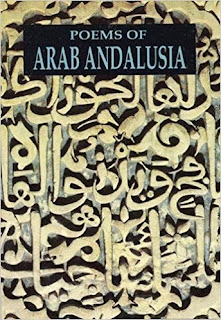 As usual on this blog, I'm reluctant to quote whole poems from a book for copyright reasons.  But here are some extracts - five examples of rivers in medieval Andalusian poems, beginning with that blue one:


The river of diaphanous waters
murmuring between its banks
would have you believe
it is a stream of pearls.
...

Rain Over The River

The wind does the delicate work
of a goldsmith
crimping water into mesh
for a coat of mail.
...

The Valley of Almería

...
See how excited the river is?
Listen to its murmured applause
sounding beneath the dancing trees
that arch over it

Tide in the Guadalquivir

When the West Wind ripped the river's tunic
the river overflowed its banks
to pursue and take revenge;

But the doves laughed, and made fun

from a sheltering thicket
....

...
Reflections of floating lights
pointed like lances
at the cuirasse of the river.

There we stayed until
the jewels of frost
forced us to separate.
...