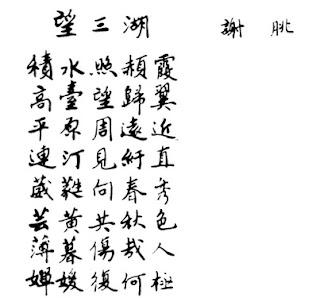 
I have previously devoted a post to Hsieh Ling-yün (Xie Lingyun, 385-433), known as the founder of the shan-shui ("rivers-and-mountains") tradition in Chinese poetry.  Here I want to focus on Hsieh T'iao (Xie Tiao), a younger kinsman also known for his landscape poetry, who lived from 464-499.  His work is not easy to find online and his Wikipedia entry is currently just a stub.  However, I have actually quoted one of his poems before, 'Viewing the Three Lakes' - 'Red clouds mirrored where the waters meet. / From the red terrace -- birds returning, / the encircling plains, mosaic of river isles. / Inklings of spring's luxuriance / as autumn's last yellows fade...'

Cynthia L. Chennault has written a study of Hsieh's work.  In The Indiana Companion to Traditional Chinese Literature, she says that his poetry 'is perhaps best known for the rich variety of ways in which it describes qualities of light'.  She points to two ways in which he developed the nature writing tradition in Chinese poetry:

Hsieh T'iao held various official posts and in 495 was made governor of Hsüan-ch'eng (Xuancheng).  'Hardly different from a hermit's life' he called it, with 'few law suits to hear on the grass-grown terrace.'  Hsieh built himself there a pavilion that would later feature in a poem by Li Po (Li Bai, 701-62) - 'Farewell to Uncle Yun, Imperial Librarian, at Xie Tiao Pavilion in Xuancheng'.  A century later another great poet, Tu Mu (Du Mu, 803-52), came to the city and saw Hsieh's old home.  There he wrote poems about Kai-yuan temple, built earlier in the T'ang Dynasty, long after Hsieh's time ('the brook's sound enters the dreams of monks, / and the moonlight glows on its stucco walls.')

Moving further ahead in time to 1170, another great poet, Lu Yu (Lu You, 1125-1209), visited Hsieh's old residence, and also the Southern capital of Chin-Ling (Jinling) where Hsieh had lived and written poetry.  There is a good article by Nathan Woolley, based on Lu's 'An Account of a Journey to Shu', of his time at Chin-Ling.  It quotes three of Hsieh's poems - here are the opening lines of 'About to Set Forth From Stone Fortress, I Ascend the Beacon-fire Loft':


Wavering and hesitant, I pine over the capital;
With dragging steps, I tread up to the storied loft.
Seen from a height, the palace grounds and gate towers seem close by,
But as I peer into the distance, windblown clouds are many.

Departure for Hsieh was hard when all he could see beyond the city was upsurging hills and a sea of dashing waves.

Ten poems by Hsieh appear in the anthology New Songs from a Jade Terrace (compiled 534-45) but none of them are 'landscape' poetry.  Five might be considered 'still life' - 'object poems' on a lamp, a candle, a bed, a mirror stand and falling plum blossom.  He also wrote a set of 'Songs of the Drum and Flute', dedicated to the Prince of Sui which Cynthia Chennault describes as charming early works. Arthur Waley translated one of them in his seminal anthology, A Hundred and Seventy Chinese Poems (1919), a 'Song of the Men of Chin-Ling' who are marching back to the capital.


The green canals of the city stretch on and on
And its high towers stretch up and up.
Flying gables lean over the bridle-road:
Drooping willows cover the Royal Aqueduct.

Hsieh T'iao did not make it into our sixth century - he died in prison in 499.  It was a sad echo of the fate of his predecessor Hsieh Ling-yün, who was executed following a third and final banishment from court.  A year before his death, Hsieh T'iao wrote a 'Poetic Essay Requiting a Kindness', addressed to his fellow poet Shen Yüeh (it is the subject of a 1990 article by Richard Mather).  After Hsieh's death, Shen wrote a lament for him.  'His melodies resound in tune with bells and lithophones; / His thoughts soar high above the winds and clouds.' 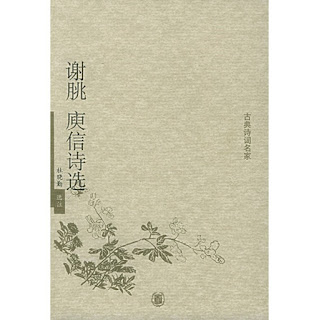 Chinese edition of The Selected Works of Xie Tiao and Yu Xin
Posted by Plinius at 9:37 am

Enjoy this blog. FYI, your Robinson Jeffers" link, on right, leads to a commercial page unrelated to RJ.

Thanks - ages since I checked those links. You are right - I have deleted it.