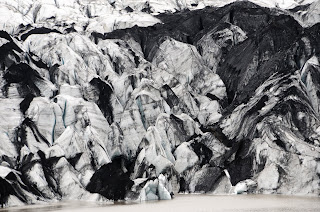 Sólheimajökull glacier, Iceland
Photographed by me in May 2019

After returning from Iceland recently I was keen to write something about its landscape but realised I had already covered a lot of the ground here previously - see for example 'An eagle, a mountain, a ship' and 'To Place: Verne's Journey'.  The photograph above was taken at a rapidly retreating glacier, beautifully sculpted by melting water and blackened by the underlying volcanic rock.  My excuse for including it here is a bit tenuous - it's that I was reading in Robert Macfarlane's new book Underland about glacier ice.  In Greenland he encounters a very different kind of black ice, dark from the compression of millenia, emerging 'from so deep down in time that it has lost all colour.'  As Colin Thubron writes in his review, this sight 'induces a kind of nausea.'


'The first block has fallen from the glacier’s face before he and his companions turn to look, and then an enormous white train seems to be driving out of its wall before plunging into the water, and it pulls white wagons after it, followed by the semblance of a cathedral and a whole fracturing city. ... Then, he adds, something terrible happens. A submerged, black pyramid of ancient, compacted ice rears up from the water as high as the glacier itself, a shape as hard as meteorite, and he and the others are dancing and shouting, “appalled and thrilled to have seen this repulsive, exquisite thing rise up that should never have surfaced.”'

An object like this can perhaps only be conveyed effectively in words.  Googling for images of black icebergs, I learned that a few years ago one particular photograph went viral - someone described it as 'goth as fuck' - and there was an article about it on the Smithsonian website.  Apparently 'flipped' icebergs, with the older parts on top, may become more common.  Glaciers no longer stretch into the cold seas but break apart at the edge of the land, "so you get these really thin pieces of ice that flip over right when they’ve broken off."  Nonetheless, this black iceberg was extremely rare, and the photographer considered himself incredibly lucky: "it’s like if you see a double rainbow over a whale breaching".  You can imagine Rob Macfarlane feeling equally lucky that the landscape had delivered up such a perfect metaphor for him.

When I got back from Iceland, several people at work asked if I had gone 'to see the northern lights'.  It brought home to me what a bucket-list tourist phenomenon this has become.  No, we had not, and I suspect that if I did organise such a trip it would only be disappointing.  One of my colleagues went recently, to Norway I think he said, and said it had been cloudy until the last night, when they finally experienced the sky flickering, but witnessed none of the green light you see on photographs.  In Greenland, Rob and his companions first experience the Northern Lights as 'a scarf of radar-green' with the mountains shooting 'jade searchlights into space.'  On another night it appears as 'green fog-banks, rolling, coalescing, ebbing.'  And finally, at the end of the trip, they see a display that is 'profuse, extravagant, spinning over thousands of miles of sky.'  The stars seem to shine more brightly through the aurora. It seems paradoxical - 'none of us can explain how the green light could be collaborative rather than competitive with the starlight.'

Collaboration is a key theme in Underland and one of the reasons why companionship is important on the trips it describes.  Rob is accompanied to Greenland by Helen Mort, 'a rock climber, a runner and a writer of rare abilities', and Bill Carslake, a composer who is able to hear notes in the sound of wind on the glacier ("it's the harmonic series of D!")  Nick Papadmitriou has complained that everyone encountered in Underland is 'imbued with a wisdom and roundness of character that marks them out as irritatingly exceptional human beings', but this is not a conventional travel book and there isn't space to develop proper portraits of people.  As a reader, part of the pleasure is trying to imagine travelling with Rob and his companions, coping with the exhausting ice peaks and crevasses, negotiating a dangerous scree slope and a narrow snow bridge, not to mention keeping pace conversationally with three erudite Cambridge graduates (a kind of intellectual Sublime).  I know I would not have made it far (I've an image of myself stuck on the glacier, driven mad with fear and exhaustion, like Leni Riefenstahl's husband in The White Hell of Pitz Palu, who has to be tied up for his own safety).  Fortunately, our holiday in Iceland presented no such hazards.  There were also many memorable sights in addition to the black and white Sólheimajökull glacier.  Nevertheless, I would love to have been on that beach in Greenland to witness the appearance of that extraordinary iceberg...

Twenty minutes after falling into the sea, it settles in the water.  Gulls land 'on this new territory in their dozens, shake out their wings, tuck one leg up into their breast feathers for warmth, hunker down.'  The next day Rob finds a small chunk of it, washed up on the shoreline and, with difficulty, lifts the dark ice and carries it back to the tents.


'The sun shines through it.  Air bubbles inside it show as silver: wormholes, right-angle bends, incredible zigzags and sharp layers.
That night an arctic fox comes to our camp, a playful blue shadow.
The little berg takes two days to melt.  It leaves a stain on the rock that won't vanish.'