In a 1995 interview with Claudia Spinelli, Roni Horn discusses her book To Place: Verne’s Journey (1995), with its photographs of the Icelandic landscape described by Jules Verne in Journey to the Centre of the Earth (1864). She says she wanted to reveal Verne’s fictional narrative “as the reality it is. Up to that point I was working with an intuition about the paradox of fiction. In the book the opening shot is an aerial photograph of the glacier which covers the entrance to the center of the earth. I zoomed in on the ice and cut to ground-level. At ground level you see all of these extraordinary geologic events. Now these are all things that just happen as a part of the mundane in Iceland. Verne's fiction is not a fiction at all. What he described, the entrance, the journey and I estimate the center of the earth as well, actually exists. But he was never in Iceland. So for him it was pure fiction.” 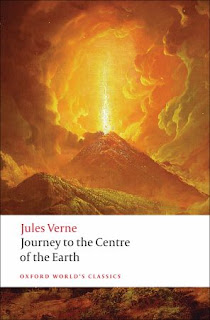 Journey to the Centre of the Earth (like the science fiction that followed it) is a blend of realism and fantasy. Verne’s descriptions of the geology of Iceland create the conditions for suspension of belief as Professor Lidenbrock and his nephew Axel begin their descent. In the OUP translation of Verne’s novel, they arrive in Iceland on page 47 and begin their descent into Snaefells on page 86, so almost a fifth of the book involves their journey through the ‘real’ landscape of lava flows and mountains. Eventually, when they reach the peak of Snaefells after an arduous climb, Axel looks down at the island spread out below him, with its deep valleys, endless glaciers and over to the west, the vast ocean. At the site of all this he ‘plunged into that high-blown ecstasy produced by lofty peaks’, his ‘dazzled eyes bathed in the clear irradiation of the sun’s rays...’ (trans. William Butcher)

In her survey of Roni Horn’s art in the Phaidon book I’ve talked about here before, Louise Neri quotes William Butcher’s introduction to Journey to the Centre of the Earth, where he describes Verne’s worldview in terms that fit Horn’s art practice: ‘An anthropomorphization of the Earth and a mechanization of the human, with the biological often acting as a go-between; an attempt at sensual “totalization” of the world; a constant scepticism; the undermining by juxtaposition, humour, and irony of any dogmatic view of existence; a metaphorization of everyday objects and ideas, which are often re-metaphorized or even de-metaphorized; a distinctive rhythm, made up of repetitions, silences, minor and major keys, counterpoint, and slow movements leading to explosive crescendos; and an innovative narrative technique, whether in the use of tense, person, point of view, voice or structure.’
Posted by Plinius at 12:05 pm