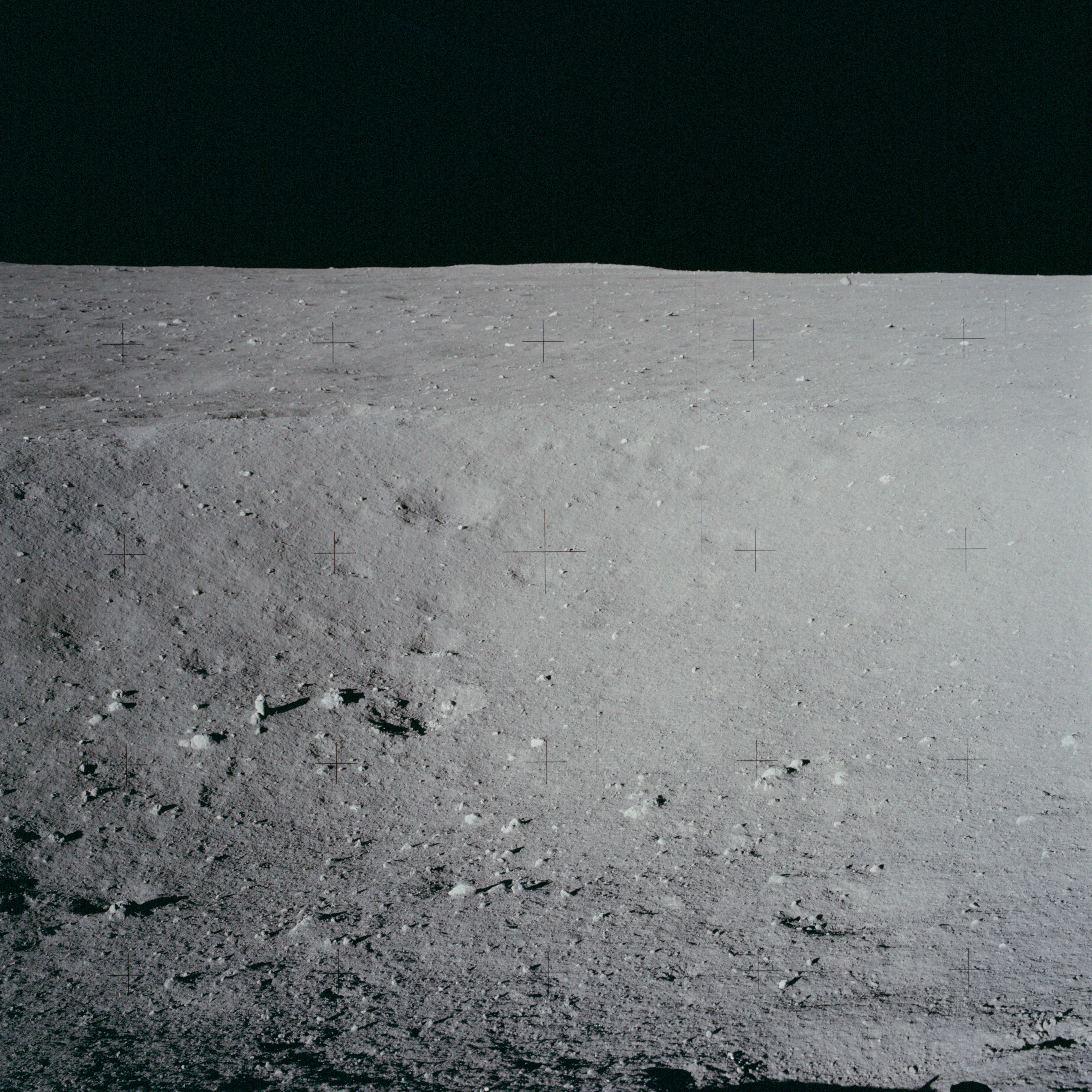 Apollo 11 Mission image - Lunar surface and horizon
Source: Internet Archive
Tomorrow is the fiftieth anniversary of the moon landing and it feels too momentous to let it pass without mention on this blog.  I have written here before about landscape art and poetry in which the moon plays a central role, like the poetry of Du Fu, the drawings of Samuel Palmer or the long-exposure photographs of Darron Almond.  I have also mentioned here the lunar landscape itself, as imagined by artists before the Apollo programme, like Chesley Bonestell who painted a mural for the Boston Museum of Science, and then photographed by astronauts from orbit and the surface of the moon.  Jonathan Jones (or his Guardian sub-editor) recently called the shots taken by Armstrong and Aldrin 'the greatest photographs ever'.  In Armstrong's images of Aldrin, 'his scientific work seems ritualised and meaningless. It’s the astonishing fact of being on this desolate landscape that we’re drawn to.' 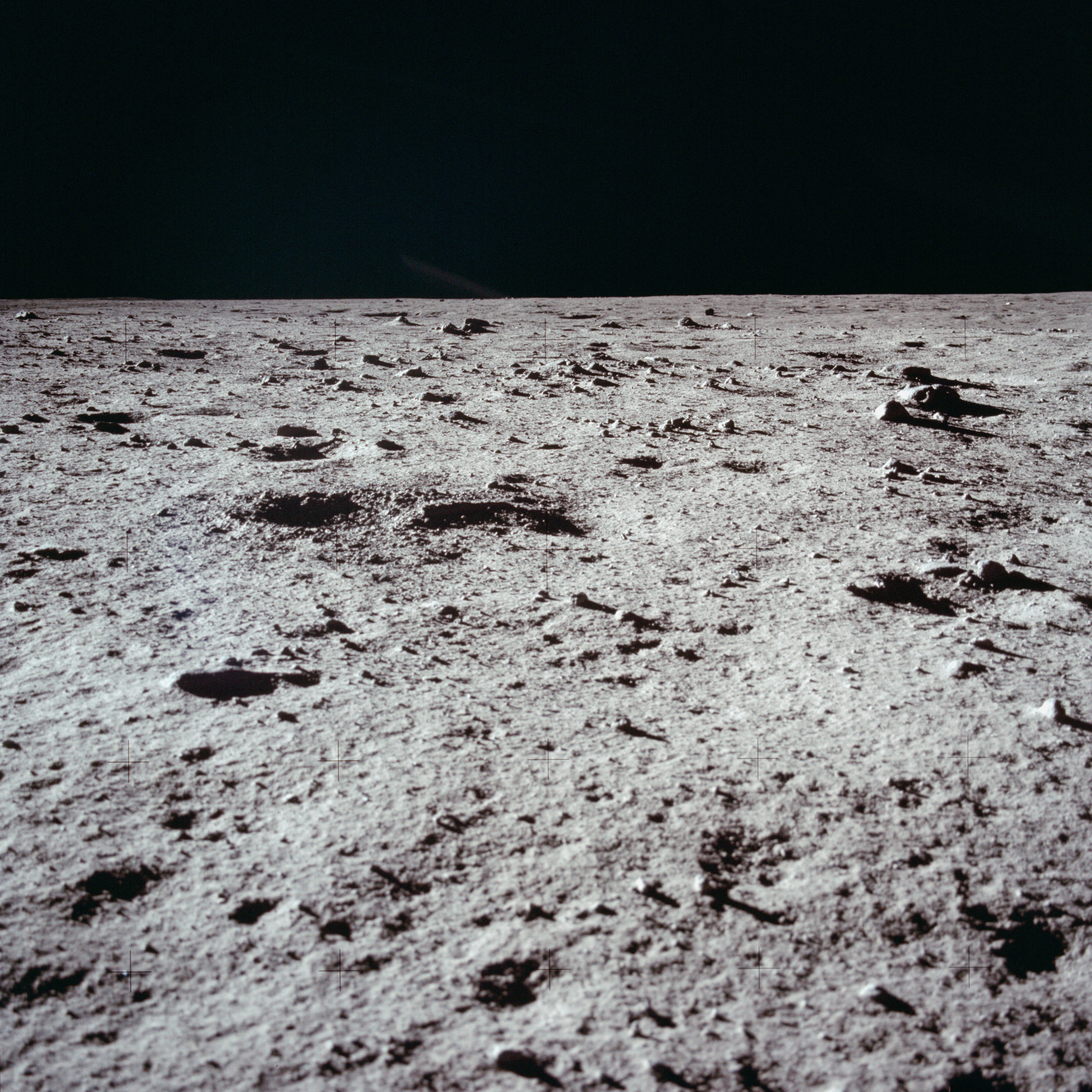 There are photographs of the moonscape from the Apollo 11 mission in which the astronauts do not feature.  They have an austere beauty, despite the absence of colour or any significant landforms.  The ones I have embedded here resemble Rothko's black paintings.  Paintings of the lunar surface have been made by the fourth man on the moon, Alan Bean, who pursued a career as an artist after retiring from NASA in 1981.  He has incorporated dust from the lunar surface into some of these. Here is what he has written about his influences:


"I have been inspired by other explorer artists such as Thomas Moran and Albert Bierstadt and Frederick Remington and Charles Russell. As the first artist on another world, I believe I am doing the same thing for the opening of the universe that they did for the opening of the American West, that my painting will satisfy the human need to record and remember new beginnings."


Naturally the anniversary of the moon landing has prompted various art events, like The Met's exhibition, 'Apollo's Muse'.  Last month, James Attlee wrote a piece on artists and the moon, appropriately for Apollo Magazine, mentioning the Katie Paterson piece I discussed here recently, Earth-Moon-Earth (Moonlight Sonata Reflected from the Surface of the Moon). Moon-related music is a theme at this year's Proms, which opens with Zosha Di Castri's 'Long Is the Journey - Short Is the Memory', a piece partly inspired by the famous moon poems of Sappho and Leopardi.  There's an acclaimed documentary that I haven't seen yet, Apollo 11, and many new or reissued books about the mission. The photograph below shows two of my own books - a Penguin Special published in 1969 that my father passed on to me and Andrew Chaikin's superb account of the Apollo programme.  Chaikin carries the story all the way through to Apollo 17 and it is noticeable how much emphasis there was on geology in those final missions.  With no life to discover, the moon landings became increasingly focused on the moon's grey landscape, and eventually there was not enough interest in this to keep the Apollo programme going. 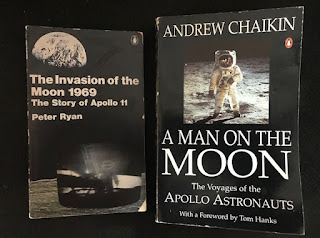 Email ThisBlogThis!Share to TwitterShare to FacebookShare to Pinterest
Labels: the moon