An eagle, a mountain, a ship 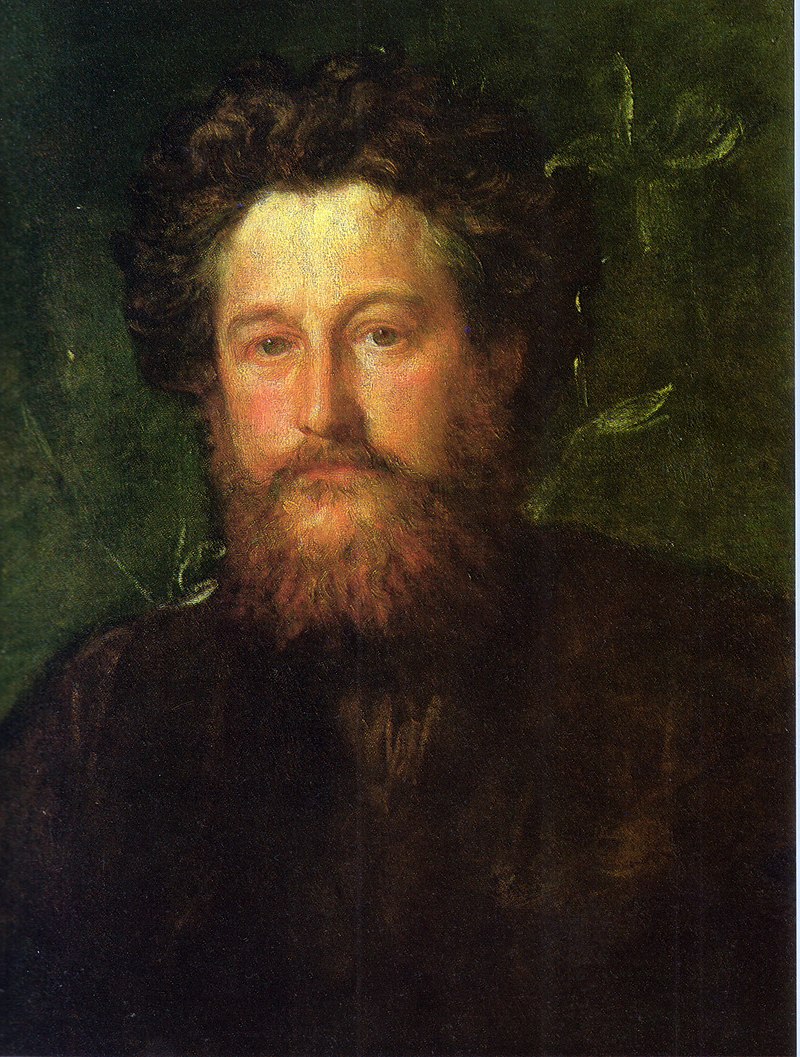 When, in the summer of 1996, the V&A held an exhibition to mark the centenary of the death of William Morris, it seemed rather out of tune with the times - Cool Britannia, the YBAs and all that.  This was years before Jeremy Deller used the heroic figure of Morris in his Venice Biennale exhibition and then juxtaposed the output of Morris and his company with Andy Warhol and The Factory.   Making my way round that V&A exhibition, I felt rather pleased and vindicated when I spotted Brett Anderson from Suede peering into a display case just in front of me.  Perhaps Jeremy Deller was there too, unknown to me then (as The Guardian explained, he 'was of the same generation as Damien Hirst and the YBAs, went to the same parties, but never made any money'.)  Now it occurs to me that perhaps it was Jeremy Deller I saw, as he does bear a certain resemblance to Brett Anderson.  Writing this I am painfully aware that 'seeing Brett Anderson' has become what I most remember about the exhibition, despite having enjoyed it and come home with the catalogue.  I probably knew at the time that this moment was something that would unavoidably 'strengthen into memory'...


— Getting clearer now as it wears

The worn-down landscape.  Torn and bald and filled.

You know what will strengthen into memory: an eagle, a mountain, a ship.

As a place becomes somewhere you are starting to remember, it empties out and becomes more absolute.

It becomes the map.

Is it after all you who studies the map? 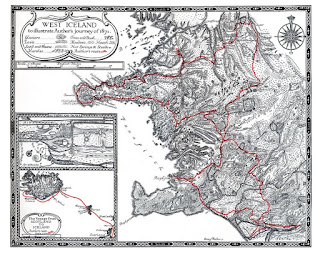 
In her book Questions of Travel, Lavinia Greenlaw extracts particular phrases in William Morris's Icelandic Journal and uses them to formulate brief observations on the nature of journeys.  The examples above are also questions of landscape: how we regard it, how we remember it afterwards.  They were prompted by the page in which Morris describes a ride across the plain of Helgafell:


.... The mountains we look back on, toothed and jagged in an indescribable but well-remembered manner, are very noble and solemn. As we rode along the winding path here we saw a strange sight: a huge eagle quite within gunshot of us, and not caring at all for man, flew across and across our path, always followed by a raven that seemed teazing and buffeting him: this was the first eagle I had ever seen free and on the wing, and it was a glorious sight, no less; the curves of his flight, as he swept close by us, with every pen of his wings clear against the sky was something not to be forgotten. Out at sea too we saw a brigantine pitching about in what I thought must be a rough sea enough. The day has been much like yesterday throughout, and is getting clearer now as it wears. 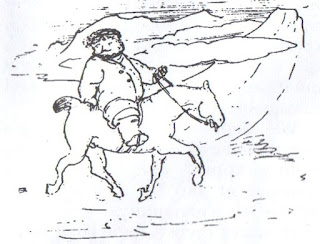 
When I picked up Questions of Travel (one of those appealing little hardbacks published by Notting Hill Editions), I recognised the title as a reference to the Elizabeth Bishop poem, but was expecting an account of a journey in the footsteps of William Morris.  I was probably thinking of Moon Country (1996) in which Simon Armitage and Glyn Maxwell travelled to Iceland in emulation of Auden and MacNiece.  However Lavinia Greenlaw says she was not on the trail of an earlier poet: 'I didn't go to Iceland because of Morris but, like him, because of my idea of the place.'  Morris, nonetheless, was very much inspired to travel by his reading - something that comes over clearly in the Iceland chapter of Fiona MacCarthy's wonderful 1994 Morris biography.  She describes him as 'certainly the first Englishman in Iceland who arrived with such a knowledge of its language and literature'.  Shortly after leaving Rejkjavik he was already noting the locations of Njáls saga and towards the end of the trip he tried out the hot-spring bath beside the house of Snorri Sturluson.  Helgafell is where the Laxdœla saga's extraordinary heroine Guðrún Ósvífursdóttir lived and was buried.  Morris also described this 'terrible place' in a letter home to his wife Janey.  His first impression was of 'a great sea of terribly inky mountains tossing about' but, he continued, 'there has been a most wonderful sunset this evening that turned them golden.' 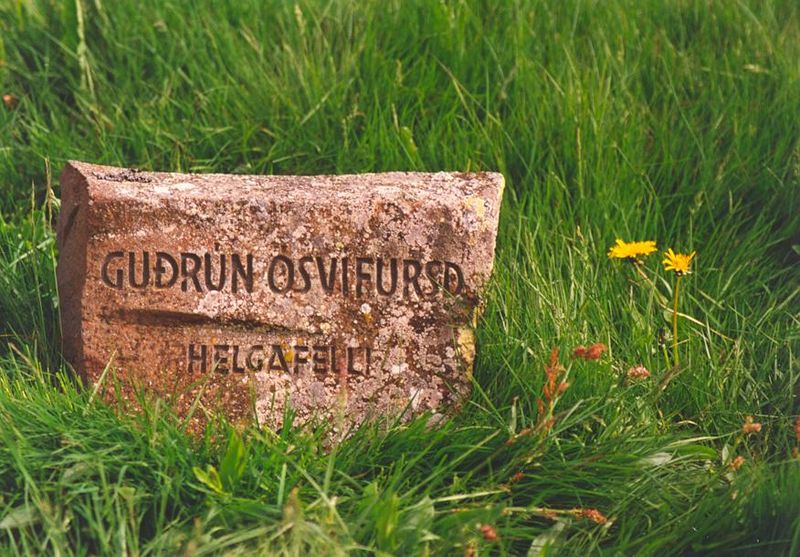 William Morris is quoted in Letters from Iceland and mentioned in Moon Country: at one point Armitage and Maxwell add their names to a visitor's book Morris had signed.  Shortly afterwards they find a piano Auden and MacNiece had played and sit down to attempt 'the one song they both knew, 'Perfect Day' by Lou Reed.'  In 1936, Auden had complained about the sameness of Icelandic music but 'got some gramophone records of more primitive local music, including an amazing one of a farmer and two children who yell as if they were at a football match.'  Simon Armitage brought his own supply of tapes, including Talking Heads, The Fall, The Smiths and, naturally, Björk.  Lavinia Greenlaw is reticent in the introduction to Questions of Travel about her own experiences of Iceland but one might guess, based on her extensive writings about music, that she took a pretty fine selection on the iPod.  Back in 1871, William Morris had to be happy with what music he encountered on the way.  One morning a 'little maiden' played a langspil - the ancient Icelandic fiddle - for him, 'but it was sadly out of tune.' 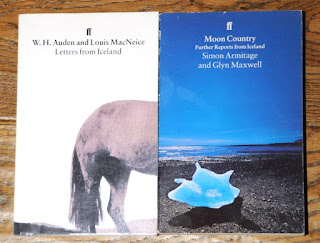 The Icelandic Journey has itself now been turned into music: a composition for chorus and orchestra, Earthly Paradise, by Ian McQueen.  Fiona MacCarthy wrote about in an article for The Guardian that also mentions Lavinia Greenlaw's then work-in-progress.  Morris's original poem 'The Earthly Paradise' 'was the work that brought him real fame. In this poem he develops one of his great themes: the ruination of the land. Morris had been watching with increasing horror the rampant industrialisation of Britain and the damage caused to the environment by uncontrolled factory production: poisoned air, polluted rivers, tracts of industrial waste. Iceland, by contrast, was purity itself, and his travels through the mountains braced him and inspired him for the years of environmental campaigning ahead.'  MacCarthy concludes her piece by wondering why it is that Morris retains his appeal to new generations of admirers.  'It has something to do with his peculiar, irascible, enchanting personality, still vivid in our age of triviality and blandness. At a time of endless half-truths and moral shilly-shallying, Morris's eccentric integrity shines out.'
Posted by Plinius at 6:58 pm