The Garden or Evening Mists 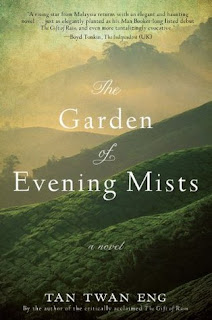 Tan Twan Eng's The Garden of Evening Mists is a novel that circles round various mysteries: the life and death of a Japanese garden designer, Aritomo, living after the war in exile in Malaya, and the location and purpose of a prison camp that he may have had some connection with.  The narrator of the novel, Yun Ling, a survivor of this camp, wants to create a garden in memory of her sister, who died there.  This sister had developed a fascination with Japanese gardens on a visit to Kyoto before the war.  Yun Ling goes to visit Aritomo, with the intention of asking him to design a memorial garden, but instead she becomes his apprentice, lover and then the inheritor of his own garden.  Aritomo begins her training with a copy of the Sakuteiki (which I mentioned here once before), written by Tachibana no Toshitsuna in the eleventh century, and explains to her various principles of Japanese gardening, such as shakkei ('borrowed scenery').  Later she writes that 'Aritomo could never resist employing the principles of Borrowed Scenery in everything he did' and the reader suspects something significant in this, that the landscape beyond the garden has some kind of special significance linked to their memories.

When Aritomo first explains shakkei to Yun Ling, he mentions Tenryuji, "Temple of the Sky Dragon, the first garden to ever use the techniques of shakkei."  Here's what I said about this garden, designed by the great poet Musō Soseki (1275-1351), in another earlier post:


'The temple of Tenryū-ji, was built by the shogun Ashikaga Takauji in memory of the emperor whom he had deposed.  Musō wrote a sequence of poems about the landscape garden he helped create there, 'Ten Scenes in the Dragon of Heaven Temple.'  Some of these scenes have survived the centuries, like the lake Sōgen-chi where moonlight still strikes the waters in the dead of night; others have gone, like Dragon-Gate House where Musō observed the most transient of images, two passing puffs of cloud.'

Aritomo goes on to list the four approaches to shakkei:  "Enshaku - distant borrowing - took in the mountains and the hills; Rinshaku used the features from a neighbour's property; Fushaku took from the terrain; and Gyoshaku brought in the clouds, the wind and the rain."  Years later, looking again at their garden, Yun Ling wonders whether the wind and clouds and ever changing light had been part of Aritomo's design.  And if the mists were an element of shakkei too, gradually thickening and erasing the distant mountains.
Posted by Plinius at 12:56 pm