The Shore of Sumiyoshi 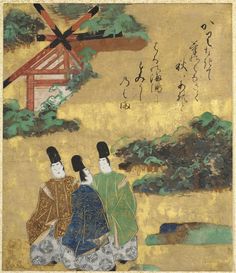 Tawaraya Sōtatsu, The Beach at Sumiyoshi,
from the 'Tales of Ise', c. 1600-40
The Cleveland Museum of Art

In the highly refined Heian dynasty culture of ninth century Japan, landscape was admired in ways that would not be seen in the West for nearly a thousand years.  Consider the 68th episode of The Tales of Ise (c. 900), concerning the journey to Izumi of the poet Ariwara no Narihira (825-80).  At Sumiyoshi beach, 'he was so moved by the scenery that he dismounted from his horse and sat down again and again to enjoy the lovely views.  One of his party proposed: 'Compose a poem with the phrase "the shore of Sumiyoshi" in it.'  The resulting poem in its five brief lines combines autumn and spring imagery, chrysanthemums, wild geese and the sea. 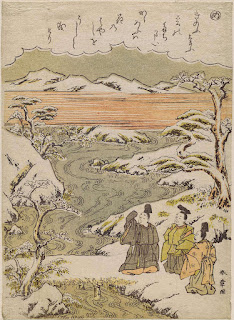 Peter Macmillan's recent (2016) translation of The Tales of Ise is a pleasure to read and includes fascinating explanatory material.  He notes, for example, that 'Episodes 66, 67 and 68 are all set along the shores of Osaka Bay and feature beautiful poems on the local scenery.'  In the 66th tale, 'The Sea of Life', Narihura stops with his friends by the shore and composes a poem on the boats in the bay, 'carrying us across / the sorrow-filled sea of life.'  And in the 67th, 'Snow Blossom', they see Mount Ikoma, revealed when the sky cleared.  Only then were he and his friends able to see 'the woods in snow blossom', the 'pristine white snow ' on the branches of the trees. I have included an eighteenth century illustration of this scene above. 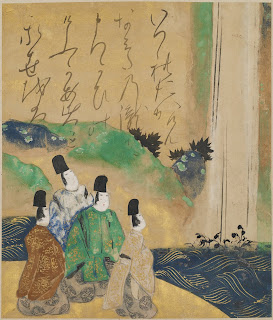 
Another episode involving admiration of scenery is 'Travels in Ashiya' (no. 87) - its theme, according to Peter Macmillan, is 'how excursions and the pleasures of the landscape can fill the heart with delight.'  The hero and his companions decide to climb the mountain to see the Nunobiki Waterfall.

'The rock face was a good two hundred feet high and fifty feet wide, and the water pouring over it made it look as if its whole surface was covered in rippling silk.  A rock the size of a round straw mat jutted out from the top of the falls, and water cascaded over it in huge drops the size of chestnuts and mandarin oranges.  The man invited everyone there to compose a poem on the waterfall...'

The resulting poems are good, but not as beautiful as the poem composed on their way home, as night fell and they could see firelight on the sea:

Are those stars on a cloudless night
or fireflies on the riverbank,
or are they the lights
of the fishermen's fires
in the direction of our home?