A place that exists only in moonlight 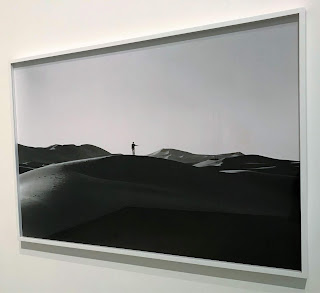 Katie Paterson, Inside this desert lies the tiniest grain of sand, 2010
Photography was permitted: this is my photograph of her photograph

We recently took the train down to Margate to see the exhibition A place that exists only in moonlight: Katie Paterson & J.M.W. Turner.  I last mentioned Paterson's work here nearly ten years ago when I saw her talk at a conference:


She described a work completed only last week, Inside this desert lies the tiniest grain of sand, which had involved returning to the Sahara desert a grain of sand that had been chiseled to 0.00005mm using the techniques of nanotechnology.  At extreme magnification the grain of sand resembled a planet and presumably the chiseling process could have created some nano-land art - a microscopic Spiral Jetty or near invisible Double Negative.  The point was made (by Brian Dillon) that she brings a necessary sense of humour to art that deals with cosmic scales of space and time.

As can be seen above, the Turner Contemporary exhibition included a large black and white photograph of this work, showing the artist returning her tiny artwork to the desert.

Most of Paterson's work has been on a cosmic or planetary scale and therefore doesn't really qualify as landscape art.  For example,
Turner's work was interspersed with Paterson's and included some marvellous studies inspired by light, such as Moonlight on the River (1826) and ? Boats at Sea (c. 1830-45), both from the Tate's collection. 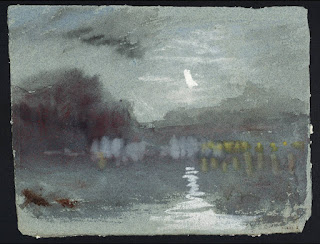 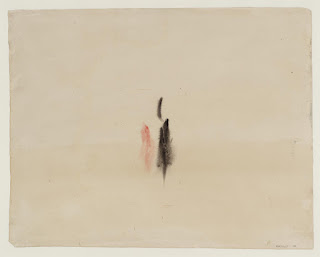 There is also a new book, A place that exists only in moonlight, published to coincide with the exhibition but oddly not on sale at the gallery itself (you have to send off for it and I have not (yet) done this).  It comprises short texts that describe artworks that can exist only in the imagination.  Some were placed on the wall, like the one below, which reads like a landscape haiku.  These reminded me of the work of her fellow Scottish artist-poets Thomas A. Clark and Alec Finlay.  As instructions for art projects, they are like the walking proposals of Richard Long, or indeed any of those texts of conceptual artists, writers and composers who have been interested in exploring space and time, light and substance.  Just one example that springs to mind as I write this: La Monte Young's Composition 1960 #15: 'This piece is little whirlpools out in the middle of the ocean.'  Someone could compile an anthology of such works, although they would probably seem less inspiring out of context.  Among the 'Ideas' on Katie Paterson's website, I particularly like A beach made with dust from spiral galaxies, Gravity released one unit at a time and, of course, A place that exists only in moonlight. 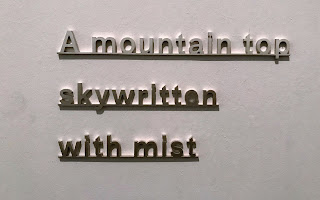 Too late: I'm pretty sure the book has sold out.