On Friday I got to see extracts from Patrick Keiller's forthcoming film, Robinson in Ruins, at the AHRC's 'Art and Environment' conference at Tate Britain.  Keiller has been making it as part of an interdisciplinary project for the Landscape and Environment programme.  With him to present and talk about the film were an all-star panel - Patrick Wright, Doreen Massey, Matthew Flintham and Iain Sinclair.  Each of these, apart from Sinclair, was involved in the project, but working in parallel rather than contributing directly to the film itself.  Robinson in Ruins looks similar to Robinson in Space, filmed this time around Oxfordshire and focusing on the financial crisis unfolding through 2008.  Vanessa Redgrave takes over from Paul Scofield as the narrator. The film documents sites of political or historical significance, like the woodland where Professor David Kelly committed suicide, interleaved with recurrent images - letter boxes, wind blown flowers, lichen growing on traffic signs. 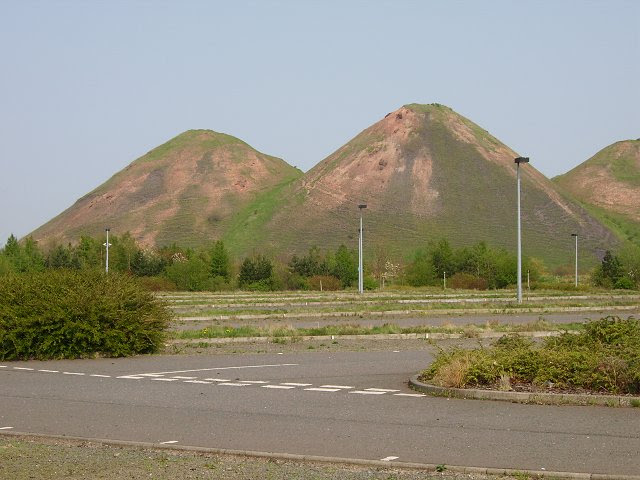 It was great to talk yesterday to some readers of this blog and enjoy a post-conference dinner in the sunlit landscape of St James Park with Kathryn and Jen (Kathryn Yusoff contributed a talk in the afternoon about the relationship between weather and climate).  Here, as promised, are a few quick impressions of the rest of the conference, which focused mainly on art and and had quite a lot to say about land art.  Richard Long's A Ten Mile Walk (1968), for example, was discussed by Nicholas Alfrey, who uncovered the historical landscape of Exmoor that the artist had traversed.  Craig Richardson talked about John Latham's involvement with the earthwork-like shale bings of West Lothian.  Ben Tufnell described Cai Guo Qiang's encounters with Spiral Jetty and Double Negative, and a trip to the Nevada testing site where the artist and his team managed to cause panic by detonating a small mushroom cloud.

The theme of artistic pilgrimage came up several times in different sessions.  Joy Sleeman described her trip to see Spiral Jetty and Sun Tunnels, finding there the idea of a pristine landscape (as described by Nancy Holt) belied by the evidence of some spent gun cartridges on the ground.  Brian Dillon re-told the story of his pilgrimage to Robert Smithson’s Monuments of Passaic and discussed examples of other recent artistic encounters with the ruins of modernism.  Spanish artist Lara Almarcegui talked about regularly re-visiting her own special site, A Wasteland in Rotterdam Harbour, 2003-2018.  Of course there is nothing new about footstepping earlier artists and Richard Wrigley began his presentation on the climate of the Roman Campagna with Corot's La promenade de Poussin. 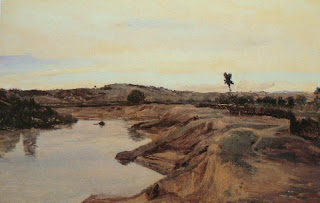 The landscapes imagined by Ballard, Tarkovsky, Sebald remain key influences - Matthew Gandy mentioned all of these in his talk (he included a bizarre photograph of a Ballardian luxury development in Argentina that has been inspired by the writings of Borges).  Russell Hoban's novel Riddley Walker, which imagines a post-apocalypse 'Inland' on the present landscape of Kent, is the source for a new work described yesterday by artist Heather Morison - a puppet show to be staged in Tasmania.  Heather and Ivan Morison travel the world making art but are based in Wales, where they own a wood and are creating an arboretum.  They also have a studio in Brighton where they are 'developing an atelier'.  Their approach somehow put me in mind of those glossy food/garden/design programmes on TV.  At one point we were shown a slide of the artists cooking for the locals in the manner of Hugh Fearnley-Wittenstall - the Morisons had designed their own burger and named it a 'J.G.' in honour of Ballard (I didn't manage to note down the ingredients).

More interesting to me was Katie Paterson, whose work was discussed in a session on the Sublime. She described a work completed only last week, Inside this desert lies the tiniest grain of sand, which had involved returning to the Sahara desert a grain of sand that had been chiseled to 0.00005mm using the techniques of nanotechnology.  At extreme magnification the grain of sand resembled a planet and presumably the chiseling process could have created some nano-land art - a microscopic Spiral Jetty or near invisible Double Negative.  The point was made (by Brian Dillon) that she brings a necessary sense of humour to art that deals with cosmic scales of space and time.  This idea was reinforced near the end of the conference when Simon Faithfull showed his film of a domestic chair lifted to the edge of space by a weather balloon (see below). He also showed extracts from 0°00 Navigation, a Keaton-esque journey from the Channel to the North Sea along the Greenwich Meridian.  The clip below shows a section of this epic journey starting with the artist climbing undaunted through the back gardens of East Grinstead. Watching this it was hard not to think back to Richard Long, negotiating the obstacles of Exmoor, climbing doggedly over fences and sticking rigidly to the straight line on his Ordinance Survey Map.

Hello, I thought I would leave a comment as I couldn't see an email address anywhere. I was hopping along a few blogs and got to yours. I have been attempting to create some landscapes of my own and I think your blog could potentially be a great resource for my investigations, there are some great posts and links here and I have merely skimmed across it. Just in case you were curious here is my latest "landscape": http://www.youtube.com/watch?v=p0J6rvpsitE

As you may or may not be able to tell from the footage / description , it has a its raw footage a shot from a cam model's show (heavily edited and "Suitable For Work"). Any thoughts / criticism you may have is welcome, but absolutely not expected. I will nonetheless be popping back to your blog from time to time. The link to "On the Sublime & Beautiful" is much appreciated.

So excited to see the next instalment of Robinson!