The sun is slowly eclipsed

I wrote here a few weeks ago about two of the Tacita Dean exhibitions in London this year; this post is about the third one, 'Landscapes', at the Royal Academy.  The first thing that will strike any visitor is the venue itself, the new RA extension, and (if you're my age) a feeling of déjà vu as you realise you're entering what was once the Museum of Mankind.  Then, the first room is full of clouds.  They were all created on slate, using spray chalk, gouache and charcoal pencil.  These obviously stand in the long tradition of artist cloud studies - Cozens, Constable, Stieglitz - but are immediately recognisable as the kind of blackboard drawing she became well known for in the nineties (her Turner Prize nomination was twenty years ago).  One cloud triptych is called Bless Our Europe and another Where England?  I found myself thinking about the chalk cliffs I wrote about in Frozen Air and the way clouds float freely over national borders.

Beside these cloud studies, a whole wall is taken up by one of Dean's large-scale mountain drawings, The Montafon Letter (2017).  Here the brief textual annotations, which are a feature of her work in different media, come from the account of a devastating avalanche that took place in 1689.  A priest tending to the dying was buried by falling snow, but then unburied when another avalanche struck, and survived.  There is a photograph of Tacita Dean working on this, accompanying an interesting Guardian interview prior to the opening of this exhibition.  Another mountain scene dominates the second room: Quarantania (2018).  This shows a forbidding rock wall under a blood red sky - Mt. Quanrantania is the site in the Judean Desert where the devil is said to have tempted Jesus.  The image was constructed by manipulating early photographs and above the desert floor there is a kind of blurred mirage effect.

In the final room you can watch Antigone, a new hour-long film which Tacita Dean has finally completed after one false start and many years reflecting on its underlying themes.  Landscape footage (which is of most relevance to the subject of this blog) is set alongside various approaches to the story of Antigone and her father, so that, for example, two bubbling volcanic vents remind you of the blind eyes of Oedipus.  In the catalogue she explains that:


'Antigone has taken form as a result of the inherent blindness of film. Using masking inside the camera's aperture gate, I filmed one part of the film frame before rewinding the camera to film another part. This meant that the film was composed without the possibility of seeing what was already exposed in the frame. So Bodmin Moor under February drizzle sat in blind relationship with the shores of the Mississippi or geysers in Yellowstone with the total eclipse of the Sun. Only when I returned to California in the late Summer of 2017 and processed and printed my rolls of negative, did the film revealed itself to me.' 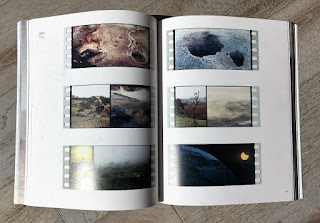 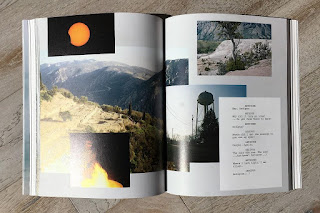 Sunlight on the catalogue for Landscapes, showing pages related to Antigone

Adrian Searle, in his Guardian review, said that 'it is impossible to do justice' to this film.


'We visit the floodplains of the Mississippi in Wyoming, the town of Thebes, Illinois, and the courthouse where Abraham Lincoln first practiced. Here we meet Anne Carson and actor Stephen Dillane.  For much of the film, Dillane is an Oedipus blinded by tinted glasses made for viewing the eclipse, and wearing a huge, straggly beard. He maunders across the world as though without purpose, at one point followed by a pair of curious dogs. As he walks out of frame, the dogs start copulating. Think ZZ Top. Think Saint Jerome. Think Harry Dean Stanton in the film Paris, Texas. A man on a mission, escaping his fate. Eagles circle the sky, their call a distant mewing. There are vultures and a crow stalks the horizon. Every moment of Antigone is a confusion, a complexity and a delight – a rich muddled stew of words and images, places and atmospheres. And through the imaginary day on which everything takes place, the sun is slowly eclipsed.'

I know what he means about ZZ Top, although I was thinking more of Warren Ellis from The Bad Seeds.  Those eclipse glasses were like the distinctive sun goggles in Herzog's Fata Morgana and the split-screen wandering of Oedipus reminded me of Ori Gersht's film about the last walk of Walter Benjamin, Evaders.  The idea of filming in Thebes, Illinois may seem a bit forced, but its old courthouse was a wonderfully atmospheric setting.  The whole film is worth seeing just for the way the early evening light falls on its old books and floorboards, and for the view across the river of the sun glowing and setting behind distant trees.  I would recommend arriving at the start (there's a showing every hour) and trying to get a front seat.  We did, and were engrossed by Antigone from start to finish.
Posted by Plinius at 10:55 am