Potted landscapes on the Tōkaidō 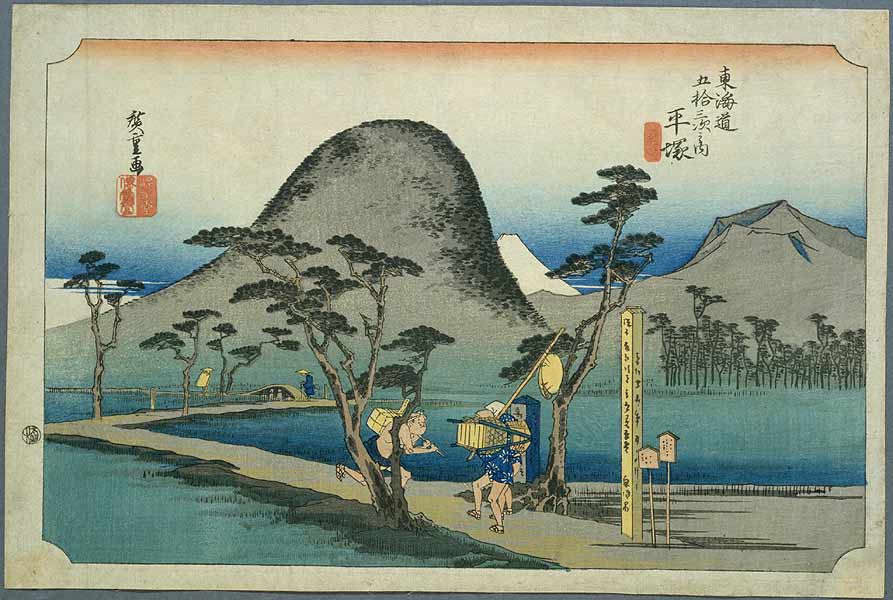 The Public Domain Review is a constant source of fascinating material and I thought I'd share here something I read about there recently, a book called Tokaido Gojusan-eki Hachiyama Edyu.


Connecting Edo (now known as Tokyo) to Kyoto, the Tōkaidō road was the most important of the “Five Routes” in Edo-period Japan. This coastal road and its fifty-three stations has been the subject of both art and literature, perhaps most famously depicted by the Japanese artist Utagawa Hiroshige in his The Fifty-three Stations of the Tōkaidō, a series of ukiyo-e woodcut prints created in the 1830s. This book from the mid-19th century, Tokaido Gojusan-eki Hachiyama Edyu, presents a series of fifty-three prints created by a relatively obscure ukiyo-e artist named Utagawa Yoshishige, each illustration depicting a Tōkaidō station in the form of a potted landscape. The preface tells us that the illustrations are based on actual pieces constructed by the preface writer’s father, Kimura Tōsen. Creating the models in 1847, a year before publication, Tōsen commissioned Utagawa Yoshishige to make illustrations of each model for a book through which he could share them with the world, and (due to his modesty) asked his son to write the preface.

The Public Domain Review article doesn't identify Kimura Tōsen's landscapes, but you can puzzle them out.  The image below is clearly a view of Hiratsuka - I have reproduced Hiroshige's version above. The other two examples below are (I think) Chiryū (No. 39, scene of a horse fair) and Kanbara (No. 15, a snow scene). Here landscape has been refracted first through the prints of Hiroshige, then through the tray landscapes of Tōsen and then once again through the medium of print, a trace of a trace of a trace of the views from the Tōkaidō road. 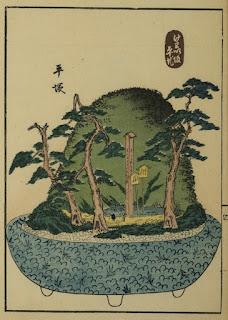 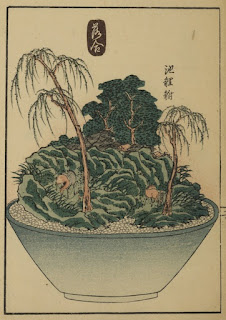 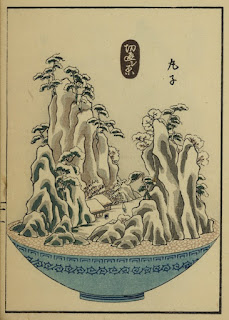 The article goes on to explain that of the two main types of Japanese potted landscape, these are likely to have been bonkei - sculpted models featuring people or buildings - as opposed to saikei in which real miniature trees and plants would grow.  The art of creating miniature landscapes was widespread and there were versions of it in China (penjing) and Vietnam (hòn non bộ).  The Wikipedia article refers as well to the Western model railway, a form of landscape art I have so far neglected on this blog!  In Japan there is another related art form, bonseki, in which sand and rocks are used to make a landscape on a black lacquer tray.  Below I have included three examples of women making bonseki tray landscapes, concluding with a recent Youtube clip showing the use of special tools and materials.  These bonseki could be seen as a subgenre of sand art, which reminds me of another childhood pursuit that I've never mentioned here, the art of the sand castle.  Perhaps next time we are on a beach I will have a go at some of the Fifty-three stations of the Tōkaidō... 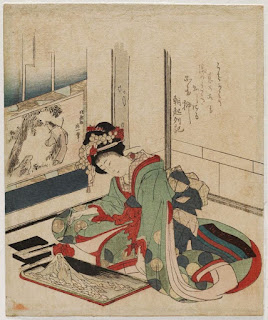 I have owned 4 prints by Yoshishige for many years, believing them to be scenes initiated by the artist. It was not until I read your blog that I realized they were representations of actual pieces (bonkei) constructed by Tosen. These potted landscape Illustrations are treasures.
Thank you for opening my eyes!
Liz Pendleton
June 22, 2021
Virginia