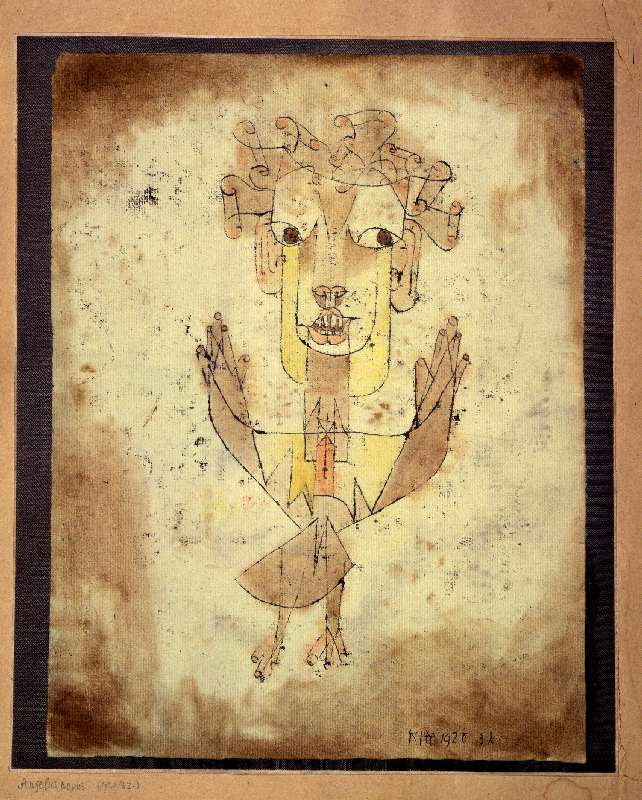 'A Klee painting named Angelus Novus shows an angel looking as though he is about to move away from something he is fixedly contemplating. His eyes are staring, his mouth is open, his wings are spread. This is how one pictures the angel of history. His face is turned toward the past. Where we perceive a chain of events, he sees one single catastrophe which keeps piling wreckage upon wreckage and hurls it in front of his feet. The angel would like to stay, awaken the dead, and make whole what has been smashed. But a storm is blowing from Paradise; it has got caught in his wings with such violence that the angel can no longer close them. The storm irresistibly propels him into the future to which his back is turned, while the pile of debris before him grows skyward. This storm is what we call progress.'  - Walter Benjamin, 'Theses on the Philosophy of History'


A couple of months ago I was in Eastbourne to see the exhibition Ori Gersht: Don’t Look Back. It included his two-screen film, Evaders, a reimagining of the last journey of Walter Benjamin.  The film begins with an actor in a hotel room and we hear Benjamin's famous description of the angel of history.  When the voice-over reaches “his face is turned toward the past”, the other screen is activated.  Now the actor is trudging through the cold mountains, battered by the weather, looking older than Benjamin actually was in 1940 (but Benjamin was physically frail and encumbered by a heavy suitcase). ‘He moves at a steady, laboured pace through patches of mist, along a snowy tree-lined path. Often, on the right screen majestic landscapes contrast with the man’s suffering and vulnerability on the left: sweeping mountain vistas grazed by clouds, trees shrouded in fog, craggy boulders, and the wind whipping over a riverbed’ (Al Miner, Ori Gersht: History Repeating).  The route taken by Benjamin was  'particularly dangerous because of the tramontana, a violently strong, dry wind that can last for days and is, in the cooler months, bitterly cold. The tramontana is known for its piercing moan, and locals attribute murders and suicides to long exposure to the sound.’  Benjamin survived the journey but at Portbou, on the border of France and Spain (as I wrote here a few years ago), exhausted and fearing repatriation, he took his own life with an overdose of morphine tablets.

In 2005 Ori Gersht travelled to Kosov in Ukraine, the birthplace of his father-in-law, who hid there for from the Germans two and a half years after the village had been declared “Judenrein” (cleansed of Jews).  The blurred Richter-like photographs Gersht took raise similar questions about the representation of such places as the Sally Mann Civil War landscapes I wrote about here a few years ago.  Gersht explained his decision not to photograph what he saw in a clear, objective way: ‘the camera can only depict the here and now, in this instance a pastoral Brueghelesque landscape, but my experience of these places was conditioned by what I knew…’ Steven Bode puts it well in an essay in the book to accompany Gersht's exhibition The Clearing: ‘the ghostly indeterminacy of the majority of the images, rather than reading as portentous, seems more redolent, at times, of feelings of uncertainty and doubt. Is this landscape as haunted, and as loaded, as he himself sees it? Have these places retained any traces of what happened over sixty years ago? And if not, how can they be made to communicate, so that the memory of what once went on there is not to be forgotten?’

On the same journey Gersht made a film in the Moskolovka Forest (see the clip below).  The setting, a site of Nazi atrocities during the war, reminded me of Simon Schama's Landscape and Memory ('Blood in the Forest') and the histories, myths and ideologies associated with Europe's ancient woodlands.  In Forest trees are felled, crashing slowly to the ground with a sound that reverberated around the gallery.  In between these moments, birdsong can be heard again as the camera remains still or pans slowly across the tall trunks, leaving you wondering which one will be next.  We never see the men whose actions result in the death of these trees.  Whilst it is, in Al Miner's words, ‘an elegy for the nameless dead who were lost in wartime atrocities, the piece also enacts the kind of ceaseless vigil that will be needed if these crimes are not to be repeated.’