Next month a Joan Jonas retrospective is due to open at Tate Modern - you can read an interview in Tate Etc.  I should probably wait and see this before writing about her work here, but I just found the beginnings of a blog post I started years ago on her Jones Beach Piece and it got me looking online again to see what there is to be read about her work.  My original interest in Jones Beach Piece was an idea that it might have constituted a new form of landscape art, one in which the landscape is used to separate the art from the audience.  The beach was not just the setting for a performance, it was a medium through which the art had to be perceived.  The performers were deliberately situating themselves in a subordinate role to the landscape, like those small figures of shepherds in seventeenth century pastoral paintings.  Here's how she described her early outdoor performances in Interview Magazine.


'The first performance outdoors happened at Jones Beach [Jones Beach Piece, 1970]. It was based on the idea of how our perception of image and movement is altered by distance. A group of us performed a series of choreographed movements and signals with simple props such as a six-foot metal hoop, a ladder, a rope, a bag of shells, and a shovel. For instance, Susan Rothenberg, tied into the hoop, was rolled about by George Trakas and John Erdman. The audience was a quarter of a mile away. Performers stood at different distances from the audience and clapped blocks of wood together over their heads. The farther away, the greater the sound delay.

We next performed this work on the empty lots and the docks of the Lower West Side. It was called Delay Delay [1972]. We performed similar actions signaling to each other and the audience—who was situated on what is now the roof of Richard Serra’s loft building—from the farthest ends of the docks and the edges of the lots. Carol Gooden and Gordon Matta-Clark spent the entire performance painting a big circle and a line in the street below. Their dog sat nearby watching. Cars would slowly approach, slow down, and drive by carefully. During these performances, we were never interfered with. It was a different time.'

Ah, would that we could all have experienced New York City in the seventies!  That Interview interview is worth reading in full for quotes like this: "I remember Gordon Matta-Clark liked to wrestle..."


Among the more recent works Joan Jonas has made, there are two worth mentioning here which were inspired by Iceland. Volcano Saga was originally narrated by the artist but then turned into a video piece, with Tilda Swinton in the role of Guðrún from the thirteenth century Laxdaela Saga.  More recently she has developed Reanimation, a work inspired by the Halldór Laxness novel Under the Glacier.  Neither of these source books has much about Iceland's landscape, although the sites of Laxdaela Saga have become landmarks and there are some brief descriptions in Laxness.  It is hard though to imagine making art about Iceland that does not feature its glaciers, lava flows and sea cliffs, and both Jonas installations included scenes shot around the island.  You can watch Volcano Saga in the embedded clip above, and here is a description in The New Yorker of 'Reanimation.'


'What began as a lecture-performance at M.I.T., in 2010, has evolved into a multiscreen extravaganza surrounding a sculpture of dangling prismatic crystals, which sends flashes of light darting onto projections of glacial landscapes and the occasional seal, filmed in an archipelago in the Arctic Circle. Jonas also appears onscreen, drawing with black ink and with ice. The spellbinding piece is non-narrative, with no sense of beginning or end. As long as you remain in this world, Jonas seems to suggest, you’re still just passing through.' 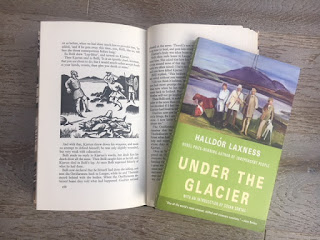 My copies of Laxdaela Saga  - a Folio edition of the Magnusson/Pálsson translation with Peter Pendrey wood-cuts - and Under the Glacier, with one of those evocative Louisa Matthíasdóttir paintings that Vintage use for the covers of their Laxness translations.
Posted by Plinius at 5:35 pm

An "off topic" comment, as they say: You may not be bothered by this, but are you aware that following a link from within your posts opens it in the same tab as your post? Personally, I find this disruptive of the flow of reading, and I'm sure *some* readers may choose to carry on down the rabbit-hole that has opened up, rather than return.

This is easily fixed. In Blogger, the dialogue that embeds the link includes a tickbox "Open this link in a new window". Tick this, and both your post and the linked content will be open in separate browser tabs.

Thanks Mike I will do that in future. It's a shame there isn't a general setting for it, but I guess you have to do it this way as it's part of the html.