Last week we went to the reopened Hayward Gallery for its big Andreas Gursky retrospective.  Twenty years ago, everyone seemed to be talking about Gursky: there was, for example, a show at the Serpentine in 1999, and a year earlier he won the Photographers Gallery Citibank Prize (now called the Deutsche Börse Prize).  'This is an artist whose time it appears has come,' wrote Robin Muir, 'as anyone would attest who was held up in the bottleneck of admirers lingering over his floor-to-ceiling pictures at the show of shortlisted Citibank entries in March' (I would have been one of those admirers).  Photographs from that time, like Salerno (1990) and Paris, Montparnasse (1993), have became famous, whilst Rhein II (1999) and 99 Cent II Dyptich (2001) both broke auction records for the world's most expensive photograph (my friend Tom has a print of the latter up in his kitchen and I suspect he is not alone in this...)  All these years later I was curious to see what Gursky has been doing recently and whether he had found new approaches to landscape photography beyond such spectacular, digital-altered compositions as Bahrain I (2005), in which a desert race track was turned into something resembling an abstract painting. 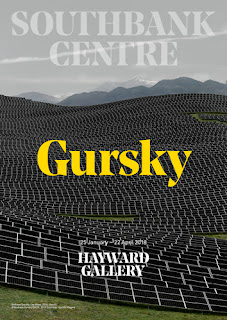 Many of the recent works on show at the Hayward are fictionalised tableaux, a new direction certainly, but not as immediately likeable as his early work.  I confess I struggled to get the point of SH I, in which a superhero (Iron Man) and his love interest are seen embracing on a tropical beach.  But Gursky is also still photographing scenes of the technological sublime, such as Les Mées (2016), a striking view of a solar farm covering a hillside in France that is reproduced on the exhibition poster (above).  The most recent photograph in the show is also a landscape image, Utah (2017), and it certainly impressed The Guardian's critic, Laura Cumming:


'The show’s masterpiece is unlike almost anything Gursky has made before. It is a new work, a single shot of some prefab houses skimmed on a mobile phone while driving through Utah. The photograph registers the speed of the car racing through the landscape – and modern life – in all its random glitches and blurs. At the same time, the houses look perilously ephemeral against the ancient mountains behind them. This fragile little thing, a spontaneous and disposable shot, is enlarged to the size of a cinema screen – a monumental homage to the mobile phone and the outsize role it plays in depicting our times'

Leaving the exhibition I found myself thinking how much I still love Gursky's earliest photographs.  They reminded me of my most recent trip to The Photographers Gallery, to see 'Wim Wenders' Polaroids', although of course Gursky's views of West Germany are on a much larger scale.  Anglers, Mülheim (1989), for example, is an impressive take on our modern landscape, a place neither urban or rural.  Greg Hilty described it well in his essay for the catalogue of another 1990s exhibition, Tate Liverpool's 'Andreas Gursky: Images' (1995).


'Two groups of fishermen sit on the banks of a quiet river, some distance apart, in uneasy relation to each other and to their pseudo-idyllic surroundings.  In the distance we glimpse a motorway bridge, leading into the space behind the trees in front of which the anglers sit.  We know we're on the fringes of a town, we can hear the cars in the distance, smell the pollution of the river, almost pick out litter in the woods.  The site, like those in other works from the period, is on the margins in both social and pictorial terms.  What meaning the picture holds derives not from any incident portrayed, but from the relation of what we see to what we cannot see, but understand to be there.'

I've been aware of Gursky for a long time, but had never seen the work "live", and was astonished at quite how big it is. Unnecessarily so, really: the resolution of the work generally breaks down on closer inspection, so the impression of seething detail within the landscape is often illusory. Smaller prints (oh, let's say, just *ten* feet across...) would give both the broad brush impression and preserve the photographic detail.

We, too, didn't warm to some of the later, constructed works (although I really liked the "four chancellors"). As so often with constructed photography, it seems to expose the shortcomings of an artist who is essentially a "noticer" of the real world when trying to become a creator of imagined worlds without lapsing into kitsch or cliché. The required skillsets are equal, but different, and rarely possessed by the same person.

Great show, though. My partner loved "Krefeld, Chickens", a mere A3 or so in size...

The Utah picture is beautiful. Thanks for pointing me to it: http://de.phaidon.com/agenda/photography/articles/2018/february/07/ralph-rugoff-takes-us-around-his-andreas-gursky-show/