This beautiful winter scene was painted by the great Japanese haiku poet and artist, Yosa Buson.  It depicts a famous moment in Three Kingdoms, the epic Chinese novel describing real events at the end of the Han Dynasty.  The warlord Liu Bei has come to the 'thatched hut' of Zhuge Liang, the 'Crouching Dragon', to ask whether he will join him as an advisor.  Liu Bei is accompanied in this painting by his two oath brothers, Guan Yu (traditionally depicted with a red face and luxurious beard) and Zhang Fei.  These three and Zhuge Liang (also known as Kongming) have been depicted over and over again in books, plays, films, comic books and video games, along with their adversary Cao Cao (whose poetry I wrote about here last year).  Zhuge Liang was revered as a Chinese Ulysses, a great tactician, minister and inventor.  Moss Roberts, the translator of Three Kingdoms, describes him as a combination of Machiavelli, Clausewitz and Leonardo da Vinci.  But when Liu Bei came to call on him in the year 207, he was just a young scholar with a brilliant reputation. 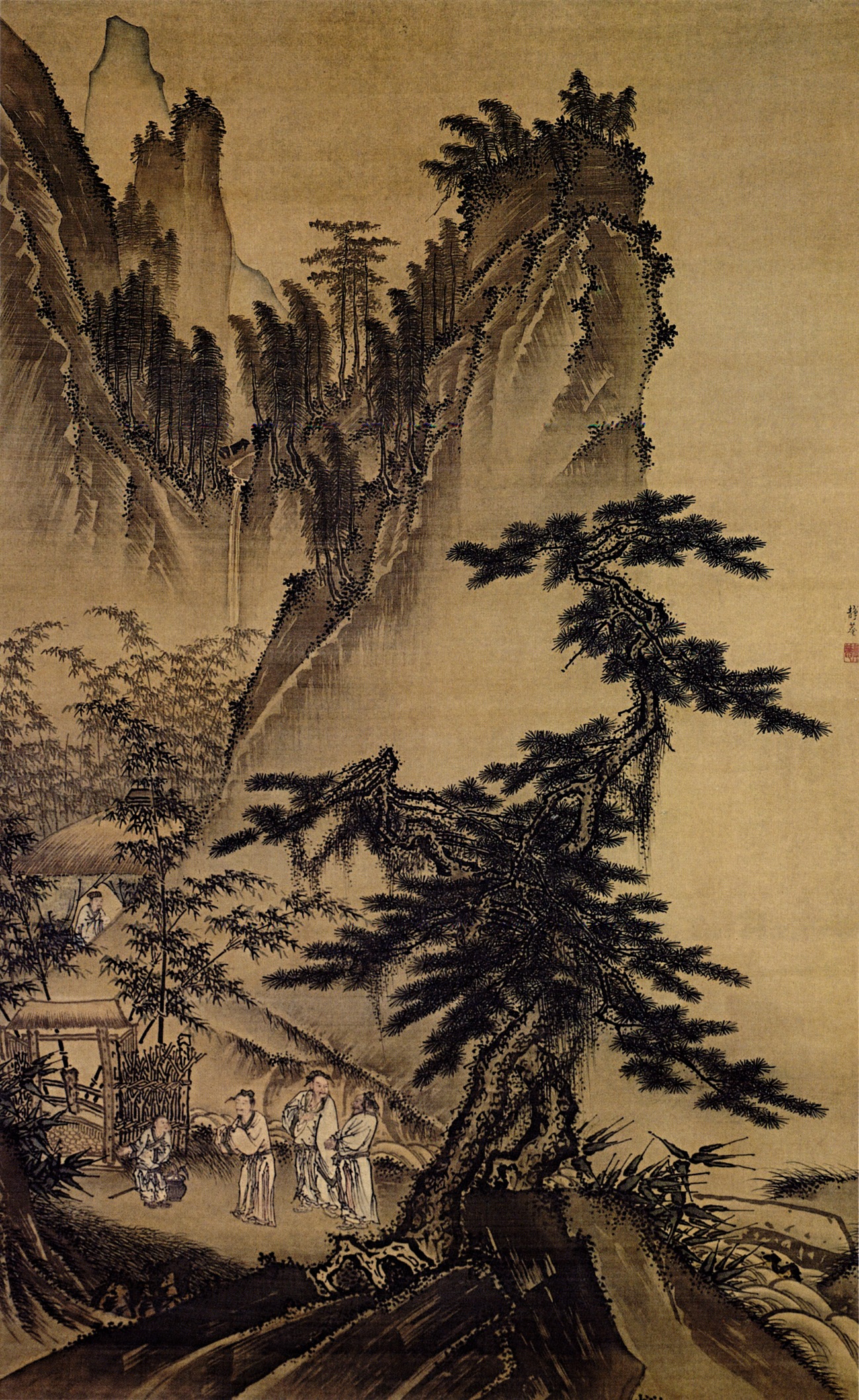 The painting above, is by Dai Jin (Tai Chin) and dates from roughly the same period as the Three Kingdoms. Dai Jin's hanging scroll shows the same three characters being met at the gate by a boy, while Kongming can be glimpsed inside.  The titles of these pictures refer to the fact that Liu Bei made three trips to the thatched hut before Kongming made an appearance.  The first time he was told by the young boy that the master was not around and that his movements were uncertain.  On the second attempt, in the dead of winter, he encountered Kongming's brother but again was told that the master was away.  On the third, Liu Bei and his brothers were kept waiting while the scholar slept, but finally got to talk to him.  They found him to be a tall man 'with a face like gleaming jade and a plaited silken band around his head.  Cloaked in crane down, he had the buoyant air of a spiritual transcendent.'

This story is as well known in Japan and Korea as it is is in China, as can be seen by two more Japanese images of Liu Bei's journey.  The woodblock print above is by Utagawa Kuniyoshi, from a series called A Popular Romance of the Three Kingdoms.  The one below is by the last great master of the ukiyo-e print, Tsukioka Yoshitoshi ('Gentoku' and 'Kômei' are the Japanese versions of  Liu Bei and Zhuge Liang).  The Fitzwilliam curators note that Kongming is shown by Yoshitosi 'on the right poring over learned texts: in the absence of lamps, diligent scholars in ancient China were supposed to have read by the light of fireflies or by the reflected luminescence of snow, which they brought in from outside.'

I will end this post with some lines from the novel itself, in Moss Roberts' translation.  On their first journey, Liu Bei and his brothers are directed to Sleeping Dragon Ridge:


'The twisting, turning ridge bears heavy clouds;
The frothing, churning stream is liquid jade.
Caught between the rocks, this dragon winds;
Shadowed by the pines, this phoenix hides.
A wattle gate half-screens a thatched retreat:
Undisturbed the recluse sits within.'

On their second journey, 'dense, somber clouds covered the sky.  The brothers rode into a cutting northern wind.  A heavy snow made the mountains gleam like arrowheads of white jade and gave the wood a silvery sheen.'  After being disappointed again, Liu Bei sets off back.


'Pear-petal flakes descending from the skies,
Antic willow puffs darting at his eyes,
He turns and halts to view the scene behind:
Banked with snow, the silvered ridges shine.'

On the third visit, he finally gains admittance and talks to Zhuge Yiang, who describes to him a three stage plan to reunite the Han empire.  Liu Bei rises from his mat and joins his hands together in gratitude, saying 'Master, you have opened the thicket that barred my view and have made me feel as if clouds and mist have parted and I have gained the blue sky.'
Posted by Plinius at 7:05 am