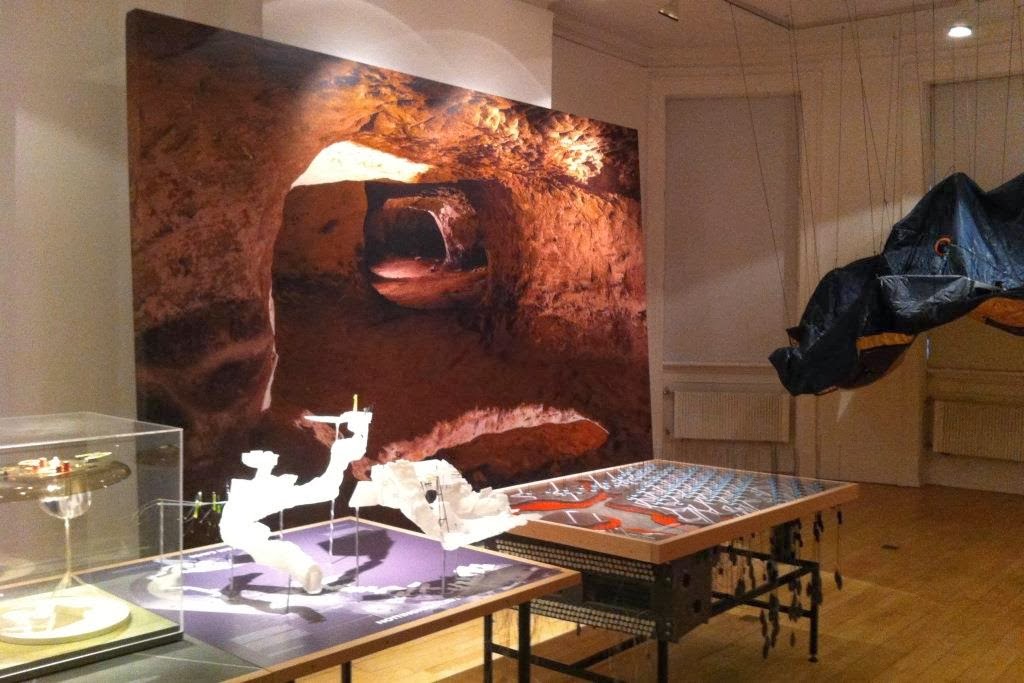 Last week I visited the Architectural Association Gallery in London, where there is an exhibition devoted to the British Exploratory Land Archive, a collaboration between architects Mark Smout & Laura Allen (Smout Allen) and Geoff Manaugh of BLDGBLOG.  You probably all know BLDGBLOG, but in case not, my earlier post 'Landscape Futures' included a few of its ideas, taken from The BLDGBLOG Book.  One of these, I now see, was that Rachel Whiteread should begin filling whole cave systems with plaster to create monumental sculptures.  This exhibition gives an idea of what that might look like, in the shape of a 3D-printed rendering of the Nottingham Cave systems.  These tunnels in the 'frozen Sahara' beneath the city were explored in a long BLDGBLOG post last year.  The exhibit's white plastic gives their warm desert sandstone the appearance of ice.  The model reveals a hidden structure to the caves which, I imagine, would be difficult to describe even by someone familiar with their twisting underground passages. 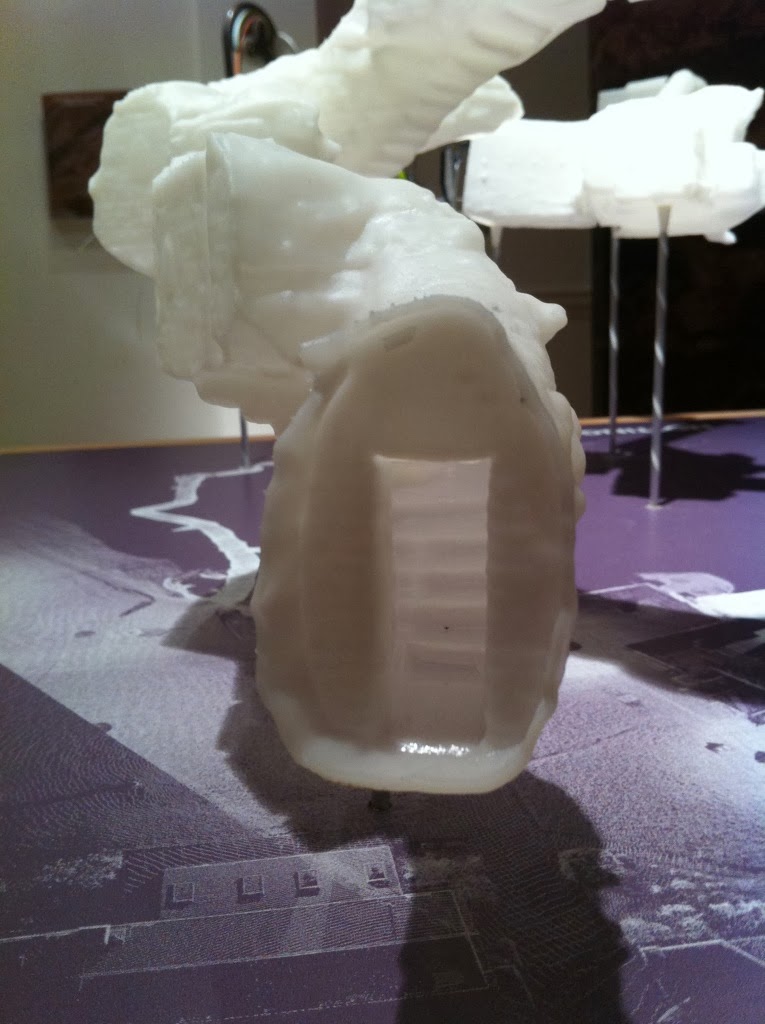 BELA call this work 'a Speleological Pantograph for the aboveground reproduction of subterranean spaces, objects and volumes. Although functioning very much like a traditional pantograph, this device will instead act three-dimensionally, connected to tools of volumetric analysis installed in underground spaces, such as caves, mines and basements, in order to reproduce those spaces on the Earth's surface.'  Imagining the reality of Nottingham's old sand mines from a pale plastic facsimile might seem as futile as trying to envisage a living snake on the basis of its discarded skin.  But the pantograph, in rescaling an object, always alters it (imagine how Rachel Whiteread's sculptures would fail if they were reduced in size).  The Tate, incidentally, have an etching, Head, by Eduardo Paolozzi in which he used a pantograph 'assembled wrongly to distort his original drawing by curving and elongating it.'  Presumably it would be possible to reprogram the Speleological Pantograph in order to create an uncanny transformation of some well-known underground space. 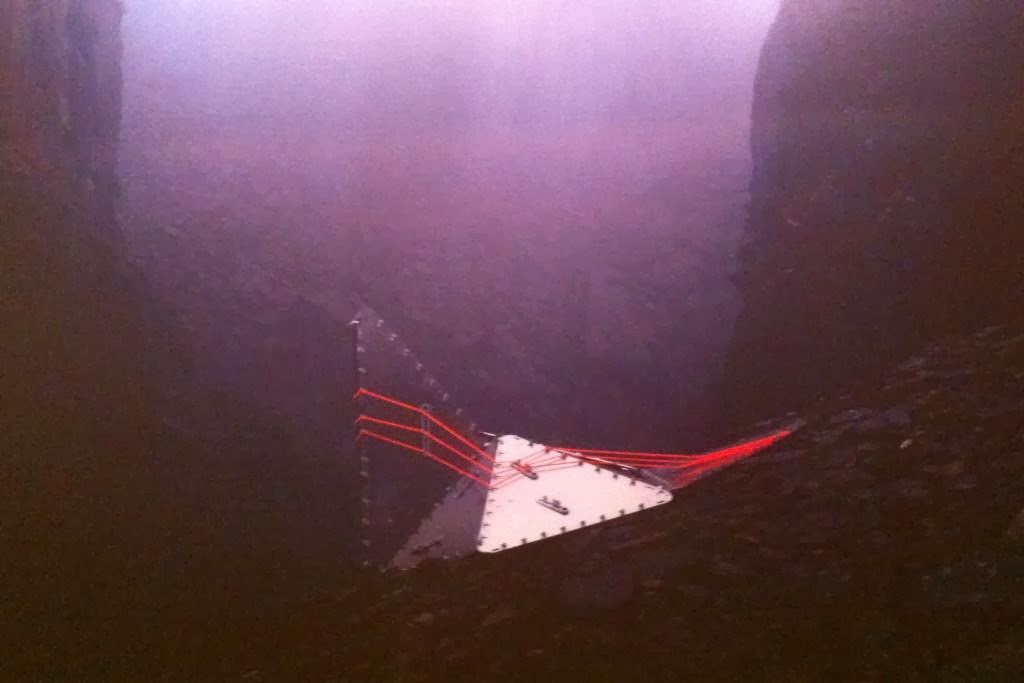 This photograph shows another speculative envirographic instrument being tested in the slate spoil heaps of North Wales.  It is a 'Clinometer', which 'combines 2D and 3D graphic mapping languages into a faceted 3D form composed of nine triangular aluminium sheets, upon which hanging weights are fixed. The device can be assembled in numerous configurations, using a bungee cord laced across the face of the sheets through eyelets along their edges and lever arms attached to the weights.' How would this actually work, I wondered, looking at the stack of metal triangles on the floor of the gallery.  This might simply reveal my ignorance of survey techniques, or it may be entirely missing the point, like asking how Tarkovsky's Stalker navigates the Zone by throwing bolts.  Looking at the photograph above, the Clinometer seems to operate through some metonymic principle, unfolding itself to resemble a fragment of the landscape.  And you can imagine its aluminium surfaces reflecting the surrounding spoil heaps, like the zig-zag mirror piece Robert Smithson made in 1969 at an abandoned open-cast mine further south at Tredegar. 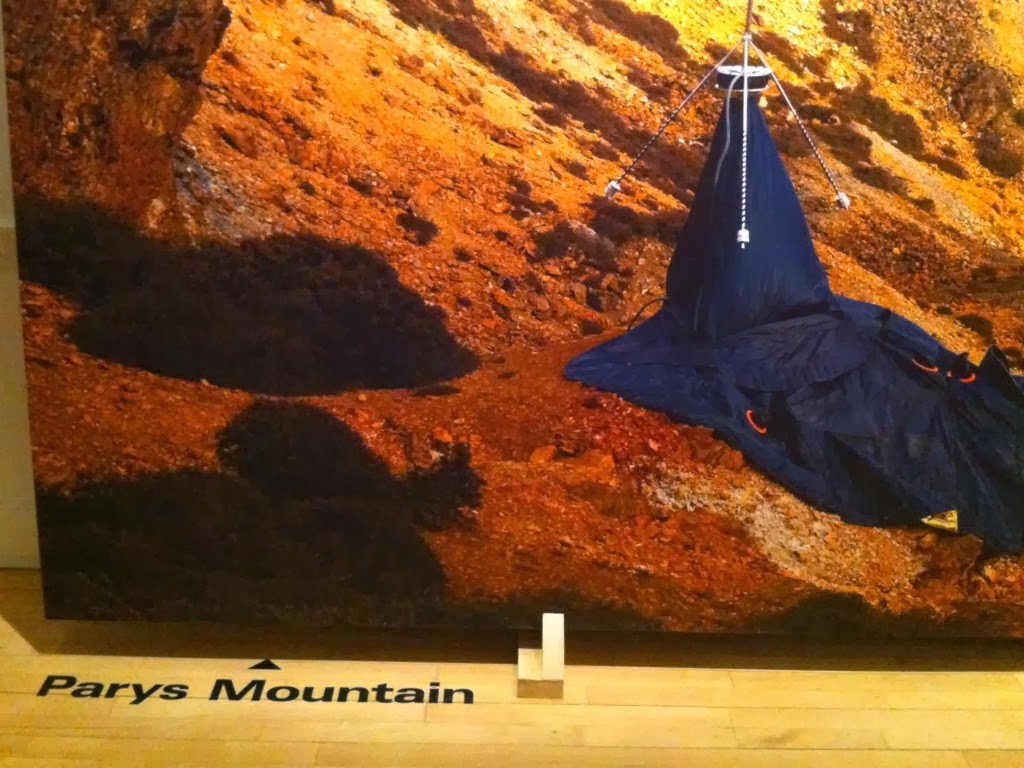 The exhibition includes photographs of other instruments in situ.  A Capture Blanket for soil-remediation on the side of Parys Mountain resembles the spent parachute of a planetary probe.  A Sniffer for aerosol sampling in a field of corn gave me the idea for an anti-hayfever device (yes, I write as a sufferer...)  However, BELA are also thinking about installing instruments on a larger scale where they 'become indistinguishable from landscapes'.  The Flywheel Reservoir (below), designed for Isle of Sheppey in the Thames Estuary, would be 'a constellation of architectural features, geological augmentations and topographic ornaments that 'harvests' and smooths the fluctuating electrical supply' generated by the London Array, the world's largest offshore wind farm.  The model resembles Walter De Maria's Lightning Field.  'Power levels and flywheel capacity is displayed in an elevated point cloud of laser light that ebbs and flows in the air like a mist over the landscape.' 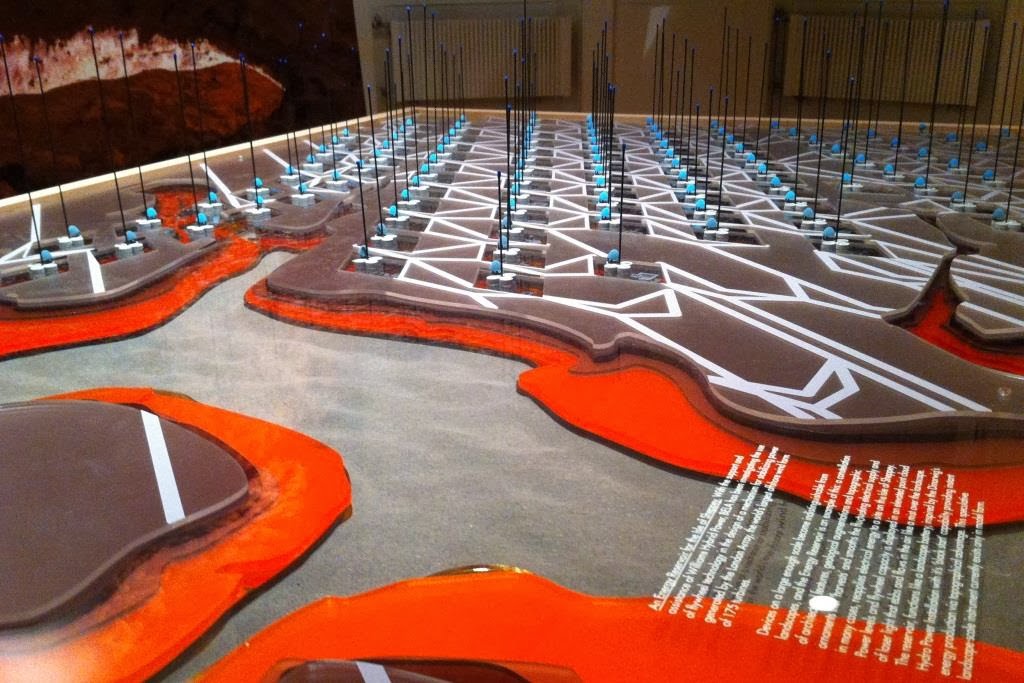 It was mist over the Isle of Sheppey that reduced visibility and caused a 130 vehicle pile up recently on its new road bridge (sixty people were injured but none killed).  Thinking of this makes me wonder how safe a vast landscape battery under the island would be.  BELA worked on the design with Williams Hybrid Power whose flywheel technology was developed for Williams Formula 1 cars.  The island in their architectural model resembles a circuit board and beneath the table (under the bonnet, as it were) wires dangle, waiting to be connected.  What kind of subterranean architecture would be needed to keep the 'garden of flywheels' going?  Perhaps like the old slate and sand mines this site too would eventually be abandoned, left for exploration by future architects and then taken as inspiration for a new cycle of landscape speculations.
Posted by Plinius at 10:14 pm