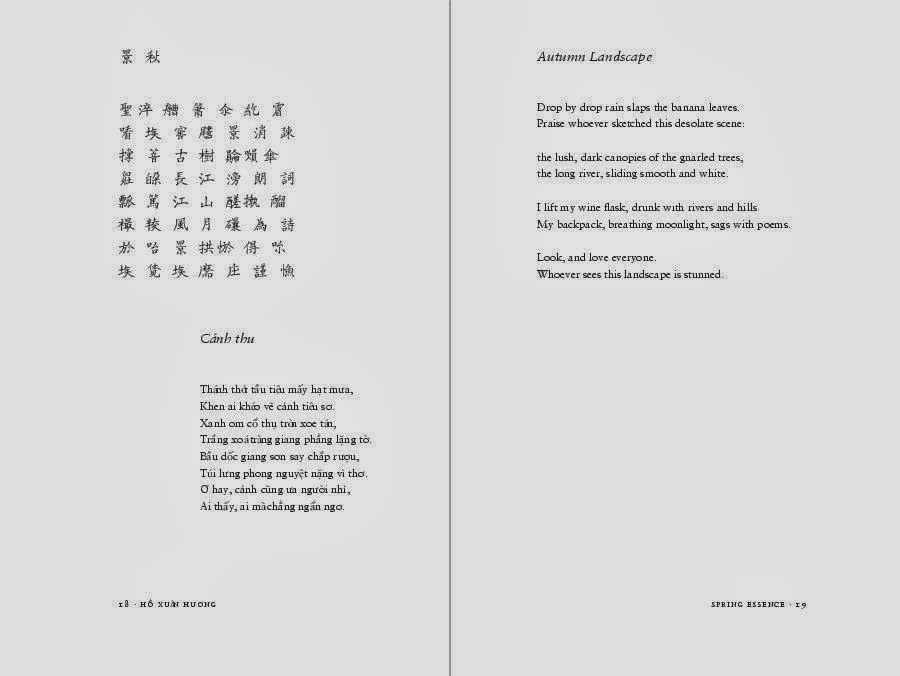 When the Copper Canyon Press published Spring Essence: The Poetry of Hồ Xuân Hương, the New York Times discussed it in its Technology section.  'A nearly extinct ideographic script known as Nôm, similar to Chinese but representing Vietnamese, was painstakingly put into a computer program, and thus did the works of Hồ arrive in Western bookstores. Considered one of Vietnam's greatest poets, Hồ was born in the late 1700's and wrote with unusual irreverence and shockingly erotic undertones for her time.  Hồ's work really ''jumped from woodcut to digitization, skipping the whole Gutenberg process,'' said John Balaban, the North Carolina poet who translated her folk poems and helped oversee their presentation in the strikingly designed book. Each poem is presented in three versions, across facing pages: in the original Nôm, in modern romanized Vietnamese, and in English.'  One of these is shown above; another translation is reprinted in full at the Smith College Poetry Center site, so hopefully it is OK to include it here:

A cliff face. Another. And still a third.
Who was so skilled to carve this craggy scene:

A twisting pine bough plunges in the wind,
showering a willow’s leaves with glistening drops.

Gentlemen, lords, who could refuse, though weary
and shaky in his knees, to mount once more?

At first site this is a simple landscape poem but as the New York Times notes, Hồ's poems tend to have 'shockingly erotic undertones'.  This is partly facilitated by the tonal nature of Vietnamese - words can take on second meanings depending merely on the pitch of each syllable.  In John Balaban's notes to accompany 'Three-Mountain Pass', he says that Maurice Durand, a French-Vietnamese scholar whose edition of  Hồ's poems remained incomplete at his death in 1966, thought that the poem probably describes the Đèo Tam Điệp mountains, 'but, he adds innocently, "l'on n'a pas de grotte avec une grande ouverture."  While an actual landscape may have suggested this poem ... the particular contours, the active pine and willow constitute a sexual landscape as well. Pines traditionally stand for men; willows for women.'  'Three-Mountain Pass' is about the compulsion to explore both the landscape and the body - perhaps, it suggests, the differences are no more than a matter of tone.
Posted by Plinius at 9:02 am