Landscape with the Rape of Europa 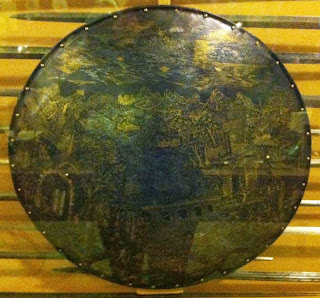 The Wallace Collection has several fine pageant shields with dramatic mythological scenes, but this one is unusual: its dark steel surface is inlaid with a classical landscape.  You might just be able to make out Europa and the Bull at the bottom of the shield, but they are not the focal point: instead the eye is drawn to buildings and bridge, woods and mountains, clouds and birds.  The action is overshadowed by its setting, and by a pervading darkness that gives this picture the appearance of a night scene (dramatic nocturnal light effects were being used by artists like Tintoretto at about this time).  The collection's inventory notes that this composition is 'curiously but accidentally reminiscent of the Chinese willow-pattern.'  The story of the Chinese lovers turned into a pair of doves has the structure of one of Ovid's tales, although in the story on this shield Europa is herself the victim of a metamorphosis and is taken by Zeus, disguised as a bull, over the sea to Crete.

The elaborate decoration of pageant shields inevitably brings to mind the Shield of Achilles, described in detail by Homer in classical literature's most famous example of ekphrasis.  The shield, wrought by Vulcan, seems to contain the whole world, from the ocean and the heavens: cities at peace and war, a wedding, a trial, people working the fields and enjoying the wine harvest.  Here, in Pope's translation, is a glimpse of landscape: 'Next this, the eye the art of Vulcan leads / Deep through fair forests, and a length of meads, / And stalls, and folds, and scatter'd cots between; / And fleecy flocks, that whiten all the scene.'  W. H. Auden wrote a poem called 'The Shield of Achilles' which contrasts the Sublime imagery of Homer with a featureless modern landscape of weeds, barbed wire and bored officials.  Here is the opening verse:


She looked over his shoulder
For vines and olive trees,
Marble well-governed cities
And ships upon untamed seas,
But there on the shining metal
His hands had put instead
An artificial wilderness
And a sky like lead.

The Academy of American Poets site has a little introduction to ekphrasis which concludes with lines from another Auden poem, 'Musée des Beaux Arts', and William Carlos Williams' equally well known 'Landscape with the Fall of Icarus', both of which describe Bruegel's painting (below).  Here, as in the Wallace Collection's shield, myth is reduced to a detail.  Icarus and his father Daedalus fly from the palace where they had been imprisoned by Europa's son, King Minos.  And then, as Williams puts it: 'unsignificantly /  off the coast / there was a splash / quite unnoticed / this was / Icarus drowning'.  Bruegel's landscape glittering in the fatal spring sunshine, where 'the whole pageantry / of the year was / awake tingling', distracts us from the fate of Icarus.  It is interesting that Williams uses the word 'pageantry' here; what, you wonder, was happening unnoticed as those sixteenth century nobleman processed in their elaborate armour and the sunlight flashed off a damascened shield and its landscape with the Rape of Europa? 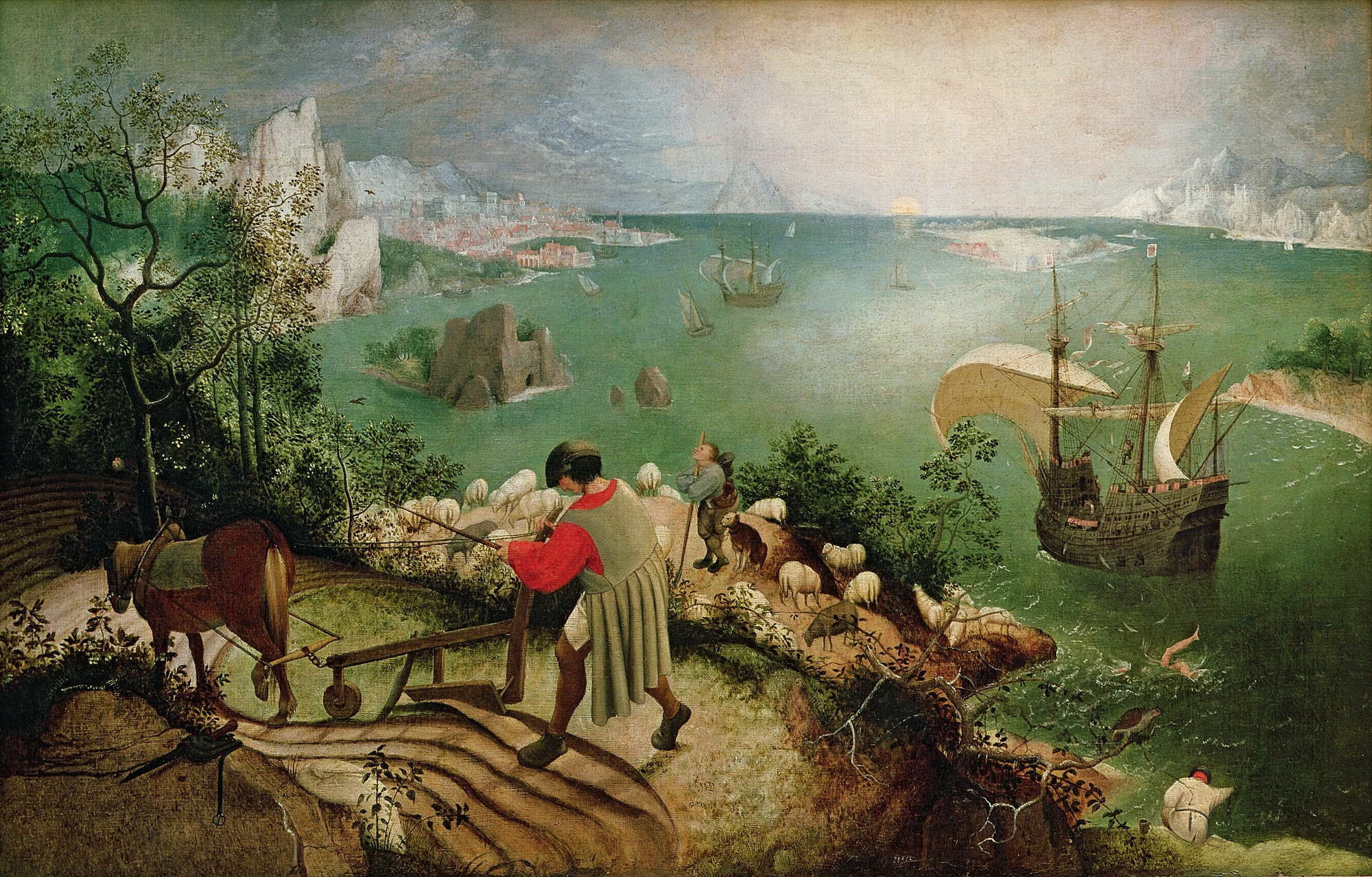 Pieter Bruegel the Elder, Landscape with the Fall of Icarus, 1560s
Posted by Plinius at 12:27 pm