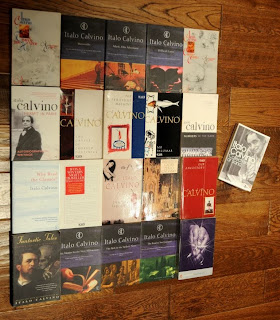 I don't know why it has taken twenty-nine years for Italo Calvino's Collezione di sabbia to appear in English but now it can be enjoyed here in Martin McLaughlin's new translation.  In his introduction, McLaughlin notes Calvino's fondness for mineral imagery: the 'stone' of his earlier collection of essays on politics and literature, Una pietra sopra, has become fragmented into granules of sand in this subsequent volume - short articles on art works and unusual books that captured Calvino's interest, along with travel sketches written after visits to Japan, Mexico and Iran.  Several essays describe different forms of stone, from the raked gravel gardens of Kyoto to the sculpted rocks of Persepolis.  One even mentions George Sand, who aside from her novels painted what she called 'dendrites', landscapes whose textures resemble 'those stones which exhibit a faint pattern of branching, multicoloured veins.'  Calvino finds rock sculpted to imitate natural forms (the overgrown temples of Mexico, the frieze of Trajan column) and writes about trees themselves, painted and real.  McLoughlin highlights this 'luxuriant arboreal theme', perhaps unsurprising in a book from the author of The Baron in the Trees. 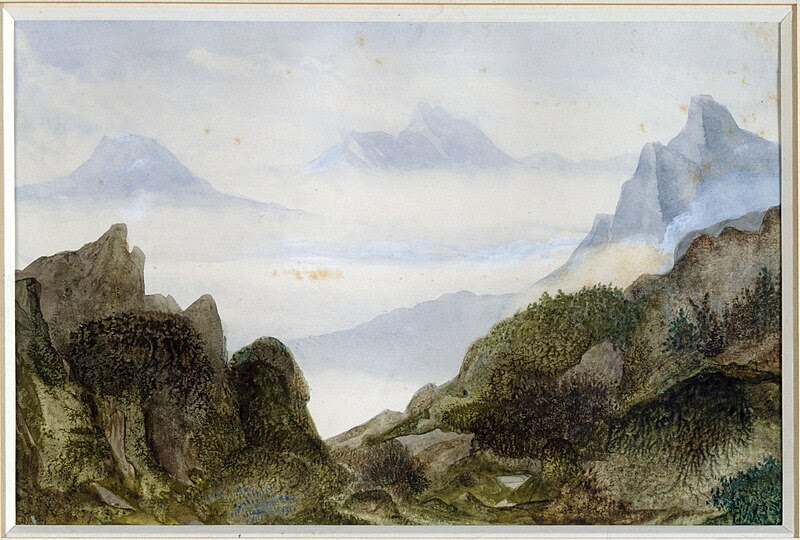 This book's title essay was written after Calvino had been to see an exhibition in Paris devoted to the art of collecting.  Among the bizarre collections there was a set of jars containing nothing but sand, each a sample from a different location, carefully labelled.  Calvino describes becoming absorbed in their minute differences, although at first he 'takes in only the samples that stand out most, the rust coloured sand from a dry river-bed in Morocco, the carboniferous black and white grains from the Aran Islands...'  Reading this reminded me of helping my children make sculptures in these grey Aran Island sands, earlier this year.  However, Calvino wonders whether it is possible for containers of sand to retain traces of lived experience: the sight of an indigo sea, the heat of the wadi, the sensations of the beach.  Were these jars nothing more than a sad 'cemetery of landscapes reduced to a desert'?  And yet perhaps they provided a means of allowing the collector to remove herself from 'the confused wind of being, and to have at last for herself the sandy substance of all things, to touch the flinty structure of existence.' 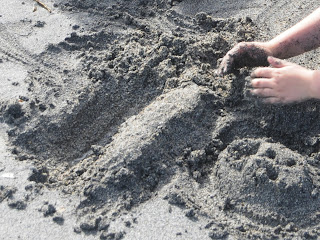 Calvino's short sequence of essays on Japan were particularly interesting for me and I only wish there were enough for a whole book, along the lines of Barthes' Empire of Signs.  They touch on the emptiness of old wooden temples, the solitude of pachinko parlours and the way the white sand of Kyoto's Silver Pavilion seems to retain the light of the moon.  In 'The Obverse of the Sublime', Calvino has a 'haiku moment', watching a flock of birds landing on a single bare tree, isolated among the red, yellow and rust colours of autumn.  But the Japanese poet accompanying him seems unconvinced: 'a sure sign that haikus are composed in a different way.  Or that it makes no sense to expect a landscape to dictate poems to you, because a poem is made of ideas and words and syllables, whereas a landscape is composed of leaves and colours and light.' 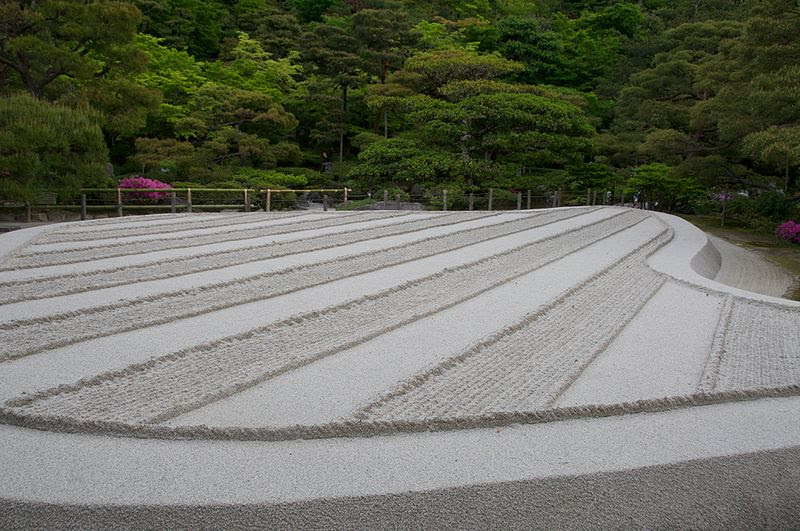 Sand garden at Ginkaku-Ji, the Temple of the Silver Pavilion
Source: Wikimedia Commons

'The Thousand Gardens' describes the experience of walking a path through the garden of the imperial villa at Katsura, where each footstep is designed to reveal a new landscape.  These conveniently placed stones are 'a device for multiplying the garden, but also for removing it from the vertigo of the infinite.'  The path takes Calvino to a tea house where there are only mats on the floor and a few carefully placed objects: 'it is by limiting the the number of things around us that one prepares oneself for accepting the idea of a world that is infinitely larger than ours.'  He concludes with a story about the great tea master Sen-no Rikyu, who deliberately obscured a view of the sea with hedges so that the visitor could only see it when they bent down to take water from a pond.


'Rikyu's idea was probably this: bending down over the pond and seeing his own image shrunk in that narrow stretch of water, the man would consider his own smallness; then as soon as he raised his face to drink from his hand he would be dazzled by the immensity of the sea and would become aware that he was part of an infinite universe.  But these are things that are ruined if you try to explain them too much.  To the person who asked him about why he had built the hedge, Rikyu would simply quote the lines of the poet Sogi: 'Here, just some water, / There amidst the trees / The sea!''

I might have mentioned that Calvino doesn't name his sand collector, not deeming her identity important. Sand collecting has its own websites of course: see for example the World Atlas of Sands. Arenophiles will be heading to the 2013 SandFest in Cartersville, Georgia later this month.