The Library of the Forest

In 1980 Miguel Angel Blanco retired to the woods of the Fuenfría Valley, in the Guadarrama Mountains outside Madrid.  One winter's day, returning from a long walk, he decided to place the objects he had found in the snow into a small glass-lidded box and bound it together with pages to create a book-box, the first in what was to become an ever-expanding library of the forest.  Each book is the indexical trace of a walk, using 'ink-sprinklings, positive or negative imprints of the materials used in the box, fire lines, water marks or different engraving techniques.'  The box itself, he writes, 'is a small recondite sanctuary, a sancta sanctorum. Sealed with glass, hermetic, to preserve its contents, it is at the same time ark, essence-container, shrine and crucible. Moss, lichen, barks, needles, pine cones, pollen, brambles, fungi, wax, roots, earth, minerals or resins are some of the materials I have collected. Materials that liberate secret images. Unfathomable abysses, deep lakes, infinite spaces, storms, creeks, fires... may open inside a small box ... The Library is a pine grove, where the variable scale of the trees is reflected in the different formats of the books.' 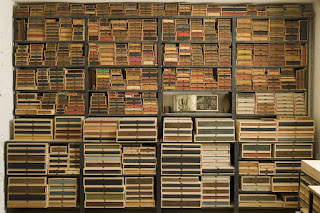 In The Old Ways, Robert Macfarlane describes a visit to the artist and his library, which now covers the ground floor and basement of an apartment building in Madrid.  Blanco and his wife talk quietly, watching while he browses through this archive of landscape and memory: 'they had seen the magic of the library work on people before.  The last box I looked at was entitled Luz Eterna, 'Eternal Light'.  It was arrestingly beautiful.  The inside of the book was covered in gold leaf, over which had been poured a layer of pine resin, tapped from a Guadarraman pine and honeyish in lustre.'  The box seems to brighten the dim room - closing the book feels like turning off a light.  The next day Macfarlane sets out with Blanco to walk through the pine woods towards the mountains.  On an old Roman road, they pass 'among granite boulders fleeced with green and grey moss that was as soft to the touch as jewellery-box velvet.'  The monks in the nearby monasteries used this moss for pillows, 'to draw away bad thoughts from the mind.'  Eventually they part company, but not before finding a strange feather on the path (from an azure-winged magpie): '"Caminar es atesorar!"', says Blanco: '"To walk is to gather treasure!"'

Miguel Angel Blanco is one of several walking companions who accompany Robert Macfarlane on The Old Ways (another is Raja Shehadeh, whose writing I have described here before).  But many of the book's most beautiful passages describe moments of solitude: striking out for the high pass over the Guadarrama, he is 'glad to have had Miguel's company but glad also now to be alone in the forest'. From a clearing he watches a black vulture, its shadow gliding over the treetops, and after resting at the pass he climbs on, up a zig-zag path towards the first of the Siete Picos (Seven Peaks).  To the north he can see ochre plains stretching away and the distant city of Segovia seemingly floating above the heat haze.  The white quartz mountain-top paths eventually lead him to a sleeping place in a natural cave.  'When dusk came I lit my candles, and my shadows flickered of the rock interior.  The night: a milk-white half moon, cool air. Owls in the forests below, their hoots pushing through the dusk.  The light soughing of wind in the pines.  Sound drifting, two shooting stars.  Dawn was dewless and dry.  When the sun came it was a storm of gold, rich on the face, Miguels' luz eterna pouring through the air.  I ate apples, bread and cheese, and watched the light flood the land.  Where it reached the dark pines across the valley they appeared to shake.  I felt uncomplicatedly happy to be in that place and at that time.'
Posted by Plinius at 10:01 pm

Ch 11, pg . 238 tells of this library so I went on line for further details and a photo. Oh, how I wish I could be there. A dear friend will be in Madrid in a month or so. Is Blanco's library open to visitors?

I'm not sure - it certainly sounds wonderful. I suggest you contact him: http://www.bibliotecadelbosque.net/contacto/

Macfarlane's book left an indelible impression on me. When I try to describe to people, my words are woefully inadequate.