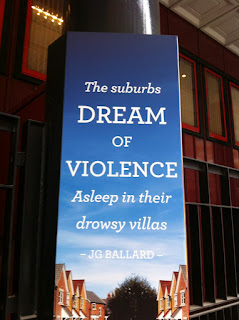 This J. G. Ballard poster can be seen outside the British Library, advertising the exhibition Writing Britain: Wastelands to Wonderlands, which 'examines how the landscapes of Britain permeate great literary works.'  It is quite an ambitious aim and you'll have no trouble spotting omissions in the list of exhibits, including people I've written about here (The Anathemata by David Jones, for example). There is an understandable emphasis on the visual - so a whole case is devoted to Remains of Elmet and there is no place for, say, Charles Tomlinson's Stoke poems or Roy Fisher's City.  The writers are mostly British, so we don't get Sebald on Suffolk, and the language is almost always English, although one notable exception is a reading of Edwin Morgan's 'The Loch Ness Monster's Song' (my five-year-old son's favourite exhibit).  'Britain' is taken to extend as far as the Ireland of Yeats, Joyce and Heaney but there is quite a large focus on the city and suburbs of London, the River Thames and the M25.  Perhaps this reflects the 'London 2012' tie-in and the site of the exhibition.  I was puzzled by the inclusion of Harry Potter and the Philosopher's Stone among these 'great literary works' permeated by the British landscape, but it may have something to do with the fact that the British Library is next door to the refurbished Kings Cross Station, with its newly sited mock-up of Platform 9 ¾.

As with earlier British Library exhibitions, the main pleasures are to be had from simply looking at books as objects - from fine art editions like Auden Poems, Moore Lithographs, to well-remembered paperbacks (Susan Cooper and Alan Garner) - and seeing original manuscripts like the 14th century copy of Sir Gawain and the Green Knight, or a poignant letter from John Clare asking for help from the Royal Literary Fund, or the heavily annotated typescript of J. G. Ballard's Crash.  There may be time to say more in later posts here about some of the specific exhibits - one listed simply as 'Robert Southey poem', for example, is much more interesting than it sounds. The texts are complemented by readings and sound clips: in addition to the Loch Ness Monster you can hear Ballard on Crash (it was not easy convincing my son he wouldn't want to listen to this exciting-sounding book).  There is also Ezra Pound performing his translation of The Seafarer, which John Woolrich wrote amusingly about some years ago: an attempt to fuse poetry with the sound of kettle drums, 'it would have been "magnificent", someone said, "with a rehearsal."'  Several short videos were made to accompany Writing Britain and I have included three of these below.  In the first clip Simon Armitage says "if I had to choose one thing that characterised British literature - both prose and poetry - I would have to say it was geography and, more widely, I would say: landscape."