No trace of Cold Mountain 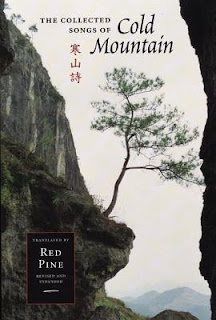 Cold Mountain, Red Pine, Copper Canyon.  The Copper Canyon Press publish a beautiful edition of  the complete poems of Cold Mountain (Han-shan) by Bill Porter, who translates Chinese literature under the name Red Pine. Nobody knows Han-shan's real name, but it is said that he called himself after the location of the cave which he made his home.  In his introduction Red Pine describes visiting this cave, 'located in Chekiang province at the base of Hanyen, or Cold Cliff, a two-day walk from the East China Sea ... Even now, Cold Mountain's old home attracts few visitors.  In May of 1989 and again in October 1991, Layman Fang of Kuoching Temple arranged for a motorized rickshaw to take me and two friends there.'  The road was poor and when they got there they found a roofless hut inside the cave, owned by an old farmer.  After sharing with them his lunch of noodles and red pepper paste, the farmer guided them around the area.  'In the centuries that followed Cold Mountain's disappearance, Buddhists built a monastery just beyond the base of the cliff.  It had since been replaced by terraced field of corns and peanuts but our host told us he still dug up the occasional temple tile.'

Red Pine's search reminded me of Gilbert Highet, seeking traces of Poets in a Landscape (1957): guided by the descriptions in Virgil, Pliny and Sextus Propertius, for example, he finds the Springs of Clitumnus still a source of 'cool copious fresh water, absolutely clean, rising out of dry earth under a hot sun' but is drawn back to the present when he notices 'in one of the fountain-beds, half a dozen Coca-Cola bottles set to cool for possible sale to tourists.'  Robert Macfarlane has just written an article about artistic pilgrimage, including his own attempt to follow W. G. Sebald (seemingly not yet abandoned when I did a post called The Printed Path in 2007).  In his new book The Old Ways, the guiding spirit is Edward Thomas, but he also travels in the footsteps of Eric Ravilious and Nan Shepherd.  Macfarlane's experience of the pine forests of the Siete Picos (described in my last post) reminded me of Richard Holmes on the trail of Robert Louis Stevenson in Footsteps (1985): 'I slept out that night under an outcrop of pines, facing east on a slight incline, with the light of the Costaros far way to my left. The turf was springy, and the pine needles seemed to discourage insects. As I lay in my bag, a number of late rooks came winging out of the gloaming, and settled in the pine branches, chuckling to each other. They gave me a sense of companionship, even security: nothing could move up through the trees below me without disturbing them. Once or twice I croaked up at them (it was the wine) and they croaked back: 'Tais-toi, tais-toi.' This night I fell asleep quickly. Only once, waking, I drank two ice-cold mouthfuls of water from my can and, leaning back, saw the Milky Way astonishingly bright through the pine tops, and felt something indescribable - like falling upwards into someone's arms.'

I seem to have become side-tracked...  'People ask the way to Cold Mountain,' Han-shan wrote, 'but roads don't reach Cold Mountain / in summer the ice doesn't melt / and the morning fog is too dense...'  In a footnote to this poem, Red Pine observes that a road does reach Cold Mountain, even though it is only wide enough for one cart and its condition is very variable, depending on the rain.  Furthermore, although the fog can drift inland from the nearby ocean in spring, 'ice and snow appear only briefly during the winter.  But then, this poem is about a different mountain.'  Han-shan's mountain poems are no more topographically specific than Petrarch's spiritual narrative, The Ascent of Mount Ventoux.   Petrarch descends after reading this passage in St. Augustine: 'And men go about admiring the high mountains and the mighty waves of the sea and the wide sweep of rivers and the sound of the ocean and the movement of the stars, but they themselves they abandon.'  Han-shan took the opposite path, abandoning himself to the landscape and remaining in the Tientai Mountains writing poems until one day, it is said, he disappeared into the rocks themselves, squeezing into a crevice which then closed around him.  Red Pine is shown this spot by the old farmer.  'Several vines led down from the spot, and we pulled ourselves up to a fine view of the hills to the south but no trace of Cold Mountain.'
Posted by Plinius at 4:25 pm