There may be unexpected dangers in the gentle art of plein air painting, as is evident in a letter Monet wrote to his future wife Alice Hoschedé from Etretat on the evening of November 27th 1885.  'I was hard at work beneath the cliff, well sheltered from the wind, in the spot which you visited with me; convinced that the tide was drawing out I took no notice of the waves which came and fell a few feet away from me.  In short, absorbed as I was, I didn't see a huge wave coming; it threw me against the cliff and I was tossed about in its wake along with my materials!  My immediate thought was that I was done for, as the water dragged me down, but in the end I managed to clamber out on all fours, but Lord, what a state I was in! My boots, my thick stockings and my coat were soaked through; the palette which I had kept a grip on had been knocked over my face and my beard was covered in blue, yellow etc.' 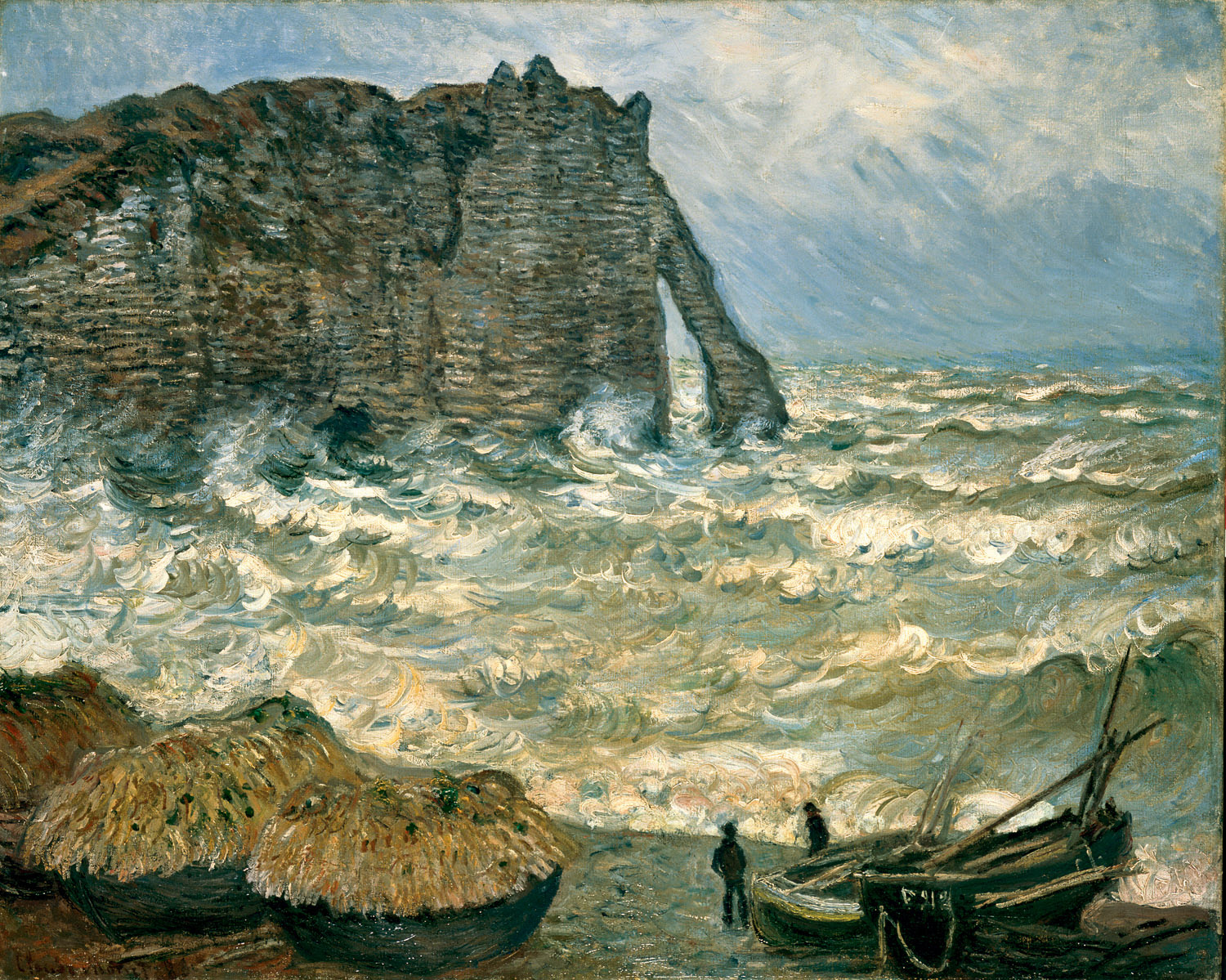 Claude Monet, Agitated Sea at Etretat, 1883
Four years later Monet was in central France, painting the Creuse river and writing to Alice from Fresselines about the 'damnable' spring weather (the translation here is, again, by Bridget Stevens Romer).  'It will be a gloomy series.  A few have some sunlight in them but they were started so long ago that I'm very much afraid that when the sun finally re-emerges I shall find my effects considerably altered.'  It was changes in the weather that really frustrated his efforts.  'The weather's wearing me down, a terrible cold wind which wouldn't have bothered me in the slightest if I'd captured my effect, but the endless succession of clouds and sunny intervals couldn't be worse, especially when I'm getting to the end; but the thing that is upsetting me the most is that with the drought the Creuse is shrinking visibly and its colour is altering so radically that everything around it is transformed.' 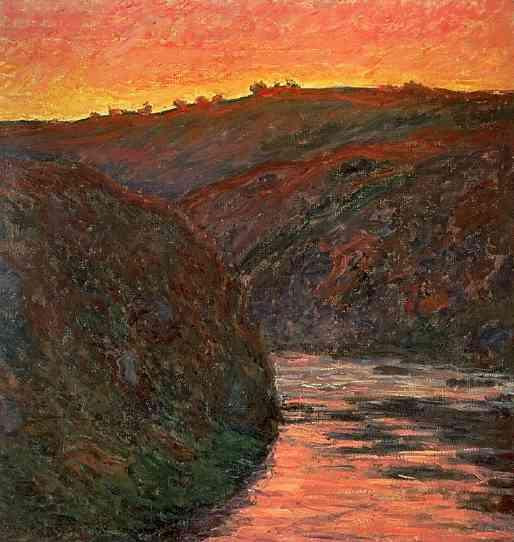 Claude Monet, Valley of the Creuse at Sunset, 1889
You would think an artist averse to fluctuations in the weather might stay clear of England but in March 1900 he was here, complaining to Alice of the effects of the fog. 'I've never seen such changeable conditions and I had over 15 canvases under way, going from one to the other and back again, and it was never quite right; a few unfortunate brushstrokes and in the end I lost my nerve and in a temper I packed everything away in crates with no desire to look out of the window...'  This blog post is being written on a cold and misty morning, with the weather forecasters promising a very British day of rain showers for the Queen's Diamond Jubilee Pageant on the Thames.  Monet himself witnessed a royal spectacle whilst in London - the funeral procession for Victoria - and pronounced it superb: a 'feast of gold and colour'.  He was still in a good mood the following day as the sun rose dazzling over the river and the joys of impressionism seemed to outweigh its frustrations.  'I can't begin to describe a day as wonderful as this.  One marvel after another, each lasting less than five minutes, it was enough to drive one mad.  No country could be more extraordinary for a painter.' 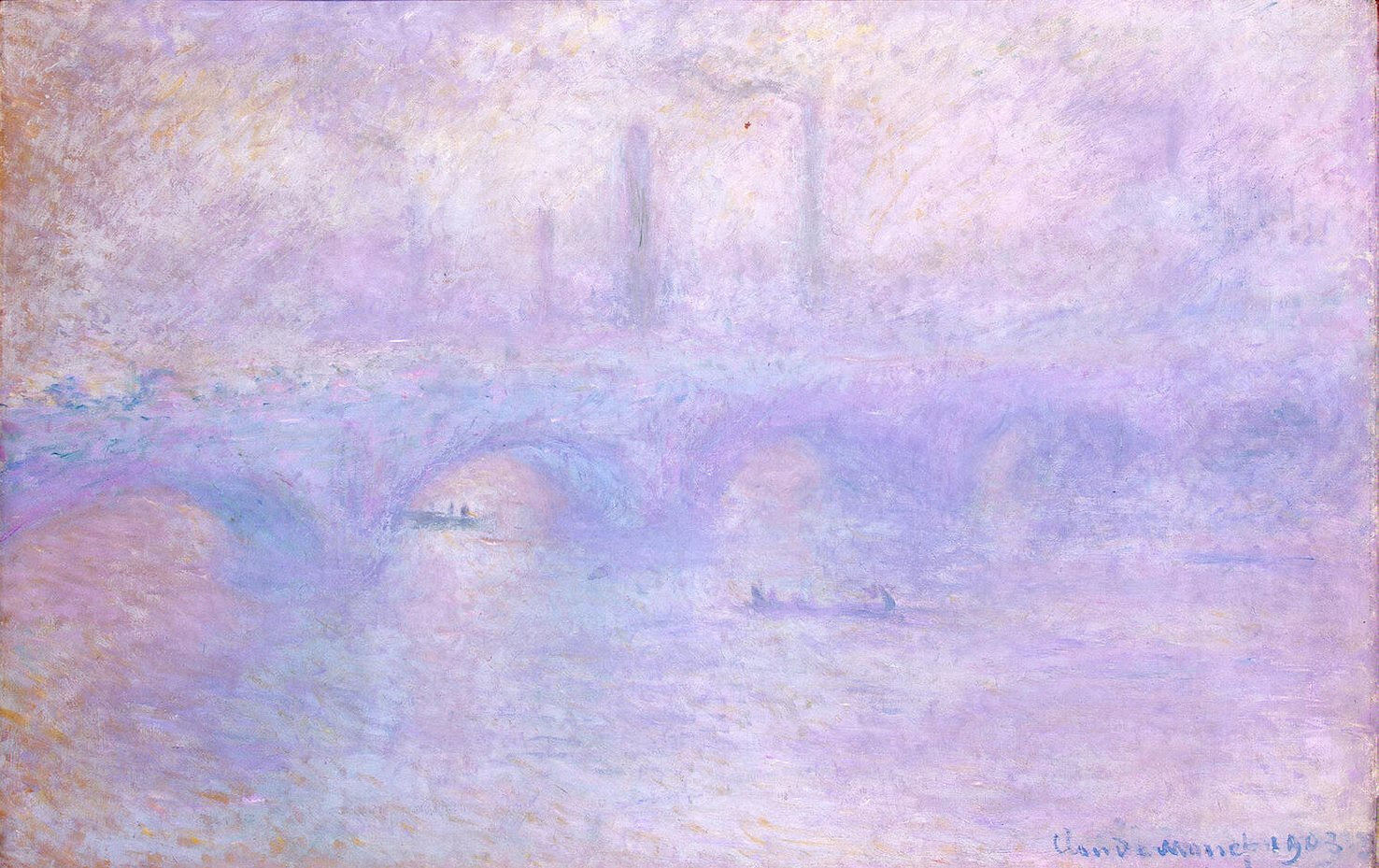 Can you see a connection between Claude Monet's Agitated Sea at Etretat, 1883 and JMW Turner's Waves Breaking on a Lee Shore at Margate c1840? Different countries and different decades, but not totally dissimilar.

thanks for the link
Hels
http://melbourneblogger.blogspot.com.au/2012/06/how-close-were-claude-lorraine-and-jmw.html