Werner Herzog has been invited to exhibit at the Whitney Biennial this year and, as you can see from the short interview above, he will be mounting an installation devoted to a landscape painter whom 'nobody knows': Hercules Segers.  In 1678 Samuel van Hoogstraten, writing forty years or so after the death of Segers, characterised him as an artist unrecognised by his contemporaries. 'According to him Segers's despair over his failure to achieve success drove him to drink and he died after falling downstairs while drunk' (Seymour Slive, Dutch Painting, 1600-1800).  But Segers did achieve some degree of fame in his day - one of his works was offered to the King of Denmark for example - and Rembrandt owned eight of his paintings.  There is an etching by Rembrandt of the Flight into Egypt (c1653) which he made by scraping away the figures of Tobias and the Angel and keeping the poetic landscape in a plate Segers had made (Segers himself had copied an engraving by Hendrick Goudt which was in turn based on an original painting by Adam Elsheimer...)  Nevertheless, according to Slive, few Dutch painters who came after Segers 'explored the haunting world he discovered, and only Rembrandt and Jacob van Ruisdael evoke moods similar to his.' 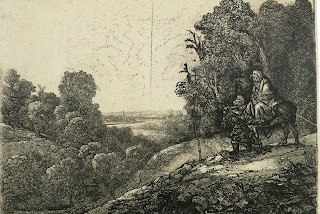 Paintings by Hercules Segers (note that his name is often spelt Seghers) are rare.  Only about a dozen were known and one imaginary landscape thought by some to be by him was destroyed in a fire five years ago.  His prints are more numerous and include intriguing studies of a skull and a pile of books.  Characteristic features of his landscape etchings, according to Slive, are 'lonely, lunar-like rocks and decayed pine trees.  His vigorous and somewhat grainy line is well suited to suggest weather-worn surfaces of rocks and ruins.  A crumbling edifice which reminds viewers of the transitory nature of their life and accomplishments was one of his favourite motifs.'   According to Hoogstraten, Segers 'printed paintings' and this is evident, for example, in the landscape below, where Segers pulled the sheet of paper through the printing press with a piece of cloth to giving it the feel of a painting on canvas.  He would create a set of radically different impressions from the same plate using different inks and unusual effects, cropping his prints like a modern photographer. Werner Herzog's installation, Hearsay of the Soul, will feature twenty of these etchings, projected to the accompaniment of music by Ernst Reijseger (who composed the soundtrack for Cave of Forgotten Dreams).