A View of the Untersberg

In an earlier post I considered two examples of visual poetry in which words are placed on the page to convey the impression of a landscape: Guillaume Apollinaire's 'Paysage' (1918) and Guillermo de Torre's 'Paisaje Plastico' (1919).  These Modernist experiments are one source for the many kinds of visual poetry that have emerged since the 1950s, but another much older tradition is the shaped poem, whose most famous English exponent was George Herbert ('Easter Wings').  Montaigne was not a fan of this kind of thing - poems in 'the shapes of eggs, globes, wings, and hatchets' feature in his essay 'On Vain Subtleties'.  But the fact that 'shaped poems have usually been considered clever, fussy tricks at best' did not deter the American poet John Hollander from publishing a whole collection of them, Types of Shape (1969, expanded 1991).  To produce poems that would be more than just momentarily amusing, Hollander aimed to translate his objects into striking typographical silhouettes whilst ensuring that the poem would work as a poem even if the shape were destroyed and the lines printed all flush to the left.  The example below (and I hope my photo is sufficiently grainy to avoid copyright issues) is called 'A view of the Untersberg'. 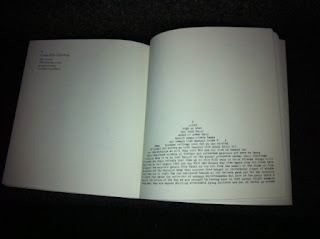 The poem's subtitle provides a more precise location and places it in the sub-genre of window view poems: 'Elev. 6,000 ft., SW of Salzberg, as seen through a window in Schloß Leopoldskron.'  I can't help recalling that the one time I went to Salzberg it rained all week and the view from the window would have been adequately represented by Apollinaire's visual poem 'Il Pleut'.  Hollander was obviously luckier with the weather and he provides an accurate description of the mountain's shape (see for example, the image here).  It is possible to imagine a far larger visual poem that would imitate not just the outline but also the structure of the mountain, with spaces for its patches of snow, or an even more ambitious poem in which every path and tree would be discernible...   'A View of the Untersberg' starts at the summit (with a reference to the etymology of 'Untersberg'): 'I / stand / high on what / was once Odins / mound of power...'  And it ends with the poet back down on the plain 'at the bottom of the day', haunted by mountain ghosts and feeling 'changed by having been on that unreal height'.