Toshio Hosokawa's new opera Matsukaze, based on a Noh play by Zeami, has received a lot of praise this year.  The New York Times review explains that it begins with some field recordings: 'the tranquil sound of waves washing up on a beach, which he recorded off the coast near Tokyo in January. Two months later, when the cast assembled in Berlin to begin preparing for the opera’s premiere in Brussels, the waves had acquired an entirely different significance. “We heard those water and wind sounds, and we remembered at once the tsunami...”' 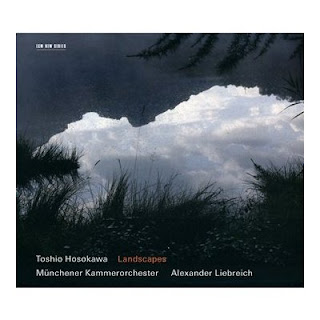 Last month ECM issued a new set of Hosokawa recordings, Landscapes.  Despite the title this only includes one of his early 90s 'Landscape' chamber pieces (some of which are currently viewable on Youtube - see below).  It features a new expanded version of  'Landscape V' for shô and string orchestra; the other tracks are 'Sakura für Otto Tomek', 'Cloud and Light', and 'Ceremonial Dance'.  The Independent's Andy Gill pronounces the album 'exquisite' but The Guardian's Andrew Clements thinks it 'exquisite in a self-conscious way ... for a few minutes the effect is entrancing, but after that it begins to pall'.  In his liner notes Paul Griffiths says 'The interplay of shô and strings, and in particular their mutual imitation, is the driving force – or perhaps one should say ‘drifting force’, given that the music carries itself so lightly ...  its effect is of observing clouds in a largely peaceful sky, clouds that are mostly white but occasionally show shadows and briefly stir into more turbulent action.”

It is such a pleasure to come across a blog written by a kindred spirit. I am not an artist but love the neo-romantics, am British-Canadian.

I was searching for something about Giuseppe Penone at the time (whom you wrote about in June) but got thoroughly side-tracked by your other posts.

re. your latest post, do you know of the Cloud Appreciation Society? http://cloudappreciationsociety.org.

My previous comment was superfluous, sorry-- I see you already mentioned the Cloud Appreciation Society last June and have read The Cloudspotter's Guide.

Thanks - glad you like the blog. I'm not that assiduous or consistent in labelling posts but the cloud label at the bottom of this one takes you to earlier posts that refer to clouds (at least all those I've remembered to label).