At the Loch of the Green Corrie

Andrew Greig is a Scottish novelist, poet and mountaineering writer who I think I first read in Alec Finlay's anthology The Way to Cold Mountain (2001).  There he had a short prose piece called 'By the Loch of the Green Corrie' about a quest to find and fish in the loch that the poet Norman MacCaig (1910-96) had considered his favourite spot in the world.   The loch's location is revealed by an old friend of MacCaig and Grieg then heads off, accompanied by two friends (better fishermen than he) to try to find it.  'It's a gem all right.  Yes, green rough grass and screeds of grey scree.  Held in a bowl, secluded, quiet, its own world.  Quinag in the distance.  Nothing else.'  They fish all day but get no catches.  The mist comes in.  'Sounds of water, wind over grass, occasional shrill keek of a lone bird of prey.  The Loch of the Green Corrie began to sink into me.'  They stay for another day but still no luck. They pack up and leave.  'We're grubby, fish-free but feeling very alive, in touch, refreshed.  The homage is done, for this year.' 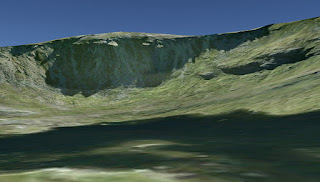 'The slope opposite rises like a breaking frozen wave of grey and green'
Screen dump showing my own attempt to locate the Loch of the Green Corrie, whilst sitting here using Google Earth

A book-length homage, expanded from this original essay, appeared last year, the centenary of MacCaig's birth.  The account of the fishing trip is fuller and longer, with the addition of an extra day and digressions on poetry, geology, land-ownership and the right way to live.  I felt quite envious, never having myself camped out in the Highlands or experienced a Hemingwayesque fishing holiday (or even, come to think of it, met anyone who owns a fishing rod), but I did smile to myself when the trip ended with the three friends abandoning their tents to head off for some posh hotel food.  There they raise a glass to MacCaig, whose own poems and observations on the landscape are scattered through this book.  In 'Descent from the Green Corrie', for example, MacCaig describes the walk down 'on screes or boggy asphodel. / And the elation that for a moment fills you / Beside the misty cairn's that lesser thing, / A memory of it.' 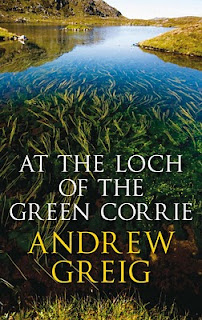 The book ends with an account of Andrew Greig's return to the area in 2008, to interview some of Norman MacCaig's surviving friends and have one more go at catching the fish.  Again he spends hours there, until the far side of the corrie begins to lose colour and 'a pale spiral swirls and flattens, coming this way.  A rattling sound, then in a drenching blow the hail squall hits.'  So he leaves empty handed, but on his way home manages at last to catch a fish, in a loch of his own choosing.  And there the book ends, although Greig was back again last year, this time with Billy Connolly, fiddler Aly Bain and a BBC film crew.  A brief clip shows it to have been extremely bracing weather; after a massive overnight snowstorm Connolly is trying to put a fly on his rod and is heard to complain "Could Norman no'like Jamaica or something?"

Email ThisBlogThis!Share to TwitterShare to FacebookShare to Pinterest
Labels: lakes