Face to face with sheer mountains of water 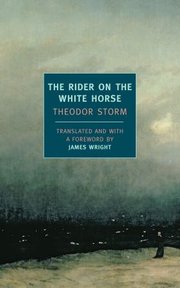 The main reason the last three posts have featured both James Wright and German literature is that I've been reading Wright's translations of Theodor Storm in The Rider on the White Horse, originally published in 1964.  Wright's involvement in translating poetry from Spanish and German influenced a transformation in style around the time of The Branch Will Not Break (1963), in which he abandoned traditional poetic forms for a free verse that has been described as 'pastoral surrealism, built around strong images and a simple spoken rhetoric.'  The second poem in that book actually begins with these lines of Theodor Storm: 'Dark cypresses- / The world is uneasily happy: / It will all be forgotten.'   In The Rider on the White Horse it is wonderful to have nearly three hundred pages of German literature translated by such a good poet.  It reminds me that another short novel that I've mentioned here, Adalbert Stifter's Rock Crystal, was translated in 1945 by Marianne Moore (with Elizabeth Mayer).  And Elizabeth Mayer also collaborated with Louise Bogan on books by Goethe and Jünger, and translated Goethe's Italian Journey with W.H. Auden. (That journey came up earlier this week in the comments to my post on landscape seen through windows, when Mike C referred to Tischbein's sketch of Goethe leaning out of a window in Rome).

The Rider on the White Horse contains eight stories, many of which share a similar theme of thwarted love recollected in old age, and also a common setting: the North Friesland coast.  'Aquis Submersis', for example, starts with a description of heathland with its sweet clouds of erica and resinous bushes, a village with one single tall poplar and, out to the west, the 'luminous green of the marshes and, beyond them, the silver flood of the sea'.  Maps and photographs of this distinctive landscape can be found on the Theodor Storm website. 'The Rider on the White Horse' (Der Schimmelreiter) is based on the legend of a horse and rider that appears when storms threaten the dikes.  The New York Review Books site, calls it 'a story of devotion and disappointment, of pettiness and superstition, of spiritual pride and ultimate desolation, and of the beauty and indifference of the natural world.'  It tells the life of Hauke Haien, dikemaster and rider of the white horse, who oversees the construction of a new dike only to see it threatened by the sea in a great storm.  He rides out to stand 'face to face with sheer mountains of water that reared against the night sky, clambered up over one another's shoulders in the terrible twilight, and rushed, one white-crowned avalanche after another, against the shore ... The white horse pawed the ground and snorted into the storm, but the rider felt that here, at last, human strength had reached its limit.  Now it was time for night to fall, and chaos, and death.'

The influence of landscape and weather is not confined to the end of this story - there is, for example, a winter festival (Eisboseln) on the frozen marshes, where Hauke wins acclaim for his victory in a game requiring a ball to be thrown across the fields towards a distant goal.  But the main reason this is such an interesting combination of landscape and literature is that the story itself is about the reimagining and reshaping of the environment.  It is a theme that can be written in practical or mythic terms, as is evident in Theodor Storm's blend of realism and Romanticism.  There are echoes of Goethe's Faust, who towards the end of the play, is rewarded by the Emperor with permission to reclaim land from the sea, only to find his progress impeded by an old couple holding out against the development (a story we still see repeated, as in Donald Trump's construction of a golf course near Aberdeen).  Storm describes the boy Hauke bringing some clay home with him, to sit by his father 'and there, by the light of a narrow tallow candle, he would model little dikes of all sizes and shapes; and then he would set them in a pan of water and try to re-create the beating of the waves against the shore.  Or he would take out his writing slate and sketch the profile of the dike - the side facing the sea - as he felt it ought to look.'  Then, years later, as the dikemaster he is able to contemplate his grand project:  'the tide was low and the golden sunlight of September gleamed on the naked strip of mud, a hundred feet or so across, and into the deep watercourse through which, even now, the sea was pouring.  "It could be dammed up," Hauke murmured...'
Posted by Plinius at 12:40 pm