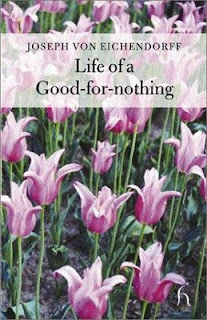 A reference to one of Joseph von Eichendorff's poems in that last post reminds me that I've not previously mentioned here one of my favourite Romantic Novellen, his 'Life of a Good-for-Nothing' (1826).  Its guileless hero makes his way to Italy... 'Eventually, when I had covered quite a distance, I gathered that I was only a few miles from Rome. This filled me with joy, for when I was a child at home I had heard many wonderful stories of the splendour of this city. As I lay on the grass outside the mill on Sunday afternoons and everything around was so quiet, I used to think that Rome must be like the clouds moving above me, with wonderful mountains and ravines going down to the blue sea, and golden gates, and tall gleaming towers on which the golden-robed angels were singing. Night had fallen long since, and the moon was shining brightly when I finally came out of the wood onto a hilltop and suddenly saw the city in the distance. The sea was glimmering far off, the immeasurable heavens were twinkling and sparkling with their countless stars, and below them lay the Holy City, of which only a long strip of mist was visible, like a sleeping lion on the quiet earth, while the hills stood round like dark giants watching over it.' (trans. F.G. Nichols)

He walks on over 'a wide, lonely heath' and on to the city where 'the tall palaces and gates and the golden cupolas gleamed in the bright moonlight.'  We have entered a Rome of the northern imagination here, with the same appeal as that dream image of 'Amerika' in Kafka's novel (which I quoted from here in an earlier post). Eichendorff's hero goes 'past a few small houses and then through a magnificent gate into the renowned city of Rome. The moon shone between the palaces and down into the streets as though it were broad daylight, but the streets were all deserted except for the occasional ragged fellow lying in a marble doorway in the warm night and sleeping like the dead. The fountains were plashing in the silent squares, and the gardens along the street were rustling and filling the air with refreshing scents.'  In Rome he encounters a painter and visits his studio in the attic of an old house, where we are given one of those images of the Romantic artist at the window I described yesterday. 'The painter flung the window open, so that the fresh morning air swirled through the whole room. There was a marvellous outlook over the city and towards the mountains, with the early sun shining on the white villas and vineyards. "Here's to our cool green Germany beyond those mountains!" cried the painter, drinking from the bottle he then passed to me. I responded to him politely and in my heart I thought again and again of my beautiful distant home.'
Posted by Plinius at 8:28 pm