Sometimes Doing Something Leads to Nothing 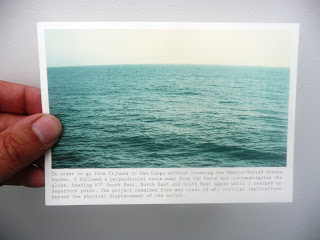 Francis Alÿs, The Loop, Tijuana - San Diego 1997
Postcard given free at the exhibition Francis Alÿs: A Story of Deception

One of the best exhibitions I've seen in London this year has been Francis Alÿs: A Story of Deception, and in the very first room you encounter a kind of landscape film - footage of a mirage on a desert highway in Patagonia.  This work provides the title for the exhibition and it is accompanied by a small canvas with a murky indistinct view, Untitled, Patagonia 2004 - the canvas is slashed and, going further than Lucio Fontana, the cut actually penetrates the wall of the gallery.  The mirage reminded me of Herzog's Fata Morgana; other Alÿs works like Rehearsal I (1999-2001), where a VW Beetle is repeatedly driving up a hill, and Tornado (2000-10), documenting attempts to to run into the eye of a dust storm, might also have been scenes in Herzog's films.

In my previous post on Francis Alÿs I described When Faith Moves Mountains, a communal effort that challenged earlier land art. "When Richard Long made his walks in the Peruvian desert, he was pursuing a contemplative practice that distanced him from the immediate social context. When Robert Smithson built the Spiral Jetty on the Salt Lake in Utah, he was turning civil engineering into sculpture and vice versa. Here, we have attempted to create a kind of Land art for the land-less, and, with the help of hundreds of people and shovels, we created a social allegory." In this exhibition there were other works that provided interesting contrasts with land artists, like Paradox of Praxis 1 (Sometimes Doing Something Leads to Nothing) (1997) where, three years before Andy Goldsworthy left snowballs melting around London, Alÿs was pushing a block of ice around the centre of Mexico City until it disappeared.


This kind of walking project, reminiscent of Richard Long but with a strong social or political edge, has been a persistent element of Alÿs's practice.  In The Green Line he trod the 1948-67 border between Israel and Jordan dripping green paint as he went.  In The Collectors (1990-92) he walked round Mexico City with magnetised 'dogs' collecting metal detritus.  And in my favourite, Patriotic Tales (1997), he 'led a circle of sheep around the flagpole in the Zócalo, the ceremonial square and the site of political rallies. The action is based on an event in 1968 when civil servants were paraded in the city to show support for the government, but bleated like sheep to protest their subservience.'

Great post. I saw Francis ALys's exhibition in the Tamayo museum in Mexico City. I was blown away by his work. I wrote my thoughts in my blog on intercultural living: http://bit.ly/1lO3ODj