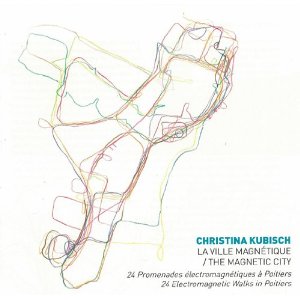 Ten years ago I went to the Hayward Gallery's Sonic Boom exhibition where one of the more memorable works, Christina Kubisch's Oasis 2000: Music for a Concrete Jungle, required us to put on headphones that replaced the noise of the city on the gallery's bleak concrete terrace with a soundworld recorded in a distant rain forest.  In more recent years the city itself has been the subject of her investigations and in her 'electrical walks' participants wear special headphones that pick up the waves emanating from 'light systems, transformers, anti-theft security devices, surveillance cameras, cell phones, computers, elevators, streetcar cables, antennae, navigation systes, automated teller machines, neon advertising, electric devices, etc.'  As she says in the liner notes to the album The Magnetic City (2008), recorded in Poitiers, "often what you can see normally and what you hear electromagnetically, is quite different: quiet streets burst out with strong electrical hums, the lively market place is quiet instead, the train station is a dense net of regular beats and clicks, the parking Carnot is the place where antennas fill the air with internet signals, the ATM machines of the banks hum musical chords and the security gates in the shopping streets surprise by their volume and intensity of continuous signals."

In an interview in Cabinet Magazine she describes the sonic characteristics of different cities.  "In Bremen, there’s a tram system that you hear all over the city, even when you’re not near it. It’s a kind of basic drone that’s very present. And in Madrid, a really persistent sound is that of the mobile phones that people carry around. You don’t hear people talking, of course. But you hear when they dial—that moment when the information is being transported. It’s a sort of short chirp: dip, da-rip, da-rip, da-rip, something like that. You hear that every moment, sometimes in duos or trios, because, in Madrid, everyone lives with their phones. In Taiwan the sounds are very aesthetic. Maybe they have a new technology that’s already very sophisticated. In Paris you have some very heavy sounds, like in the train stations, where there is so much interrupted current. Train stations in general are very full, heavy, and dusty with sound." You can hear sound samples at the Cabinet Magazine website or by clicking on the link to Boomkat below: