The New Arcadian Press aims 'to generate a continuous programme of artistic, scholarly and poetic research into cultural landscape.' Since 1981 The New Arcadian Journal has discussed William Shenstone, William Kent, John Sell Cotman and Ian Hamilton Finlay, along with varius British Arcadias, from the northern fells to the shingle of Dungeness. The cover shown here is my copy of issue 41/42 (number 199 out of the edition of 300!), bought recently at the Small Publishers Fair in London.

Among the illustrations in Landfall are a set of music boxes by Grahame Jones, each with a different musical landscape on the lid. The first is the Shoreland Musical Box, showing the Seven Sisters, Sussex, 'an invocation of Seafoam, second of the four movements of The Sea by Frank Bridge (1879-1941), inhabitant of the Sussex shoreland.' Next is the Broadland Music Box, 'an invocation of Dawn, the first of the Four Sea Interludes in the opera Peter Grimes. Benjamin Britten (1913-1976) was a Suffolk man and his music oozes the flatlands. Peter Grimes and the Sea Interludes are as much to do with the land as the sea.' The third musical box depicts Chanctonbury Ring, 'an invocation of the musical response, by John Ireland (1879-1962), to the barrows, tree clumps and hillforts of the Sussex downs; in particular to Chanctonbury Ring, which evokes this tree planted, circular fort.' Then there is an Upland Musical Box, inspired by the North Country Sketches of Delius and a Moorland Musical Box based on the Moorland Suite of Gustav Holst. Finally, to illustrate some Litanies in honour of Alfred Wainwright, there is a Lakeland Musical Box, 'an invocation of the composition for strings, Land of the Mountain and Flood, by Hamish MacCunn (1868-1916).

The main article in this edition of the New Arcadian Journal is Michael Charlesworth's 'Shoreland', about the gardens of Derek Jarman and Brian Yale. It mentions Jarman's The Last Of England (with its 'landscape of rubble and repression'), a film I saw before actually getting to visit the garden itself. I remember being struck by the film's soundtrack with its persistent, oppressive background hum from the nuclear power station. The day we went to Dungeness to see Jarman's garden, the electricity could be heard even above the noise of the wind, which was so fierce you could hardly stand up, and the cold bleakness of the place seemed to discourage any lingering examination of the garden sculptures. 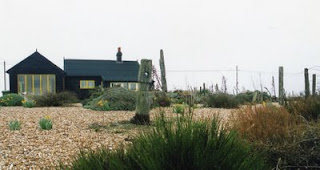 I wasn't aware of the New Arcadian...thanks for posting this.