Looking at some of Cildo Meireles' Arte Física (Physical Art) from 1969-70 at Tate Modern on Saturday I was reminded of the early manifestations of land art being made then in the USA. For example (to quote from the Tate magazine's interview with Meireles) there was his 'Cordões/30km de Linha Estendidos (Cords/30km Extended line), 1969, which involved laying string along 30 kilometres of beach front and then collecting what was left of it'. It's a reminder (if one were needed) that this kind of conceptual engagement with landscape was going on all over the world - in this case, Brazil. 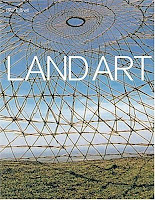 A couple of years ago the Tate published an introduction to land art written by Ben Tufnell (who curated the Hamish Fulton exhibition there in 2002). It 'attempts to redress a historical imbalance in previous accounts, whereby American artists, particularly those working with earthworks are prioritised over Europeans whose work is perhaps small-scale or ephemeral.' Thus the opening chapter is on Richard Long, with Robert Smithson relegated to chapter 2. However, reading about them in this order really serves to emphasise how full of fertile ideas Smithson was. Long has largely lets his minimal work speak for itself, although Tufnell quotes Long's objection to 'so-called American land art' with its need for large tracts of real estate and earth moving machinery.

Ironically, the perception that it is European artists who create 'small-scale or ephemeral' land art, along with the fame of Andy Goldsworthy, may have obscured the contribution of North American's working in this quieter vein. Ben Tufnell mentions Patrick Dougherty, Roy Staab and Michael Singer. Works by Singer, 'such as the Marsh Ritual Series 1973, Long Island, and the Glades Ritual Series 1975, Everglades National Park, Florida, were composed of sculptural constructions spread across large areas of landscape, each barely visible but gradually revealed, through the ongoing engagement of the viewer, as part of a complex whole.'

Non-Western land art is largely beyond the scope of Ben Tufnell's survey, but he does say that Andy Goldsworthy has inspired a kind of school of land art in Japan, citing the works included in the Hakone Open-Air museum's 30th anniversary exhibition 'Forms in Nature.' Among the artists who exhibited were Masafumi Maita, Takamasa Kuniyasu (see below) and Toshikatsu Endo (whose Epitaph can be seen at Flakstad in Norway). If anyone knows more about the ways in which these Japanese artists see Goldsworthy as an influence, please feel free to leave a comment...