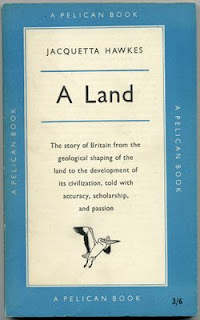 Jacquetta Hawkes' A Land can be seen as one manifestation of the widespread interest in Britain's landscape pursued by artists, composers, film makers and writers in the 1940s. It is a consciously poetic history of the land, opening with the author lying in her back garden imagining the earth's strata beneath her. Throughout the book she emphasises her feeling of connectedness with deep time. She describes the formation of rocks, the evolution of animals and finally the influence of people on the landscape - initially good, increasingly malign. The book ends with 'A Prospect of Britain', from the city streets round her home in Primrose Hill to the different landscapes of Britain described in the order they were created: the chalk Downs, the Costswolds, the West Riding, the Lake District. She says of these places that 'their poetry, the images rising from the darkness of unconscious memory, seem to be as much a part of the growth of that countryside as the distinctive plants and animals which it more directly supports. Hardy's poems grew from the Wessex downlands, Clare's from the tiny stretch of the Midlands in which alone he felt at home; Crabbe's are the bitter fruit of the Norfolk Coast: 'There poppies, nodding mock the hope of toil, / There the blue bugloss paints the sterile soil.'

The philosophy of A Land can be read in condensed form in the description of her immediate surroundings: 'the York Stone paving, worn by footsteps into attractive miniature landscapes, survives in the side streets but has recently been replaced in Fitzroy Road itself by lifeless cement slabs.' Like W. G. Hoskins, whose The Making of the English Landscape appeared in 1955, she was no fan of the modern city. Indeed, in a passage impossible to imagine someone writing today, she explicitly locates 'one of the best of times to have been alive in this country' for 'all classes' in Queen Anne's reign and contrasts life then with the materialism of modern Britain. 'It is idiocy to pretend that to live in a lovely countryside, to handle only comely things, and to know that only comely things will issue from your hands is of no importance when set beside the amount of cash in your purse'. 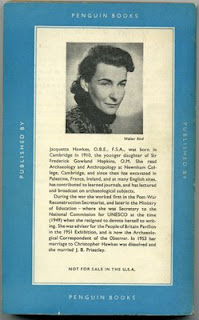 Jacquetta Hawkes moved in artistic circles and was friendly with Henry Moore. In A Land she waxes lyrical about his use of native stones: 'it is hardly possible to express in prose the extraordinary awareness of the unity of past and present, of mind and matter, of man and man's origins which these thoughts bring to me. Once when I was in Moore's studio and saw one of his reclining figures with the shaft of a belemnite exposed in the thigh, my vision of this unity was overwhelming.'

There are hints of a rather overheated imagination in A Land, but it was her 1980 novel A Quest for Love that combined archaeology and sex in a mixture that alienated many of her admirers. Christine Finn has written an entertaining account of this affair. She wonders of Hawkes, 'are her manuscripts, set down in her hard-to-read handwriting, meant to be entirely serious? Her script for Figures in a Landscape, an experimental film, starts: "Cornwall, a horn of rock, Cornwall is England's horn, Its point thrust out into the sea, Smooth or ribbed with waves . . ."' The photograph of Hawkes on the Penguin paperback doesn't give much hint of volcanic sexual passion, but her lover J. B. Priestley described her in elemental terms to a friend: "What a woman — ice without and fire within!"
Posted by Plinius at 9:00 am

Despite dabbling with geography A-Level it was this book that made me finally 'understand' geological time, although in the original Cresset Press hardback edition, which you could once find in every second-hand book shop.
best, Colin

Thanks Colin. I seem to recall the Cresset Press edition having Henry Moore drawings?
In some ways Jacquetta Hawkes covered rather similar ground to Alan Titchmarsh in the recent glossy and high-tech TV series 'British Isles: A Natural History'. But how times have changed...

Delighted to see this, I was re-reading A Land only yesterday. And thankyou for flagging up the ST feature.

I am also Jacquetta's authorised biographer. For more context on A Land,see an interim bio online here
http://humanitieslab.stanford.edu/ChristineFinn
/home

I have been championing Jacquetta for years, since coming to her work when I was studying archaeology.

I would love to hear from more lovers of A Land, and indeed, her work in general.

And yes, look for the Henry Moore illustrated Cresset edition of 1951, which has two beautiful colour plates.