The Moon Appearing and the Breeze Arriving

I have been reading rather enviously Gardenhistorygirl's recent posts about the gardens of Suzhou. The nearest I've got to seeing any of these is the Metropolitan Museum's Astor Court in New York - this was was modeled on the Late Spring Studio at Wang Shi Yuan, a Suzhou garden with particularly evocative names (e.g. The Pavilion of the Moon Appearing and the Breeze Arriving). If I ever get to Suzhou I'd love to see the rockery at Shi Zi Lin, the artificial hill at Cang Lang Ting, the cliff walk at Ou Yuan and the collection of miniature landscapes at Lin Yuan. I can imagine sipping tea in the Hall of Distant Fragrance in Zhuo Zheng Yuan, gazing out onto the water garden... I'm sure the reality is less poetic.

The Oxford Companion to Gardens describes Suzhou as ideally situated: plentiful water, pleasant hills, good climate and a local supply of finest garden stones. These stones came from an island in Lake Tai (Taihu). 'They are grey limestone boulders excavated from the water where waves, hammering against small, harder stones embedded in the rock, have eroded them into peculiar shapes and textures. Those that are wrinkled, emaciated, and full of jagged holes are considered the best and, in the Song dynasty, were some of the most expensive objects in the empire. Although, originally, Taihu stones lost value if improved by human hands, a local industry developed which encouraged the natural weathering process by placing in the lake suitable specimens of limestone for later harvesting. Books on rock collecting, like Du Wuan's Yun Lin Shi Bu (Stone Catalogue of Cloudy Forest) written c. 1125, constantly warned connoisseurs to beware of fakes.' 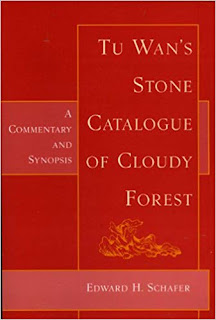