'From brightening fields of ether fair-disclos'd, /Child of the sun, refulgent Summer comes...' Hot sunny weather today beings to mind these opening lines of James Thomson's poem 'Summer' (1730).  In his enjoyable survey Lives of the Poets (1998), Michael Schmidt devotes a whole chapter to Thomson, but calls it 'Dead Pastoral'. Here are some of his arguments against Thomson:

Pretty damning. Of course Schmidt does credit Thomson with a few good moments, like these delicious lines from 'Summer':


'Bear me, Pomona! to thy citron groves;
To where the lemon and the piercing lime,
With the deep orange glowing through the green,
Their lighter glories blend. Lay me reclined
Beneath the spreading tamarind, that shakes,
Fanned by the breeze, its fever-cooling fruit.'

Schmidt argues that Thomson can only really be enjoyed in odd lines. 'He lacks Wordsworth's engagement. His is an enthusiasm of the various senses, but the whole man is withheld. Wordsworth's imagination is continuous with the experienced world, Thomson's tangential to it.' But Thomson has always been dipped into for the poetic fragments, like the quotations that artists like Turner appended to their paintings. Turner went so far as to paint a tribute to the poet, Thomson's Aeolian Harp (1809), showing an ideal memorial to the poet in which a harp placed on his tomb could respond to the cycle of the seasons. Turner wrote lines to accompany the painting: '... Let Summer shed her many blossoms fair, / to shield the trembling strings in noon-tide ray; / While ever and anon the dulcet air / shall rapturous thrill, or sigh in sweets away...' 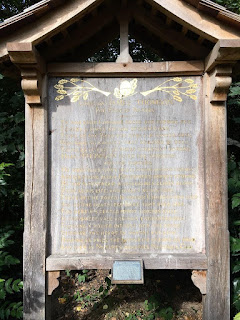 The James Thomson memorial in Richmond
Posted by Plinius at 1:26 pm