Strange underwater landscapes are currently on display at the South Bank - the Institute for Figuring have brought their hyperbolic crochet coral reef project to England:


'The IFF reef has been inspired by the principles of hyperbolic crochet originally developed by mathematician Dr Daina Taimina. In 1997 Dr Taimina discovered how to make models of the geometry known as hyperbolic space using the feminine art of crochet. Until that time most mathematicians had believed it was impossible to construct physical models of hyperbolic forms, yet nature had been doing just that for hundreds of millions of years. It turns out that many marine organisms embody hyperbolic geometry, among them kelps, corals, sponges and nudibranchs. The IFF reef not only looks like an actual coral reef, it draws on the same underlying geometry endemic in the oceanic realm... Over the past two years, through increasingly freeform experimentation, we have discovered that tiny changes in the underlying crochet algorithms will result in major changes to the resulting forms. By exploiting this insight we have gradually evolved a wide taxonomy of hyperbolic crochet “species.” To our surprise, the range of possible forms seems to be endless, yet they all result from extremely simple instruction sets. Just as the teeming variety of living species on earth result from different versions of the DNA-based genetic code, so too a huge range of crochet hyperbolic species have been brought into being through minor modifications to the underlying code. As time progresses the models have “evolved” from the simple purity of Dr Taimina’s mathematically precise algorithms to more complex aberrations that invoke ever more naturalistic forms.' 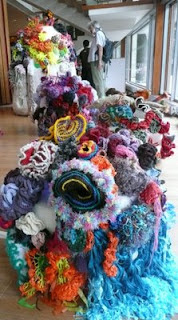 The London reef exhibition is in two parts. The Hayward Gallery shows some of the earlier works from this project: 'the Bleached Reef, a new configuration of the Ladies Silurian Reef, the beautifully archaic Branched Anemone Garden, and the ever-growing Toxic Reef... the wondrously surreal Chicago Cambrian Reef (curated by IFF contributor Aviva Alter), plus a new formation of the Beaded Reef by master beaders Rebecca Peapples and Sue Von Ohlsen, The Exploding Plastic Inevitable Reef (with hot-pink sand by Kathleen Greco), and the Bottle Tree Grove (featuring works by Christine Wertheim, Evelyn Hardin and Nadia Severns)'. The Royal Festival Hall has a display of reefs made by UK crafters (see photograph above). Mrs Plinius, who is a dab hand with the needles, was one of the contributors.
Posted by Plinius at 10:54 am

Park House School in Newbury started the Newbury Coral Reef. Many of our pieces are currently onm display on The Arts Council Stand at the Knitting and Stitching Show in Alexander Palace.Our pupils and parents have enthusiastically worked on this project.