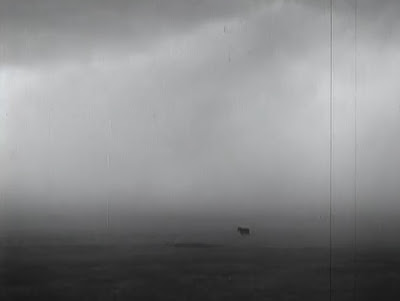 Last week I watched the new Naxos DVD of The Plow that Broke the Plains (1936), the Dust Bowl documentary described by its director, Pare Lorentz, as a ‘melodrama of nature’. The film is partly renowned for Virgil Thomson’s score, divided into six movements: Prelude, Pastorale (Grass), Cattle, Blues (Speculation), Drought, and Devastation. There is an excellent Pare Lorentz site with the full Whitmanesque script and an extract from the film. For me the most striking section of the film comes when the plains are transformed into a grey sea of dust and the sound of a pump organ is heard on the score playing what the notes to the DVD describe as a ‘bare, neo-medieval two part counterpoint.’ It is very affecting.

From a landscape perspective the next film Lorentz and Thomson made, The River, is even more interesting. The script was praised by James Joyce as "the most beautiful prose that I have heard in ten years", and was nominated for the Pulitzer Prize for Poetry in 1938. It describes the Mississippi in its Eden-like state before the coming of industry, agriculture, ‘a hundred cities and a thousand towns’. It laments the poverty and destruction caused by poor land and floods, but holds out the hope of redemption through New Deal projects like the dams of the Tennessee River Authority. There are some beautiful images, although some of the most striking, like a moving river of logs, were apparently taken from footage made for other films.

The Lorentz site also has a page on The City, a film sponsored by The American Institute of Planners for the 1939 World's Fair. This was made by Willard Van Dyke and Ralph Steiner, who had worked on the earlier films. Lorentz wrote the script, Lewis Mumford narrated it, and the music this time was by Aaron Copland.
Posted by Plinius at 3:54 pm