Landscape Architecture of the Great Painters of Italy 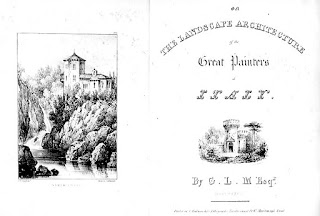 Gilbert Meason was the first writer to use the term ‘landscape architecture’, in the title of his book The Landscape Architecture of the Great Painters of Italy (1828). It says here he ‘died without the faintest idea that his concept of 'landscape architecture' was destined for a worldwide future. Few copies of the book were printed but one of them fell into the hands of John Claudius Loudon, the most prolific garden author of any age. Loudon took up the term and passed it to Andrew Jackson Downing, who passed it to Frederick Law Olmsted...’ And the rest is history.

Apparently, few copies of Meason’s book were produced in 1828 and I don’t think it’s been reprinted. However, the British Library has a copy of the original which you can flick through in their rare books room. Its frontispiece, the first of many lithographs in the book by H W Burgess, is based on a Dominichino painting. The book then opens with a quotation from Reynolds' Discourses which urges architects to aim for ‘variety and intricacy’, an approach consistent with Meason’s picturesque ideal. The text that follows discusses various types of building, in chapters on: The Rise of Domestic Architecture, Defensive Architecture, Roman Villas, Masonry of Roman Architecture, Architecture of the Middle Ages, Domestic Architecture of England, Architecture of the Italian Painters, Tuscan Architecture and Gothic Architecture. At the back are the illustrations accompanied with brief descriptions - Burgess’s depictions of buildings that appear in the drawings and paintings of artists such as Raphael, Leonardo, Andrea Mantegna, Sermonita, Claude, Palma Vecchio, Guercino and Lavinia Fontana.

Meason explains that ‘in selecting examples of landscape architecture from the pictures of Italy, we have avoided those in the foreground or in street architecture, as well as those, (such as in Claude,) which had so much Grecian or Roman ruins attached to them as gave the air of composition architecture of the artist.’ So, interestingly, he was tending to choose buildings that were quite incidental to the main theme of the painting. Meason found that these tended to display a mixture of architectural styles, partly based on real buildings sketched by the artists. He quotes Richard Payne Knight: ‘the best style of architecture for irregular and picturesque houses, which can now be adopted, is that mixed style which characterizes the buildings of Claude and the Poussins…’ Here are three examples of Meason’s landscape architecture (sadly without the lithographs).


Plate 1: This is taken from Titian and shows a castle with prominent round towers. Meason says ‘Titian seldom introduced buildings of consequence in his landscapes, and to such as are given, sheds and low mean buildings are joined. This building is in a landscape of a mountainous country. It is difficult to assign any period for its construction, or for what purpose part of the building was destined.’

Plate 15: This is a tower on a rocky promontory by ‘Nicolo Poussin’. ‘This picturesque building is only a small part of that magnificent pile in the fine picture of the infant Moses exposed. The scenery and site are by our artist, for the original had none of note near the extensive buildings. It is to the architecture of this picture that Sir Uvedale Price refers [Meason’s footnote: See Essays on the Picturesque vol ii p316]. The whole is evidently a composition; and in the central tower Poussin had for his model the castle of St. Angelo in Rome.’

Plate 54: Here Meason looked back as far as Giotto for his material, but the drawing takes some poetic license – it is a dark and rather Romantic sketch of a castle-like building. ‘We give another specimen of a building of this father of the art of painting, copied from a fresco in the Campo Santo. We have here a very early example of the Tuscan window: Outward steps lead to the door from the platform; and the large windows, and of course the principal rooms, are placed high in the building. These are indications of the necessity at the period of defensible country dwellings.’

Gilbert Meason wanted to see the landscape architecture of Italian painting recreated in the British countryside. ‘In selecting specimens out of many in our possession to illustrate this work, we have in view such as may be useful to architects in the composition of irregular mansions. These may be arranged under single towers, buildings of small size but simple in their form, and large edifices, picturesque in the disposition of their parts, and those parts of such breadth as to impress, in general, grandeur on the whole composition… Such edifices spread over the country would contribute most essentially to the beauty of British landscape.’
Posted by Plinius at 5:55 pm

You might be interested to know that Downton Castle--Payne Knight's own creation of the picturesque--though technically closed to the public (owned by a foreigner who visits just once a year) can be seen from the landscape, most of which is under the care of English Nature (contact them to try to get in). The original paths are largely intact and pass by many of Payne Knight's key landscape features, decrepit but still visible. It's an amazing place that needs more public recognition so that it will be properly preserved.