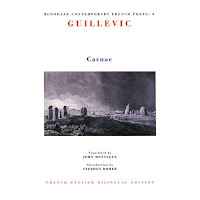 When I was at university I tried to model mathematically the spacing of the prehistoric menhirs at Carnac in Brittany and started to become interested in stories about this ancient landscape. Regrettably at that point I had never come across Guillevic’s Carnac (1961), a book now available in the excellent Bloodaxe Contemporary French Poets series. Guillevic (he dropped his first name) is one of those poets who seems to fit his environment – rugged, tough, paired down to the essentials. He grew up in a traditional and highly religious Breton speaking community but never learned the language. Guillevic went on to work at a tax office and write deceptively simple French poems about Choses (things). Carnac was composed after he left work at the age of 52, and it represented a return to the landscape of his childhood. He said that in it "I found myself completely, I found my country again, the land, the sea, I relived what I had been before."


Carnac throws up some fundamental questions on the relationship between an artist and the landscape. On this site, I’ve written about artistic responses to views, spaces and places rather than specific objects: a crab, say, or a lichen covered rock, or an old boat. In a review of Carnac, James Sallis writes that ‘traditionally the poet comes to the landscape to divest himself of naming, of differentiation, of all that prevents him from speaking generally. Incorporating, suggesting, the landscape offers escape from particularity.’ Guillevic is able to talk of the sea, the sun and the sand without describing them - there are only a couple of points where he deliberately moves into details (a list of the smells of Carnac for example: warmed stone, saxifrage, tar, slurry, dried seaweed...) Furthermore, Sallis continues, the poet in a landscape, not only seeks ‘relief from naming, from knowing, he comes seeking also a paradoxical relief from self. In classic nature poetry, the landscape actually becomes an extension of self, body and world synonymous. But it is into the very gap between the two, into that divide, that Guillevic writes Carnac.’

When Guillevic looks at the sea, he wants to give it human attributes, ‘alternately maternal and monstrous’, as Stephen Romer puts it in his introduction to Carnac. But the poet recognizes that the sea is ultimately ‘the Absent, the Other, the Unknowable... Even worse: it is indifferent.’ No matter how we study a landscape or try to convey it in art, it remains fundamentally outside our comprehension. The sea provides a particularly compelling example of nature's alterity since it so easily resists interpretation and constantly changes. At one point in Carnac, Guillevic tracks the sea back to some salt marshes where he is able to ‘possess’ it, but only in the form of mounds of salt. Guillevic writes of both wanting to be the ocean and remain himself: he needs to preserve some distance in order to speak about his subject and avoid dissolving into formlessness (as in the Whistler sea painting I discussed here recently).

And what of Carnac’s megalithic stones? Although they are part of the same elemental landscape as the sea, the menhirs embody human activity and meaning (perhaps partly in any significance attaching to the stones’ placement that I once tried to investigate.) As Romer says, ‘they stand then, both in obeisance to, as well as in defiance against, the ocean, and as such reflect the poet’s own divided allegiances.’ Inevitably perhaps, Guillevic’s poems have themselves been compared to menhirs. For Denise Levertov, one of several eminent poets who have translated Guillevic into English, they are like ‘a gathering of sacred stones.'
Posted by Plinius at 7:32 pm

another insightful post. i always look forward to your readings, recommendations and thoughts.

Thanks - your positive feedback is much appreciated.