I feel a bit bad for not writing before now about the threat to Robert Smithson's Spiral Jetty. As the New York Times put it, 'a Canadian company’s plan to begin oil-drilling from a pair of barges near Rozel Point, on the edge of the lake... is not much different from drilling through the heart of Smithson’s earth sculpture.' DIA Foundation Director Jeffrey Weiss has said 'The expansive natural setting is integral to Smithson's artwork, providing an essential frame for experiencing the Spiral Jetty. Any incursion on the open landscape, including the proposed drilling, would significantly compromise this important work of art.'

The public comment period for the drilling application ended on February 13, so I guess we're now just waiting for the verdict. Living in a country where public sculpture is all the rage it seems improbable that the State of Utah would let this happen, but who knows? I was wondering where the best place is to keep up to date on this story. The DIA foundation site for Spiral Jetty says they'll post news. There's also a French site which is posting regular reports. 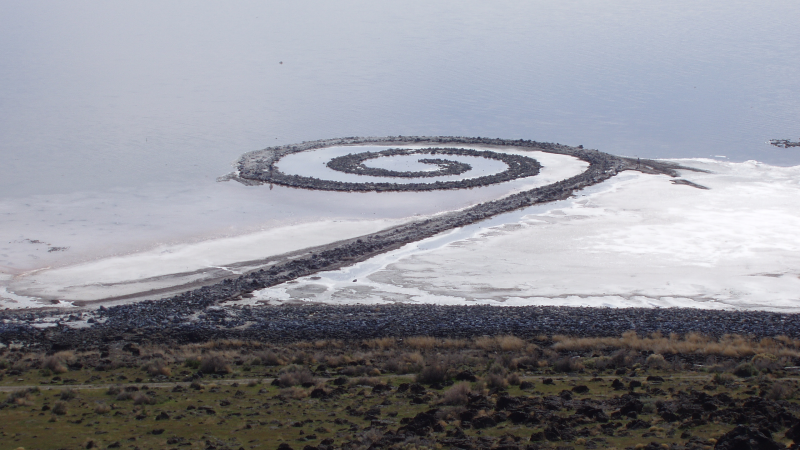 Postscript September 2015:  Utah officials received over 3,000 emails relating to the drilling and on August 7 2008 state officials rejected it. Of course the threat of future drilling remains and then there are the ongoing debates about maintaining the site and what the artists' intentions would have been.  Here are the opening paragraphs from a piece in the Art Newspaper yesterday.


The Great Salt Lake in Utah, home to Robert Smithson’s Spiral Jetty, is facing the most severe drought in its history. Water levels are “inches” fr om the historic low set in 1963, says Bonnie Baxter, the director of the Great Salt Lake Institute. As a result, the pink salt-encrusted basalt rocks of Spiral Jetty are perhaps the most exposed they have ever has been—the 1,500ft-long work was constructed in 1970 during a drought and subsequently submerged for more than three decades before re-emerging in 2004.

However, the consensus among the three organisations that look after the work (the Dia Art Foundation in New York, the Great Salt Lake Institute and the Utah Museum of Fine Arts) is that there is no need to take direct action to protect the work. “The current thinking by most is that Robert Smithson would have loved to see the environmental changes that occur around his artwork, so there is no real talk of intervention,” Baxter says.