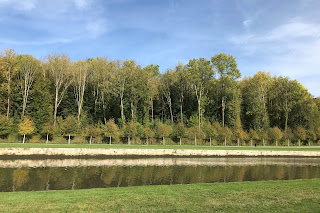 Last month we visited the Château de Vaux-le-Vicomte, just outside Paris.  It was the home of Nicolas Fouquet, Louis XIV's finance minister, and was the creation of three great seventeenth century artists: architect Louis Le Vau, painter Charles Le Brun and landscape designer André le Nôtre.  Throughout Vaux-le-Vicomte there are explanatory signs with diagrams explaining how le Nôtre constructed the estate to create optical illusions.  When you look out from the house across the garden (below), you can see a distant slope with a golden statue, but there is no sign of the garden's canal (above) which actually stretches right across the garden.  A sign informs visitors of what they can expect as they walk down into this landscape.  "The Grand Canal, invisible from the château's front steps, appears out of the blue.  The grottos, which seem to be on the pool's edge, get further away as you progress along the main path of the garden and now seem to be on the opposite side of the canal!  The statue of Hercules now seems impossible to reach..."  I think this clever example of 'decelerated perspective' put Mrs Plinius off walking as far as the Hercules statue but, as you can see below, I was not discouraged and went up to get a good look at it.

The sun was so strong that Hercules himself presented two very different perspectives, shadowy on the way up and gleaming magnificently when you looked back down at him.  Although I felt like I was dutifully walking along a sightline, one of those rays on a diagram connected to an imaginary eyeball, it was impossible not to be distracted by birdsong and the crunch of fallen leaves under your feet.  The sharp shadows and bright sunshine were perfect conditions to enjoy the garden's mathematical aesthetic and indulge in the scopophilia of all those viewing points.  But it was still possible to enjoy the feel of the breeze and smell of the damp grass and choose your own ways of experiencing the space.  My sons got caught up in a game of catching the falling leaves. 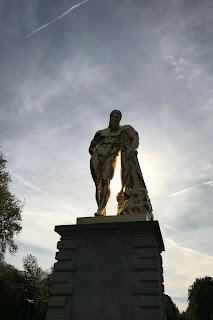 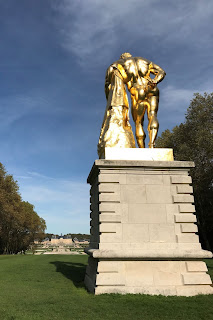 On the way back to the château, as you round one end of the canal, there is a great example of borrowed scenery (what Japanese gardeners call shakkei).  What you can see (below) is the Vallée de l'Anqueuil and medieval Pont de Mons, giving the impression that Fouquet's land extended into this idyllic unspoilt landscape.  Here, nature is incorporated within the realm of the garden, but this seems relatively modest when compared to the main design where (as Allen S. Weiss has written) infinity itself, in the form of the vanishing point, is brought into the garden's purview. 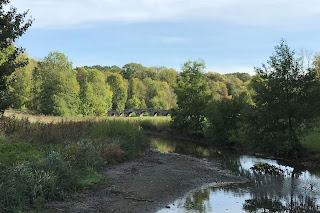 If you don't know it, and can find a reasonably-priced copy, landscape photographer Michael Kenna's book "Le Notre's Gardens" may be of interest.