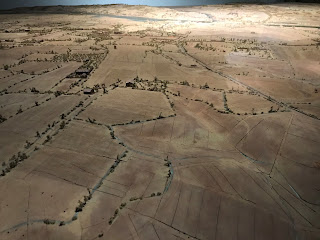 Two years ago I wrote here about the plans-reliefs that Andrew Graham-Dixon visited for a TV documentary - he described them as 'a collection of extraordinary but largely forgotten' table-top landscapes. I mentioned that some of them remain in Paris and last weekend I got to see them - they are on display in Les Invalides.  I framed the photograph above so that this example resembles a real aerial landscape.  However, it is eerily empty - there are roads and buildings but no sign of actual human life: no figures in the fields, no cattle or horses or any other animals.  None of the relief maps show anything happening in these landscapes.  They are quite different from the models we are used to seeing in museums that recreate a key historical event or evoke everyday life at some date in the past.  The plans-reliefs represent a rather bleak vision of the world, as mere terrain to be defended or fought over.  Seeing a relief map of Saint-Tropez in this context was a particular shock - a place that conjures ideas of life at its most joyous - sun, sea, wine, music and Brigitte Bardot on the beach...

Near the glass cabinet dedicated to St Tropez, there is another one containing the Chateau d'If.  I remember that when I first began reading The Count of Monte Cristo I didn't realise that this place, a strangely-named island fortress near Marseilles, was a real location (or that Monte Cristo is an actual island).  But as this relief map from 1681 shows, the Chateau d'If was a key French fortification long before Dumas wrote his novel and the fictional Edmond Dantès was wrongly imprisoned there. Chateau d'Ifs have subsequently multiplied in the many adaptations of Dumas' novel: plays, films and, most recently, video games.  Sometimes other islands have stood in for it - Saint Mary's Tower on Comino, for example, was used in a 2002 film.  Dumas himself would later create another kind of model of the Chateau d'If.  In 1846 he bestowed the name on a grand writer's studio that he had built in the grounds of his country home.  But Dumas spent a lot less time there than Dantès spent in the Chateau d'If - just two years later, short of money, he had to sell it.
Posted by Plinius at 6:54 pm