A dialectic of the near and the far

In 1072 the Chinese artist Guo Xi completed one of the most celebrated landscape paintings, Early Spring.  It is his only surviving large scale work - there are smaller scrolls in museums (I have mentioned one here before).  There is a story that he would 'have plasterers roughen the surface of a wall so that in painting his mountains and chasms he could follow the bumps and hollows they had made and get an even more convincing effect of relief' (Michael Sullivan, Symbols of Eternity).  One day I may do a post devoted to Guo's theories of painting, assembled by his son - Lofty Ambition in Forest and Streams (Ernest Fenollosa considered it, with the exception of a few dry sections, 'one of the greatest essays of the world').  Here I'll just provide five quotes about Early Spring interspersed with close-up details.

'His greatest surviving work, the Early Spring of 1072 in the National Public Museum, Taipei, shows him as a master of monumental design, in which the realistic details of buildings, boats, and fishermen are totally subordinated to broad effects and dramatic contrasts of light and dark.' - Michael Sullivan, Symbols of Eternity 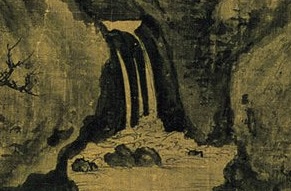 'Rather than an expression of the painter's love of nature in the abstract, it may have been understood by contemporary audiences at court as showing, not real nature, but the ideal landscape of a Daoist paradise.' - Craig Clunas, Art in China 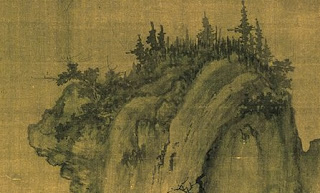 'The man Guo Xi served, the emperor Shenzong, only rarely in his life had occasion to directly enjoy the natural world outside of his imperial palaces ... Early Spring is a vision of flux, growth, life, and order precisely suited to the imperial gaze.' Richard M. Barnhart, Three Thousand Years of Chinese Painting 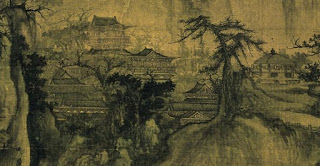 'The mountain as majestic lord is complemented by the figures that reflect perceptions of social hierarchy.  At the bottom of the composition, country fol and fishermen represent the foundation of society.' - Alfreda Murck, Poetry and Painting in Song China 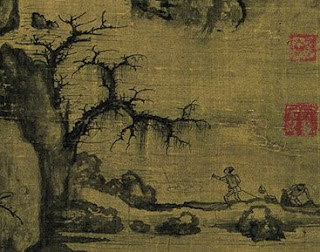 'One cannot keep the near separate from the far; the two mesh intimately, mirroring each other rather than standing apart; so much so that there is no place for middle distance in a work such as this, which exhibits a dialectic of the near and the far - of the rocks below and the mountains above and behind it.' - Edward S. Casey, Representing Place: Landscape Painting and Maps 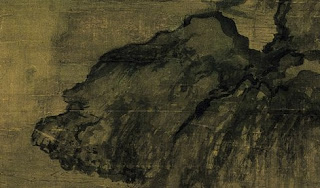 My reason for highlighting one datable painting from history in this way will become clear in my next blog post.  Suffice it to say now that I find it fascinating to think about the point at which this painting emerged into the river of world history: in the time of Omar Khayyam and El Cid, and just as a group of needleworkers whose names have not come down to us were embroidering the Bayeux Tapestry.
Posted by Plinius at 9:06 am