Reading the exiled Ovid's Tristia and Black Sea Letters you keep wanting him to tell his correspondents back in Rome about the landscape at Tomis.  But all of these poems are about one thing - his desire to get back home - and so his brief descriptions do not go into any details, they are a means of provoking sympathy in the reader. Here is what translator Peter Green says about Ovid's account of the region where Tomis was situated, on the tip of a peninsula, seventy miles south of the Danube delta.


'Its treeless, monotonous steppe, he writes, resembles a frozen grey sea, patched - appropriately enough - with wormwood, a maquis of bitter and symbolic associations.  There are no vines, he repeatedly complains, no orchards: spring in the Italian sense doesn't exist and few birds sing.  The countryside is ugly, harsh, savage, inhuman.  The water is brackish, and merely exacerbates thirst.  But Ovid's two great fearful obsessions are the biting cold and the constant barbarian raids. Again and again he returns to the snow, the ice, the sub-zero temperatures: bullock-carts creaking across the frozen Danube, wine broken off and sold in chunks, the violent glacial north-easter (today known as the crivat) that rips off roof-tiles, sears the skin, and even blows down buildings if they are not solidly constructed.'

Was he exaggerating? In the tenth Black Sea Letter Ovid actually gave some scientific proof that the Black Sea did actually freeze at Tomis.  In this area many freshwater rivers flow into the sea and there is a cold north wind that chills the air.  As Peter Green says in one of his endnotes (which are wonderfully witty and erudite): 'Dr. Stefan Stoenescu informs me that 'the rich salty waters [of the Danube delta] create a brackish region ear the littoral which allows an inversion of temperature to take place.  The unsalty waters of the Danube have sufficient power to maintain a thin layer of comparatively sweet fresh water above the deeply settled salty Mediterranean current.  As a result, near the Danube delta shores freezing is not an unusual occurrence.  Ovid was right.'' 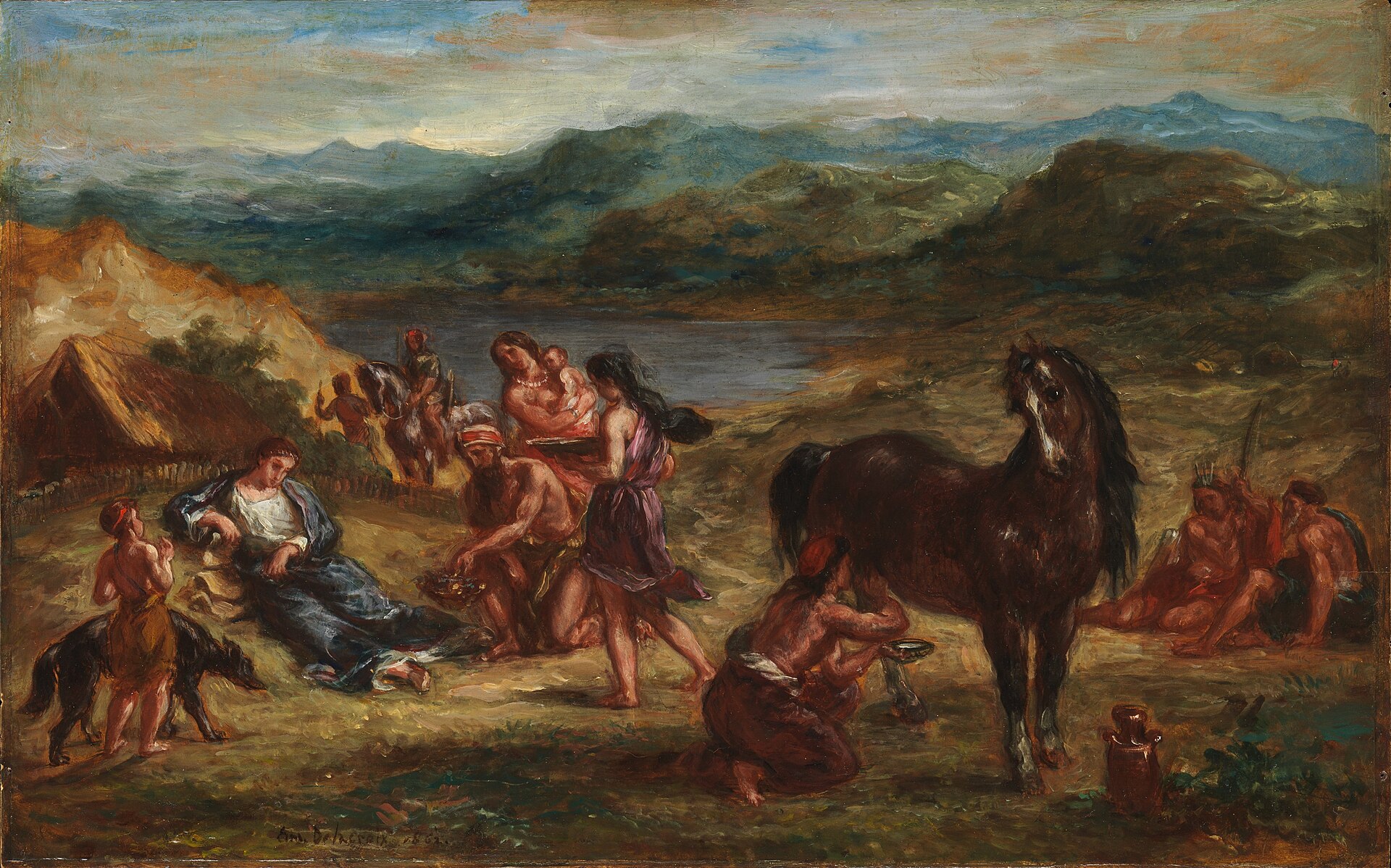 Eugène Delacroix, Ovid among the Scythians, 1862

Nevertheless, Ovid does not really say what Tomis was like outside winter.  Now called Constanța, it is a tourist destination and has 'a humid subtropical climate' with cool breezes in summer and warm autumns.  The treelessness Ovid complained about was true of his immediate location but if he had ventured further afield he would have encountered forests.  Presumably the dangers from the local tribesmen, with their poison-tipped arrows, prevented him leaving the town.  So this wasn't a poetic exile like some others that I have written about here - Xie Lingyun, for example, banished in 422 to the southeast coast of China, but able to draw solace from his walks in the mountains.  Ovid was trapped and desperate to leave.

I will end here with a few lines of Ovid's poetry, from Tristia Book III, written de profundis in his frozen hell.  The north wind screams and 'no comber will surge up from the hard packed flood' and Ovid sadly recalls those early autumn days when everything in Italy is ripening.


... No sweet grapes here beneath thick shady vine-leaves,
no frothing must to top up the deep vats;
no orchards, no fruit trees, no apple on which Acontius
could cut the message for his love to read:
nothing to meet the eye here but bare plain, leafless, treeless -
not the habitat any luckier man would choose -
and this, with the whole wide world's expanse to choose from,
is the region selected for my punishment!