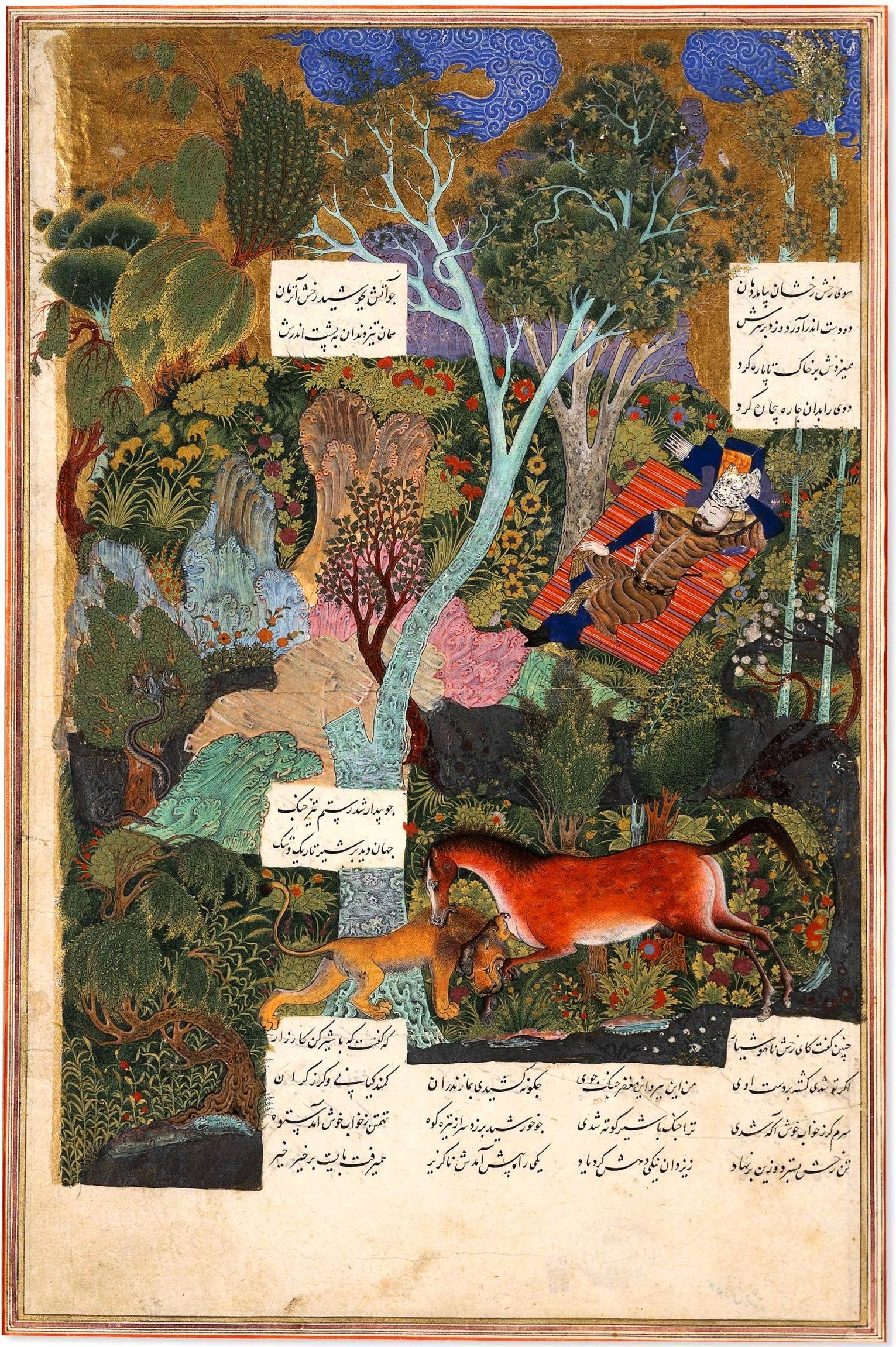 This painting is the only page that survives from a manuscript of the Shahnameh (Ferdowsi's 'Book of Kings') commissioned by the Safavid ruler Isma'il I (1501-24).  It is used for the cover of The Art and Architecture of Islam 1250-1800 by Sheila S. Blair and Jonathan M. Bloom.  They note that the lush vegetation serves to detach the dreaming hero from the fight between horse and lion, which becomes a kind of 'stylized ballet'.  This kind of vibrantly coloured, elaborately stylised and beautifully patterned landscape can be seen too in what is 'considered by many to be the greatest of all Persian miniature paintings', The Court of Gayumars.  This too is a scene from the Shahnameh and was in a book made for Isma'il's son, Tahmasp, who succeeded him at the age of ten and reigned until 1574.  King Gayumars, the first king of Persia, is depicted seemingly floating above a garden where animals coexist peacefully and courtiers stand, dressed in leopard pelts.  Rocks, clouds and water seem to be solid, immaterial and liquid all at the same time.  The closer you look, the more you see extraordinary details hidden in the flowers or among the coral-like cliffs.  Trees grow beyond the frame and in the top-most branches some monkeys seem to have climbed above the golden sky with its Chinese clouds and out of the world altogether.

In 1544 the painter Dust Muhammad wrote about the artists in Tahmasp's library, specifically praising Master Nizamuddin Sultan-Muhammad's 'scene of people wearing leopard skins' in the Shahnameh, which must be this painting.  'It is such', he said, 'that the lion-hearted of the jungle of depiction and the leopards and crocodiles of the workshop of ornamentation quail at the fangs of his pen and bend their necks before the awesomeness of his pictures.'  The Court of Gayumars is now in the Toronto Aga Khan Museum.  Blair and Bloom relate the later history of the great book itself, which included 258 paintings and was probably produced over the course of a decade from 1525-35 (one image is dated 1527/8).


'In 1567 the Safavid manuscript was presented by Tahmasp to the Ottoman sultan Selim II, and it remained in the Ottoman imperial collection at least until 1801. [...] By 1903 it had entered the collection of Baron Edmond de Rothschild, whose family sold it to an American collector in 1959.  The manuscript, which had survived intact for over four hundred years, was subsequently dismembered.  Individual folios were sold at auction like so-many slices of pizza, and the integrity of one of the masterpieces of Islamic art was ignominiously destroyed.' 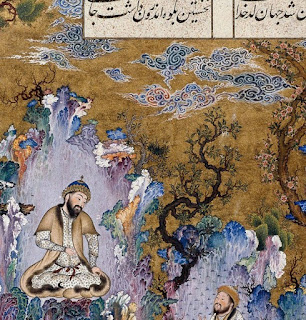 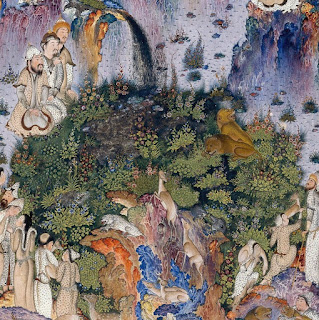 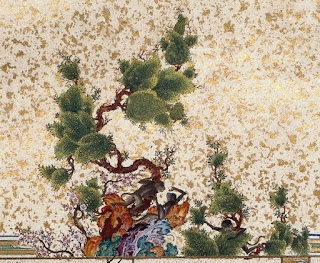