Pyramids in the Sea

If you haven't been yet, there are still two days left to make your way through the long David Hockney queues and see Tate Britain's Paul Nash retrospective.  His work may seem familiar from relatively frequent exhibitions and the permanent collections of the Tate and Imperial War Museum, but there are a few exhibits on show that I don't remember seeing before, including two borrowed from Canadian museums.  Monster Shore (1939) shows a shattered elm which Nash encountered while 'the declining sun suffused the evening sky to a brickish red; beneath which the Malverns piled up intensely blue.'  Those hills almost seem to belong in a different painting - T. J. Clark refers to this work in his partly critical LRB review as 'a Dali-plus-Ernst assemblage'.  The other painting from Canada, Dymchurch Steps (1924, reworked 1944), is centered on a concrete structure that would not look out of place on Ballard's Terminal Beach, Sebald's Orford Ness, or somewhere in Tarkvosky's Zona.  According to the curator Emma Chambers it is 'one of the most important works for understanding the beginnings of Nash’s interest in the metaphysical possibilities of architecture, and is among the earliest of a group of works which place a substantial architectural object having an uncompromising and mysterious presence in the centre of a landscape composition.'

'I wish the car had got into his paintings occasionally' writes T. J. Clark.  Figures too are largely absent, as Laura Cummings notes in her review of the exhibition.


'People do appear in his art, surprisingly often, but always as wraiths or surrogates. Far more haunting are nature’s figures, such as the two tiny trees holding still at the centre of The Pyramids in the Sea.  This irreducibly strange vision shows roiling seas by night, two pyramids dropped among them, and sand dunes metamorphosing into waves. It is a vision from the land of counterpane, made when Nash was scarcely 23. Yet it contains the future like a kernel – the intermingling of land and sea, the premonition of surrealism, the Samuel Palmer moon (long before Palmer was discovered in the 1920s) of Nash’s English nocturnes. Above all the bell-shaped waves that rise and fall across the picture, and all through the rest of his work.' 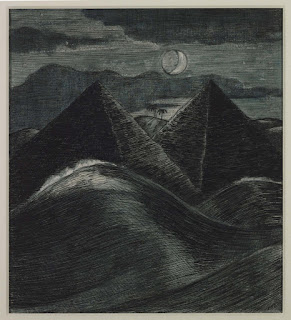 In his catalogue essay, 'A Spectral Modernity', David Mellor wonders if this picture may partly have been inspired by a writer Nash is known to have enjoyed, Algernon Blackwood.  In one of Blackwood's stories, 'Sand', an English explorer experiences the desert as if it were liquefied.  'Rising above the yellow Libyan horizon, gloomed the vast triangles of a dozen Pyramids, cutting their wedge-shaped clefts out of a sky fast crimsoning through a sea of gold.'  Mellor's essay traces the influence of spiritualism on Nash and his wife Margaret, who believed she was clairvoyant.  I wonder whether she considered Pyramids in the Sea a kind of premonition of their first meeting, a year after it was drawn.  Margaret spent her early childhood in Cairo and her father was an Arab, born near Jerusalem, who later moved to Oxford where he taught the undergraduate T. E. Lawrence colloquial Arabic.  Lawrence admired Nash's work - he bought his first painting of the sea at Dymchurch and asked him to provide illustrations for an edition of The Seven Pillars of Wisdom.  Ten years later Paul and Margaret Nash were about to visit Lawrence at Cloud's Hill when they heard the news that he had been killed.

After the war Margaret Nash wrote a memoir of her husband.  It was published last year in a new edition of Outline, Nash's unfinished autobiography and letters from the front which originally appeared in 1949.  It provides a moving insight into the way Nash endured his asthma attacks, caused, it was thought, by breathing in the poison gas at Passchendaele.  At the end of 1933 the couple journeyed south through France and Spain, having to stop periodically while Nash recovered his health.  They visited Matisse in his studio, where Nash had to put up with advice from the great man on using a rowing machine to help improve his breathing.  Eventually they reached Ronda in southern Spain, from where it was a short journey across the Straits of Gibraltar to Morocco.  'Here Paul felt very well, as we were greeted in that lovely April by a glowing sun and a light, refreshing breeze which came from the Atlas Mountains, still snow covered.'  They returned home with plans to try to go back to North Africa but sadly it wasn't to be, as Nash's health problems persisted and war eventually closed in again.  Nash went on to paint a sea of wrecked war planes in Totes Meer (1944) - evidence according to T. J. Clark of 'an artist at last sure of his ground'.  But he would never get to experience the moonlit waves of the desert.


This year, Paul Nash entered the public domain so I have returned to some earlier posts on this blog and added images of his paintings and drawings:
Nash is also referred to in other posts - to see these click on the 'Paul Nash' label below, consult the index or use the search box.
Posted by Plinius at 11:48 am