‘Brick-dust in sunlight. That is what I see now in the city, a dry epic flavour, whose air is human breath. A place of walls made straight with plumb line and trowel, to desiccate and crumble in the sun and smoke. Blistered paint on cisterns and girders, cracking to show the priming. Old men spit on the paving slabs, little boys urinate; and the sun dries it as it dries out patches of damp on plaster facings to leave misshapen stains. I look for things here that make old men and dead men seem young. Things which have escaped, the landscapes of many childhoods.’ – Roy Fisher, City, 1961 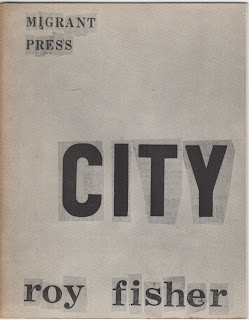 Roy Fisher passed away this week.  I thought I would remember him here with three quotations about landscape and place, taken from Interviews Through Time and Selected Prose, a book published by Shearsman in 2000, when Fisher was seventy.  In the first he is talking about City, the short sequence of poems and prose assembled for Gaell Turnbull's Migrant Press.  This drew on his experiences of Birmingham,


‘… a particular large nondescript undersigned city, which was a deposit of all sorts of inadvertent by-products of ideas.  In many cases the cultural ideas, the economic ideas, had disappeared into the graveyards of people who had the ideas.  But the by-products in things like street layouts, domestic architecture, where the schools were, how anything happened – all these things were left all over the place as a sort of script, an indecipherable script with no key.   And the interesting thing for me was that the culture, particularly the metropolitan culture, the literary culture, had no alphabet to offer for simply talking about what I saw all the time.’

This second quotation gives me an excuse to include a Paul Klee painting and is part of a discussion on how his work is positioned in relation to the poems of place written by Ed Dorn and Charles Olson (I have written about the latter here before).


‘I’ve been told that I’ve been influenced by Americans. An enormous number of people come to mind, some American, some not. You might just as well, for me, talk about Rilke’s Paris or Kafka’s Prague or the imaginary towns that Paul Klee made up or Kokoschka’s paintings of towns he worked in. […] Fascination with a location – I don’t want to duck out too hard from the American tag here, but it could as well be those little bits you get at the back of Italian primitive paintings, the cities on hilltops, as any sort of possibly theoretical concern with place, such as you get in Olson or Ed Dorn.’ 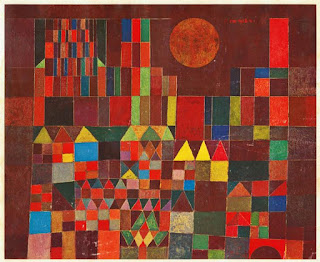 In this third one, Fisher contrasts his approach to that of a landscape painter.


‘I’m capable of being invaded by visual landscape, though I love visible landscape. […] The poem I write is the portrait of a mind, and the sense of the self, a sense of the world, which is responding to a landscape in such a way that the landscape doesn’t quite have a chance to congeal.  I dramatise.   I deprive the landscape of a painter’s vocabulary, where I’ll say ‘Several miles off, there is a little row of red roofs, and in the middle distance is this and that…’  In a fairly gentle way I’m dramatising the landscape to put dynamic lines in, so that there are certain imperatives – in fact, to energise, to potentiate events it.’

A lot more could be said about Roy Fisher and landscape.  As William Wootton wrote in the Guardian back in 2005,


'Much of Fisher's best work has been a poetry of place, and that place has tended to be the city of his birth. As he puts it in "Six Texts for a Film": "Birmingham's what I think with." In City (1961), whose verse and prose moves from dirty realism and detailed urban description to passages of hypnotic reverie, Birmingham has become an unreal, nameless city. In later works, the places of Birmingham are named almost religiously, as are rather different sites, notably the rural Derbyshire in which Fisher now lives. As one description follows another, a pattern of scenes builds up in the reader's mind, until we get what A Furnace (1985) terms a poetry of "landscape superimposed upon landscape". Individual places, too, can now look like palimpsests. Traces of forgotten fields and rivers are found lurking beneath the city. Vanished towns and industries are discovered in the countryside.'

In News for the Ear: A Homage to Roy Fisher (2000), John Kerrigan asked the poet about his changing attitude to the poetry of place (the interview has been republished in Jacket Magazine).  Fisher had said of City that it was to do with the ‘EFFECTS of topography, the creation of scenic movements, psychological environments, and it’s not meant to be an historical/spatial city entailed to empirical reality.’  Kerrigan put it to him that ‘on the evidence of ‘The Burning Graves at Netherton’ (1981), however, and parts of Birmingham River (1994), you have become more at ease with a ‘poetry of place’ which admits descriptive elements and even paysage moralisé’.  Fisher replied that ‘the landscape has come, with the passage of time and changes in my understanding, to moralise itself under my eye, without any nudging from me. I read it as a record of conduct as well as something subjectively transfigured.’

I will end here with a clip of Roy Fisher, filmed at his Derbyshire home.  He reads 'Birmingham River' (9 minutes in) and then 'For Realism' (1965), with its snapshots of the city: flats on the ridge getting the last light and 'afterimages of brickwork' as windows turning silver in the shadows...